From RationalWiki
(Redirected from Tom Friedman)
Jump to: navigation, search 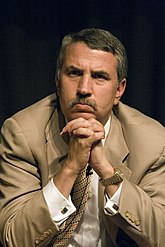 I mustache you all to remain calm.
Not to be confused with Milton Friedman.

Thomas "Moustache of Understanding"[1] Friedman (1953–) is an author and journalist at the New York Times. He's won the Pulitzer Prize three times: In 1983 for his coverage of Lebanon, 1988 for his coverage of Israel, and 2002 for his commentary on the War on Terror and its effect on the global political climate.

Friedman's columns are probably the definition of "your mileage may vary." On the plus side, he covers a lot of foreign and international affairs, something sorely lacking in much of the US media. He travels extensively and does a good amount of in-depth first-hand reporting. On the flip side, you'll also get a lot of limp, tepid, "Washington consensus"-type commentary (often bundled with analingus toward the powerful) repackaged as something deep and insightful. That's exactly the type he is — Friedman is touted as "the guy all the politicians and Beltway insiders read." That in itself makes him worth reading, right or wrong, though, as a barometer on just what the "Washington consensus" is.

Friedman is now infamous for his incessant cheerleading for the Iraq War and repeatedly failing to predict when the mission would actually be accomplished. See Friedman Unit. Interestingly, he skipped right past the trumped-up WMD charges Dubya made up and supported the war for the purposes of regime change. Guess he was ahead of the curve on that one!

This is somewhat contradicted by an earlier column. During the Gulf War, Friedman keened that "the best of all worlds" would be "an iron-fisted Iraqi junta without Saddam Hussein" that would rule Iraq pretty much the same way he did, but with the approval of Turkey and their masters in Washington. But for the time being, the Ba'ath party were too entrenched, so the U.S. would have to settle for second-best—namely, leave Saddam in power, so he could continue to rule Iraq with "an iron fist".[6] (He likes that phrase.[7])

About a month after the 9/11 attacks, Friedman expressed his confidence in Donald Rumsfeld and what he perceived as a revival of Vietnam's "madman theory".[note 1] In an interview with Charlie Rose in 2003, Friedman was asked if it was worth it, considering how out of reach peace within Iraq seemed. Friedman responded with a lecture on US society and claimed that there was a "moral bubble" in the United States in the 1990's which involved Americans being "okay" with terrorism (because Al Qaeda was definitely in Iraq). His gibbering tirade ended with:

It is not clear to the collective brainpower of RationalWiki what average Iraqis had to do with the moral failings of Americans nor how bombing (or torturing) them is showing that we care, but, admittedly, we are simple creatures who cannot comprehend Friedman's wise but mysterious ways.

Friedman has become the high priest of globalization apologetics over the past fifteen years or so. He rarely seems to find any flaws with the free trade agreements he speaks in favor of, probably because he didn't bother reading them. A salient quote on his stance on trade policy:

Being a champion of an agreement based on the title alone, and simply not caring in the least what's in the document even when confronted with his ignorance, is a baffling display of willful ignorance for a journalist that won the Pulitzer Prize three times. It's his literal job to read and understand what is in these documents, and make a critical opinion on it, so it might be reasonable to float removing half his salary since he's only doing half the actual work that's expected of him. This might not be surprising given Friedman's previous columns on globalization that lavish praise on globalization successes like a tiny start-up IT company in Bangalore that has never been found outside of Friedman's columns which is capable of replacing every job in the world through out-of-the-box connected know-how. He has later come as a champion of China in the global marketplace because of it is "led by a reasonably enlightened group of people",[9] as he states China's Autocracy is superior to America's Democracy in global competition, while other columnist decry his value of economic growth over human rights and life.[10][11] There is nothing besides their leadership, such as production accomplishments or innovative ideas, that gives an impression of what he wishes to change to make the US competitive like China. In response to the possible criticism that this will result in everyone else in the world being unemployed, or will be placed in abusive working conditions, his answer is always that people will "need to be more innovative." Thankfully, software has been developed to write automated Friedman columns so Thomas might be able to show the world what he means by that.[12]

Friedman has been such a vapid champion of so many things he knows little about that Alexander Cockburn of the New York Press to call him a "Hot Air Salesman".[13]

Friedman should only be ingested in column-sized doses; levels of Friedman beyond that are potentially fatal. His books tend to be a melange of the latest buzzwords, orgasms over the newest office tech toys, and a whole bunch of metaphors and similes that pile up to incredibly asinine heights of literary incompetence. Should you somehow feel the need to read a Friedman book, make sure it comes with a translation device. A peek at a few of his "insights" from The World is Flat:

George Carlin never knew it, but he actually composed a poem summarizing a Friedman book.

The Lexus and the Olive Tree[edit]

Friedman proposed the Golden Arches Theory of Conflict Prevention, in his 1999 book:

It was, unsurprisingly, contradicted on:

However, the argument that the observation theory was pushing wasn't so crazy:

A year later, the book received a revised edition, with Friedman commenting on the criticism:

A Friedmanism is a specific variety of false equivalence, in which a pundit criticizes both sides of a conflict on an issue, while espousing the views of one side.[18] The phenomenon is so named because of Friedman's frequent urging of the creation of a new political party that would espouse a certain set of views...all of which are actually already held by Democrats. Friedman seems to blame Democrats for the obstructionism of Republicans.

Friedman first proposed his Golden Arches theory of conflict in 1996, stating, "No two countries that both had McDonald's had fought a war against each other since each got its McDonald's. The McDonald's folks confirmed it for me. I feared the exception would be the Falklands war, but Argentina didn't get its first McDonald's until 1986, four years after that war with Britain."[20] The claim was already false in 1989 if one accepts the United States invasion of Panama

as a war.[3] In any case, three other wars have subsequently been fought between McDonald's-bearing countries.[3]