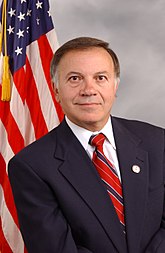 Democrats don't need to make up scare stories about the GOP. They have it right in front of them!

Tom Tancredo (1945–) is a former Republican Congresscritter from Colorado and a noted racist, who was named one of the Ten Worst Congressmen in America by Rolling Stone Magazine in October of 2006.[1] Tancredo, the grandson of immigrants, has called for the end of all illegal and legal immigration to the United States.

Tancredo ran for President of the United States in 2008 in the Republican primary but did about as well as Alan Keyes and Duncan Hunter.[2] He announced his retirement from Congress soon after dropping out of the race.

During the 2008 Republican debates, he distinguished himself by invoking Jack Bauer, a fictional television character who tortures suspects, as a role model for how to deal with terrorism suspects. This was shot down by John McCain, who is not only a victim of "enhanced interrogation techniques" but also living proof of their ineffectiveness (when his captors demanded the names of his squadron mates, he gave them a bunch of NFL players, and they were none the wiser). He has also called for dropping a nuclear bomb on Mecca in the event of any more 9/11-style terrorist attacks on the U.S.

On 14 April 2009, Tancredo appeared at UNC-Chapel Hill at the invitation of the local chapter of Youth for Western Civilization. Community members showed up to demonstrate against the xenophobia he was advocating, including students unfurling a banner in the room where he was speaking and a crowd chanting outside. When the crowd didn't disperse, campus police doused them in pepper spray and threatened them with tasers.[3] Much of the dialogue afterward revolved around Tancredo's right to free speech. This is puzzling since he was free to speak - what he didn't get was a cooperative audience, which he is not entitled to. It is also ironic considering that the free speech of protesters was abridged by the use of chemical weapons by agents of the state. One student, who had been holding a banner, was later arrested and also received abusive communications advocating for her rape and murder[4] and has been variously abused on StormFront and Metapedia.

In 2010, while Tea Partying, he stated he'd like to bring back the literacy test to the United States' electoral process and that Obama would have never been elected if this test were in place. Nope, not racist!

During the event, he also said of Obama, "If his wife says Kenya is his homeland, why don't we just send him back?"[5]

Later, in 2010, he gave an ultimatum to both Republican candidates in the primary for governor of Colorado to drop out, presumably in the hope the party would anoint him their candidate instead, or else he would run against them on the Constitution Party line. This led to an amusing shouting match on TV between Tancredo and the head of the Colorado Republican Party, who asked Tancredo about his upcoming third party campaign, "What are you going to talk about? Impeach Obama and bomb Mecca?" Both Republican candidates blew him off and he entered the race as a Constitution Party candidate. After effectively fragging marginalizing himself in this fashion, he's recently decided to go for the wingnut gold medal and speak at a conference organized by the Council of Conservative Citizens.[6]

Incredibly, even after all this Tancredo still managed to win 36.43% of the vote in Colorado's 2010 gubernatorial election, more than three times the number of votes for the Republican candidate, upgrading the Constitution Party to "major party" status for the first time.

Demonstrating that a stopped clock is still sometimes right, he supports the legalization of the wacky tobacky and, while in Congress, tried attaching an appropriations amendment every year to forbid the U.S. Justice Department from spending money to enforce any federal drug law contradicting state law.[7]