Did you scale the image down first? It might be too big. If that doesn't work, you can head to RationalWiki:Technical support or I could just try to upload the image for you.—Kazitor, pending 04:51, 23 March 2018 (UTC)

Alright, done. It was only 937 KB and didn't need scaling, so I'm not sure why you were having an issue. Did you create an account after trying the first time, but didn't refresh the page to make it register as being logged in? I have no idea. —Kazitor, pending 06:53, 23 March 2018 (UTC)

Q: "Oh, and why do sunrises start ad the top of mountains and gradually climb down, instead of at the bottom and climbing up?"

Sorry but I don't really get this. Mostly due to the grammatical errors, I couldn't understand what you were trying to point out.Řïmũŗû Ţèmpéŝţ

well first, I have somewhat clumsy fingers. it should say "at the top" not "ad the top." second, have you ever watched a shadow climb up the side of a tall building during sunset? I'm basically talking about the inverse.Skadooshbag (talk) 22:18, 6 April 2018 (UTC)

Message from the RationalWiki Ministry of Demotion and Personal Impediment[edit]

It seems there is some confusion regarding the AiG articles. They are not meant to criticize Christianity as a whole, merely the very narrow version of Biblical literalism AiG promotes. I thought I'd try to clarify that, to avoid further edit wars on AiG related articles. ☭Comrade GC☭Ministry of Praise 23:53, 3 January 2019 (UTC)

I was entirely aware of that. It's just that I, at first, had a misunderstanding as to the precise nature of the argument we were fighting over. I was not trying to defend AiG, merely making sure all our weapons against them were up to code, if you will. I am glad we sorted this out.Skadooshbag (talk) 00:10, 4 January 2019 (UTC)

It was frequently used to promote racist ideas, yes, but the concept of judging one's personality based on how their head is shaped is not inherently racist (but still complete baloney). The nazis used genetics to promote racist ideas, but few people would argue that this makes genetics an inherently racist field. Once the Nazis were defeated, geneticists began pruning away the racist ideas that the Nazis had added; were it a valid science, phrenologists would likely have done the same. An example of an inherently racist pseudoscience would be Melanin theory, which was founded in racism, so someone who tried to prune back the racist ideas would wind up uprooting the entire plant.Skadooshbag (talk) 20:38, 13 May 2020 (UTC) 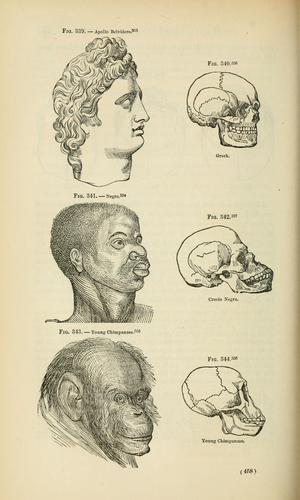 The Nazi's didn't make this, therefore this chart is not racist!

Why are you implying that Nazis were the only significant racists? You are lying grievoisly by omission when you fail to mention the abhorrent scientific racism of the 1800s and phrenology's role in it.𝔖𝔲𝔪𝔪𝔞 𝔄𝔱𝔥𝔢𝔬𝔩𝔬𝔤𝔦𝔠𝔞 (𝔮𝔲𝔢𝔯𝔢𝔩𝔦𝔰) (𝔰𝔠𝔯𝔦𝔭𝔱𝔲𝔯𝔞) 21:27, 13 May 2020 (UTC)

If this whole conversation was related to this as well as an attempt at explanation, I don't see a big deal. The reverted edit didn't seem necessary (too vague also, who's "some people"?), but it's certainly not enough to carry these accusations here. --It's-a me,

"...the clouds start to rain honey and/or human blood."[edit]

Where do we get the monkeys and trolleys? ☭Comrade GC☭Ministry of Praise 01:30, 1 February 2022 (UTC)