From RationalWiki
(Redirected from Viscount Monckton)
Jump to: navigation, search

A smug creature with enormous sums of money.

One Guardian commenter said "If he didn't exist you really would have to invent him." It's not entirely clear the amusement gained would be worth it... wait, Sacha? Is that you?

In his role as UKIP science spokesman, Monckton said that they would cut funding for climate science unless there arose "sufficient evidence" to change his mind. He also said that health risks associated with excessive salt consumption are merely "unjustifiable fears" and compared embryonic stem cell research to "the killing of very small children."[4] Monckton is a big promoter of the global warming conspiracy theory in which Barack Obama will cede US sovereignty to the United Nations, which will then enact a communist world government,[5] citing Agenda 21 as reasoning for his claims.[6] But Monckton doesn't "want to be bracketed with" the likes of David Icke, whom he considers "far-out" with views "so far from common sense and rationality that really, in the old days he'd be locked up as a lunatic".[7]

His views on disease aren't much better. He wrote an article entitled The Myth of Heterosexual AIDS for a 1987 edition of American Spectator, stating quite clearly:[8]

He has since conceded that this would presently be unfeasible, but not that it would in any way have been a bad idea.

At least he considers alternative medicine should only be NHS-funded after it has been proven clinically.[4]

According to him, scientists "perhaps" should be required to certify that they are Christian belong to a religion before they are allowed to practice. No kidding:

Monckton likes to claim he has "peer-reviewed" publications under his belt. What he's usually referring to when he says this is an article he had published in the American Physical Society's Forum on Physics and Society issue of its newsletter. In fact, the first sentence of the article is part of an editor's note reading "The following article has not undergone any scientific peer review since that is not normal procedure for American Physical Society newsletters."[10] Not that it would have gotten past peer review,[11] as just about every sentence contained an error.[12]

In an October 2012 opinion column on World Net Daily in which he insists climate change had nothing to do with Hurricane Sandy, he claimed to be "an appointed expert reviewer for the forthcoming 'Fifth Assessment Report' to be published by the United Nations’ Intergovernmental Panel on Climate Change."[13] Blogger Graham Readfearn contacted the IPCC secretariat on how one is "appointed" to be an "expert reviewer." The reply he received follows:

Monckton's father Gilbert was one of those kicked out in 1999 when the hereditary complement of the House of Lords was cut to 92, thus leaving Christopher's status as Viscount of Brenchley a matter only of interest to the aristocracy nerd contingent on Wikipedia. Since Christopher inherited the title in 2006, he has consistently misrepresented himself as being a member of the House of Lords. He has various pseudolegal theories as to why this is the case, usually revolving around the notion that a hereditary peerage can only be withdrawn by the Crown on an individual basis, as the letter patent was granted on an individual basis.[15] This may well be true, but has nothing to do with whether said hereditary peer gets an automatic seat in the upper house of the Parliament of the United Kingdom.[16] The main point appears to be to represent himself in other countries as having governmental power and status that he does not when talking up climate change denial.

The House has asked that he desist in his frequent habit of implying, or outright claiming, to be a member in any way whatsoever. They have also requested, rather forcefully, that he stop using a personal insignia closely resembling the portcullis insignia of the House of Lords, and are presently '"taking steps with a view to ensuring that Lord Monckton does not in future either claim to be a member of the House or use the parliamentary emblem or any variant thereof."[17] Buckingham Palace (who control use of the insignia) did not directly comment on the claims, but just happened to point an enquiring journalist at the relevant trademark laws and the possible penalties for their violation.[18]

The House finally got fed up and wrote an open letter to Monckton in July 2011, telling him in unusually blunt language that "you are not and have never been a Member of the House of Lords."[19]

While Monckton is not a member of the House of Lords, he's still a hereditary peer and "Lord Monckton" is one of the correct ways to address him.[20]

Before Tim Lambert of Deltoid fame appeared at a live debate with Monckton, he noticed that Monckton had been quote mining a paper by atmospheric scientist Rachel Pinker and her colleagues by using a figure they calculated for surface solar radiation to stand in for total climate sensitivity. Lambert then played a recording of her letter explaining Monckton's misuse of her work during the debate.[22] However, that didn't stop Monckton from quote mining the paper again in Congressional testimony, which prompted another response from Pinker and co-author Ellsworth Dutton.[23]

John Abraham, a professor of thermal engineering at the University of St. Thomas, Minnesota, created and published on-line a presentation[24] debunking a talk delivered by Monckton in October 2009 at Bethel University in Minnesota. When the rebuttal gained attention, Monckton wrote a hilariously lengthy and pompous reply (466 questions!),[25][26] accusing Abraham of libel (among other things) and demanding a retraction, an apology and large donations to a charity. To top it off, in an interview with Alex Jones (yes, that one!), Monckton kept it classy by calling the university a "half-arsed Catholic Bible college" and its president a "creep."[27]

Abraham's laconic reply makes the whole thing reminiscent of the Lenski affair. In its entirety:

In February 2011, Peter Hadfield debunked Monckton's presentation's misrepresentations point by point in a series of YouTube videos under his account potholer54. Monckton replied on Watts Up With That (WUWT) to a comment by a WUWT reader briefly summarizing some of Hadfield's points. Peter Hadfield approached the owner of WUWT, Anthony Watts, about having a debate on the website, and Watts agreed. Monckton was given the opening statement.[29] Hadfield's response was published under the same article in an update. Monckton, despite promising to Watts that he would respond, never did. After a few months, Hadfield and others began calling out Monckton on his rather obvious retreat from the debate. Watts conjured up a reason to pull the plug on the debate, conveniently excusing Monckton from having to reply. A comment moderator at WUWT then announced a policy that any comments mentioning Hadfield would be deleted.[30]

Lawrence Torcello, an assistant professor of philosophy at the Rochester Institute of Technology, wrote an article addressing climate change denialists as "criminally and morally negligent."[31] Many conservative outlets including Breitfart and Infowars misrepresented his article, instead saying that he had called for climate change denialists to be imprisoned. Monckton wrote a letter to the Provost of the university asking if he was a "fit and proper person to hold any academic post at the Institute" and calling for action to be taken against the professor.[32][33]

Monckton: The last refuge for the deniers[edit]

With the Climategate brouhaha debunked and plagiarized "research" like the Wegman Report discredited, Republicans got really desperate. In 2010, Monckton was called as the only witness for the GOP at a subcommittee hearing on climate science. During Monckton's pathetic testimony, Rep. Jay Inslee (D-Badass) issued a definitive smackdown right in front of the entire committee, saying:

Inslee went on later in the testimony:

On top of that, twenty-one climate scientists issued a lengthy rebuttal to Monckton's testimony.[35]

Monckton, who married in middle age and has no children, and whose coat of arms features a camp pink portcullis, has made a series of inflammatory homophobic statements.

Uninvited spokesman for Burma at Doha[edit]

Monckton's behavior and pronouncements have earned him the nickname "potty peer" in various corners of the blogosphere. Consider the episode in which Monckton found himself booted from the Doha Climate Change talks for taking the unoccupied Burmese delegate's chair and addressing the speaker for a minute from the microphone. Earlier he had been seen dressed in traditional Arab garb handing out climate change denial leaflets.[39]

Monckton is a keen user of the Internet, an IP address geolocating to just near him having added all manner of strange claims (e.g., that the Guardian had paid him £50,000 in settlement of a defamation claim) to the Christopher Monckton and George Monbiot articles on Wikipedia.[40] Monbiot, a long-term critic of Monckton, asked him what was up with that and got a series of nonsensical evasions in response.[41]

Monckton has claimed since 2007 to be a Nobel Peace Prize winner. When cornered, he said he was merely joking, although he had claimed several hours before to be a Nobel laureate in apparent seriousness;[43] the claim is still present on the staff page of the Science and Public Policy Institute.[44]

Monckton also is a birther,[46] though he claims not to be.[47] Monckton has since dropped all pretenses and now states that Barack Obama was born in Mombasa, Kenya.[38]

and has claimed that he was her scientific advisor. That claim was shot down by John Selwyn Gummer, Environment Minister in Thatcher's cabinet, who referred to Monckton as a "bag carrier" whose views were taken seriously by nobody.[48] His name was also conspicuously absent from Thatcher's memoirs, The Downing Street Years.[49]

Lord Monckton proposed banning public recitations of portions of the Qu'ran, under Anglo-American jurisprudence which criminalizes incitement to murder.[50] Clearly, the sections of the Old Testament which incite murder don't count, eh Monckton?

Lord Monckton has been involved in the Tea Party movement for a number of years now,[2] with a specific fondness for Texas,[51] fooling Americans GOP supporters into thinking he's smart because he uses big words and talks in a toffish British accent.

Following Brexit in the United Kingdom, Monckton spoke to The Daily Caller about the possibility of Texan secession from the United States in order to increase border security,[52] although he has mocked The Donald's plan on building a "Great Wall of America".[53]

Apart from being a repellent bog creature with buckets of cash, Monckton is also an amateur mathematician. He invented a puzzle called The Eternity Puzzle and challenged anyone to solve it, offering a £500,000 prize and expecting it would take many years to solve, if ever. Embarrassingly only a year later had to pay the prize money out of his own funds to two mathematicians who solved it using a computer program. Monckton claimed that the earlier-than-expected solution had forced him to sell his 67-room house, Crimonmogate, to pay the prize — a true Pyrrhic victory.

A new version of the puzzle has since been released, called Eternity II. This new version was designed with the help of the mathematicians who scooped up the prize for the first version, and with the assurance that the new version cannot be solved with a simple computer program. Indeed, the deadline for the contest passed with no one claiming the prize, although the contestant who got closest got a consolation prize.

The peak of schilling is cleverly offering to drink weedkiller, before calling the interviewer stupid and begging to change the subject. In fact, Roundup is NOT safe to drink, unless you're Lizard people.[citation NOT needed]

So, what's with his eyes?[edit] 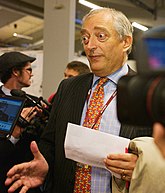 the same thing Marty Feldman had. (Though in the BBC documentary "Meet the Sceptics" from 2011, he claimed to have cured himself of Graves'.)[54] There are a lot of reasons for which Monckton should be mocked, but his eyes are not among them. Why not mock him wearing a "Make America Great Again" hat instead?