A New Radical Centrism is an American Islamophobe and alt-right HBD-pseudoscientist. He uses Twitter and is a Facebook admin of a group dedicated to discussing race and intelligence who re-labels and re-packages his far-right views as "centrist". Little is known about his real identity, except he lives in the US.[1]

A New Radical Centrism is obsessed with immigration and race and 99% of his Twitter posts are on those topics.

The group on Facebook is private and has 400 members.[2] 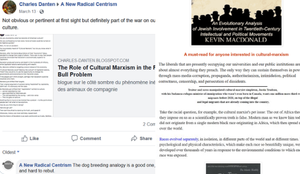 A single post was made public and contains anti-Semitic conspiracy theories about cultural Marxism:

Tellingly, despite purporting to be centrist, A New Radical Centrism only criticises left-wing politics, not the right; according to the Facebook description of the group:[4]

A New Radical Centrism draws upon the tradition of centrism, with its appreciation for data and science and reason, and also that of radical centrism, which seeks to reform political processes and practices that constrain maximum democracy, but it then goes one step further by questioning centrism's traditional faith in certain social institutions –- in particular, academia and the major media, which we believe to have been corrupted by the contemporary progressive-left.

A New Radical Centrism seeks to challenge and expose the unscientific basis of the progressive-left's foundational blank slate philosophy which posits that group differences arise purely from the operation of “oppressive structural forces” such as racism and sexism. We believe that this argument cannot hold up to rigorous scientific and statistical analysis.

A New Radical Centrism's views are pretty much standard alt-right or white nationalist:

See the main articles on this topic: Racialism and IQ

A New Radical Centrism is a critic of white females who are voluntarily childless for concerns about the environment and climate change:

Instead he supports conservatism because white female conservatives have higher fertility rates than liberals:

A New Radical Centrism opposes immigration from populations with "lower average IQs" (which he equates with nearly all "non-Europeans" such as blacks and Hispanics):

However, A New Radical Centrism might have a fetish for North-East Asian women (not uncommon in the alt-right), since he makes a sole exception for NE Asian immigrants:

See the main articles on this topic: Racism and Islamophobia

A New Radical Centrism claims to be a centrist and have 94% "openess" despite being anti-immigration and tweeting Somalis cannot support themselves and will leach off of welfare benefits.

A New Radical Centrism's Twitter page is chock-full of racist tweets such as:

Relying on cherry-picked statistics, A New Radical Centrism has claimed "blacks commit far more violent crime than whites at *all* income levels".[19] He dislikes Muslims, arguing: "The net impact of Muslim immigration has been negative in every European country that I'm aware of."[20]

Alt-righters pretending to be political centrists is not unique to the a_centrism twitter account; several of his online associates do the same thing, including Anatoly Karlin and Emil Kirkegaard. It seems though to have fooled very few people who by mistake followed the account, but then read a_centrism's obsession with race and intelligence, to unfollow:

A New Radical Centrism's usual response to people who point out the reality that he's alt-right, is to claim this is left-wing bias.[29]

However, more moderate right-wingers have pointed out he's to the right of them: