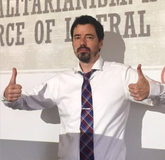 Bo Winegard (1980–)[2] is an American hereditarian psychologist[3], nationalist[4] and pseudoscientist[5] associated with the online "race realist" community.[6] He writes discredited racialist pseudoscience articles for the right-wing online magazine Quillette[7][8][9] and surrounds himself with white nationalists and racists but complains if he is labeled either of these, instead preferring the terms "ethno-traditionalist", "cultural nationalist", and "racial realist".

He was Assistant Professor of Psychology at Marietta College but was fired in March 2020.[10][11] Winegard believes that race is a biological reality, genetic factors predominantly explain group-differences in IQs, and skull shapes and measurements can determine human races by continental ancestry.[9][12][13] He promoted these dubious-to-pseudoscientific ideas in a Quillette review with Noah Carl in June, 2019.[9][14]

Winegard spends most of his time on Twitter talking about race and the alleged evils of left wing bias in academia. He commonly retweets Steve Sailer, Nathan Cofnas, Charles Murray, Noah Carl, Emil Kirkegaard, James Thompson, A New Radical Centrism and other so-called "race realists". Winegard identifies as a member of the alt-center which is basically an attempt by white nationalists or alt-right to re-brand themselves as political moderates.[15]

Making up his politics

Winegard is somewhat flip-floppy on politics, resembling typical "centrist" anti-SJW Internet figures such as Sargon. In June 2019, he claimed to be a political centrist and opposed to conservatism.

I generally don't share the political beliefs of conservatives, because I am too liberal on a number of issues, but I don't like progressivism either. So I float around somewhere in the center.[19]

In August 2019, however, he described himself as a conservative.

Agreed as a moderate conservative.[20]

In the same month he also identified as supporting the right:

Somebody needs to create the right-wing alternative to Rage Against the Machine, a band that rages about order and disciplined markets and Edmund Burke. That would be truly alternative and unique. And the band wouldn’t be making millions while calling for the Marxist revolution.[21]

And yet, Winegard still labels himself "alt-center". And despite his insistence that he is too liberal, his tweets often fall opposite of standard liberal positions (though they may try to imply moderation through advocating vaguely liberal-sounding ideas):

I am an immigration restrictionist in the Rich Lowry sense of the word.[22]

Winegard now identifies as both white and nationalist.[4]

It makes me white AND a nationalist.[4][note 1]

In February 2020, Winegard posted that he was leaving the Democratic Party.[24]

So, the left has become more and more alien to average Americans. It promotes ludicrous beliefs that even very liberal people who are not among the initiated find distressingly bizarre. Many of my older friends are completely astonished at how strange Democrats sound today.[25]

In March 2020, Winegard posted that he opposes political correctness.[26] 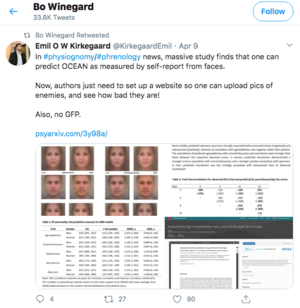 Winegard continues to re-tweet and support Emil Kirkegaard, as recently as 9 April 2020.

Winegard has supported Emil Kirkegaard, an individual who has been described as "so toxic in mainstream academia that even being associated with him can sink your career."[27] Kirkegaard is a self-described eugenicist and white nationalist who claims Western governments should be paying white people to breed more. In a bunch of tweets, Winegard originally defended Kirkegaard, claiming he has seen no evidence Kirkegaard is a racist:

I have absolutely no evidence that he is [racist]. I consider him a friendly colleague. And I like him. But you welcome to ask him his views and to assess for yourself.[28]

His claim that he has seen no evidence that Kirkegaard is a racist is bizarre, considering that Kirkegaard's Twitter feed is chock full of racism, sexism, Islamophobia, transphobia, anti-immigrant propaganda (e.g. describing Muslims as "terrible immigrants to get"), alt-right memes and general white nationalist sentiments (such as wanting to increase white fertility rates). After this evidence was posted,[29] Winegard slightly tried to distance himself from Kirkegaard, now claiming he doesn't share all his views:

I think Emil is uninhibited, shall we say. I can understand if some people were offended. But, I personally generally like him as a human, although I do not agree with everything (or nearly everything) he says.[30]

I recall the time Bo said he saw no evidence Emil Kirkegaard harbored any racist views. Then @dbweissman posted these [proof].[31]

If we owe the future a decent planet, don't we also owe it more children? So many people have been terrified into believing that more children will destroy the planet. But the opposite is likely true: When the population shrinks, it leads to many deleterious outcomes.[32]

Winegard clarifies his above comment and concern is specifically only countries below sub-replacement fertility (2.1 TFR), meaning (excluding a few countries in East Asia i.e. Japan, Singapore and Korea), the whole of Europe.[33] This a key obsession of white nationalists (such as Brenton Harrison Tarrant, the perpetrator of the Christchurch terrorist attacks, whose manifesto called for white Europeans to increase their fertility rates above 2.1).[citation needed]

In September 2020, Winegard criticised a OnePlanetOneChild advert that promotes one child families, writing:

Winegard has no children of his own despite being 40 years old and has been criticised for hypocrisy by his own Twitter followers.[35]

Curiously, Emil Kirkegaard, out of psychological projection, has criticised Winegard for his hypocrisy, i.e., promoting pro-natalism views when Winegard has no children of his own,[36] yet Kirkegaard himself does the exact same thing and is childless. 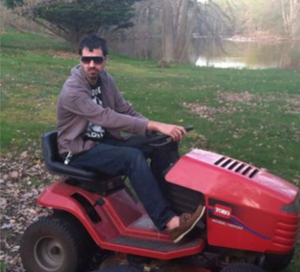 Winegard has defended white nationalism, albeit under a different name:

There are people who are what Eric Kaufmann calls ethno-traditionalists who fear rapid demographic change. I don't think it's useful or morally laudable to call them racists or white nationalists.[37]

After receiving criticism and being described as a white nationalist, Winegard further repackaged his ethno-traditionalism:

1/ Thread. In defense of cultural nationalism.

Nationalism is a divisive topic. Many progressives view it as a moral failure, a lapse into atavism that we should strive to overcome. I disagree. Here's why.[39]

Winegard with two other co-authors, including his brother Benjamin (aka Ben) Winegard, published a peer-reviewed paper titled "Human Biological and Psychological Diversity" defending race in Evolutionary Psychological Science.[40] The article section "Race and Human Populations" is rebutted below.

On October 24, 2019, Winegard gave a controversial seminar "The Evolution of Human Diversity" for the Evolution Working Group at the University of Alabama. His research was criticized as racist and for "resembling the pseudoscience employed by eugenicists."[5]

Thomas Tobin, co-chair of the Evolution Working Group, released a statement that apologized for the event and admitted it was a "mistake to invite this speaker".[5] Part of the statement read:

We, the members of the Evolutionary Working Group (EVOWOG), want to make clear that we do not endorse the views expressed by Dr. Winegard, which are non-scientific. We want to apologize to anyone who attended the talk, as well as anyone in the campus and local community who felt unwelcome because of the subject of the seminar.[5]

A student at the seminar called Winegard a racist. “OK, that’s fine,” Winegard said in response.[5]

In March 2020, Winegard was fired from his job as Assistant Professor of Psychology at Marietta College. He later threw a tantrum on the right-wing Internet rag, Quillette, stating that "many people disagree with my views about human population variation, about conservativism, about immigration, about economics, indeed about almost everything," and complained his sacking was an attack on academic freedom.[11] Yeah, right.

Winegard has alleged that an anonymous person sent emails to his college department containing screenshots of some of his offensive tweets. He blames these emails for his sacking.[44] This person, AfroSapiens (an anti-racist activist), later posted a screenshot of one of the emails he sent to Marietta College.[45] Winegard's associate Emil Kirkegaard controversially posted that he would pay a $200 "bounty" to anyone who can identify AfroSapiens.[46]

Various alt-right, conservative, and white nationalist bloggers have supported Winegard and attacked the college: Kirkegaard, Rod Dreher, Steve Sailer, and Toby Young.[44][47] Dreher incorrectly stated that "Marietta College fired him because he had become the target of a woke mob."[48]

The college has not released any public statement.

Winegard dislikes RationalWiki, claiming this page is mendacious and somehow contains lies and misrepresentations, despite not actually pointing out what these are.[49][50]

As an example, Winegard complains that RationalWiki describes him as a pseudoscientist:

However, Winegard's views on race are rejected by mainstream science and are highly dubious, using flawed methodologies, so pseudoscientist is hardly an inaccurate description.

Winegard further complains, "I have made no attempt to “surround” myself with “white nationalists”. Most of my friends are liberal to progressive." However, this claim appears to be contradicted by a glimpse of his social media: most of his tweets fixate on race, and he commonly retweets individuals associated with the HBD online movement who hold alt-right political views.

Winegard complains RationalWiki equates "ethno-traditonalism" with "white nationalism", but these are the same thing, just a different label; Winegard provides the following definition of "ethno-traditional nationalism" by linking to an article by Eric Kaufmann:

...seeks to protect the traditional preponderance of ethnic majorities through slower immigration and assimilation but which does not seek to close the door entirely to migration or exclude minorities from national membership.

as the viewpoint: "white people should maintain their majority in majority-white countries, maintain their political and economic dominance, and that their cultures should be foremost". This appears to be virtually identical to "ethno-traditonalism".