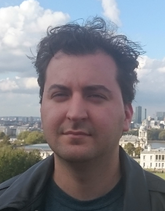 Anatoly Karlin (Анатолий Карлин)[1] is a Russian nationalist and anti-Semitic neoreactionary with alt-right and white nationalist views. He is a blogger for The Unz Review where he promotes eugenics and human-biodiversity pseudoscience to far-right nationalists and skinheads in Russia. His writings have been reprinted by Russia Insider

with his permission and he is quoted in right-wing publications. The SPLC have described Karlin as an "anti-Semitic blogger".[2]

Somewhat of a pseudo-intellectual, Anatoly Karlin (Russian: Анатолий Карлин) has a Google Scholar page, despite having zero peer-reviewed publications.[3] Elsewhere he has described himself as a "journalist".[4] Yet there's no evidence for this and the only websites he writes for are alt-right and anti-Semitic, primarily The Unz Review where he has his own blog column. He claims to have studied Political Economy at UC Berkeley and at one point was also living in UK, but has since returned to live in Russia; he labels his political views as "Russian nationalism".[5]

Karlin notes that he had become a "race realist" in 2012 and began blogging about HBD-themes since then.[6][7] His blog promotes Richard Lynn-type pseudoscientific theories about race and intelligence.[8] Like Lynn, Edward Dutton and many other so-called proponents of HBD, Karlin has a fixation with penis-sizes, claiming "average penis size (large – Africa; Latin America; small – East Asia). The latter example isn’t nearly as… flippant as it seems, since testosterone levels have a large effect on behavior."[9] Despite Lynn used dubious and falsified data, this doesn't seem to bother Karlin.[10]

Karlin is envious of more successful alt-right bloggers and vloggers; in an article he complains his content gets far less views than The Golden One, who he binge-watches.[11] 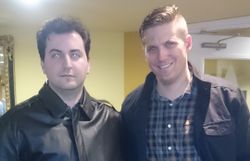 The Burkean an online conservative publication controversially published an article defending race and intelligence pseudoscience in February, 2019 "thanking" Karlin as a source saying; The Burkean's rebrand this year has been matched by an ominous shift away from conservatism and into populism... More troublingly still, the article credits Anatoly Karlin, a well known member of the Russian far right who has appeared at events alongside American white nationalist Richard Spencer, as the source of many of the ideas expressed in the piece.[12]

in the 2018 Russian presidential election.[13][14] Karlin has said he main political goals as a Russian nationalist are "An end to mass immigration from Central Asia" and "no more prosecutions for hate speech".[15]

Karlin has said he considers "Franco a national hero who saved Spain from Communism."[17]

In a controversial article, Karlin praises the fascist dictator Benito Mussolini, arguing he "did nothing wrong".[18]

After Karlin started blogging about HBD, his website attracted white nationalists and other racist basement dwellers in the comments section. Instead of deleting or censoring their racist comments like any normal person would do, he wrote a blog post "Policy On Racism" mostly defending them. According to Karlin the boundary between "race realism" and racism is blurry and because of that, "I will not as a general rule be censoring racist comments, unless they are couched in the most explicit and offensive language."[21] In the same post, Karlin bizarrely writes: "arguing on the basis of statistics that apartheid wasn’t all that bad for Black South Africans probably isn’t racism."[22]

In comments on his Reddit and Disqus accounts, Karlin is explicitly and openly racist; he has mentioned how much he dislikes black people who he describes as violent with low IQs and that he is happy so few live in Russia; elsewhere he has described his opposition to Islam and Muslim immigrants.[23] He is a proponent of the Eurabia conspiracy theory.[24]

I am quite happy that few Blacks associate with Russia, considering the type of violence-ridden underclasses they tend to create in countries that open their doors to them. Not to mention the extreme chutzpah and aggressive sense of racial grievance they tend to act out towards their host countries. So yes, I'm racist and very happy with that. If /r/europe SJWs or Islamists such as yourself have a problem with that, oh well. Don't care, really.[25]

Karlin has described himself as a homophobe and has quoted a study that he interprets as saying "homophobia is a natural part of the human condition."[30]

He has criticised Tommy Robinson for going on stage at an anti-Islam rally with a transexual.[31] 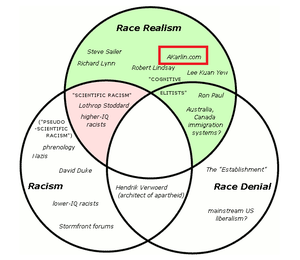 Karlin classifies himself as a "race realist" not a "low IQ racist" like Stormfront users, despite the fact he opposes non-white immigration and posts explicitly racist content online such as black people are violent with low IQ's - views typical of Nazis on Stormfront.

Karlin describes himself as a "liberal-conservative-neoreactionary" yet his race-based anti-immigration political views and racist beliefs are typical of white nationalist knuckle-draggers and boneheads from Stormfront. Despite this, he has tried to distance himself to the latter, at least cosmetically, for example describing Stormfront users as "low IQ racists",[32] while himself as a "liberal race realist".Do You Believe That? Throughout 2016, Karlin was supportive of the alt-right, for example he shared a podium with neo-Nazi Richard Spencer and delivered a speech at a "Safe Space for Europeans" demonstration at U.C. Berkeley:

Near the end of the evening, I was called up to the podium by Richard Spencer to give an impromptu speech. I went up and started rambling about my journey of discovery, my disillusionment, my “awakening”… LOL no I didn't, faggots. Your "Alt Right" is otherwise known as "common sense" in Eastern Europe – it's really quite funny how actually existing Marxism cocooned them from cultural Marxism.[33]

Karlin claims he agrees with the majority of alt-right ideology and views:

Karlin has tried to introduce the alt-right and HBD to far-right Russian nationalists, but by his own admission, failed.

My own modest aims are twofold. First, I want to help introduce the Alt Right to Russian nationalists, and vice versa. Second, I am trying to place Russian nationalism on a firmer, more scientific ideological footing, by importing useful concepts developed primarily in the West and applying them to Russian realities, such as IQ/HBD-realism.[35]

He has also claimed "Russia Insider has good relations with AltRight.com, and they reprint my articles semi-regularly (with my permission)." The main editor of the former, published a controversial article called "It's Time to Drop the Jew Taboo"[36] and Karlin controversially published a defence of the article, arguing it is "objectively true".[37] The article has been described as "a lengthy anti-Semitic manifesto"[38] and Karlin is openly anti-Semitic, scoring himself 7/11 on a scale of anti-Semitism writing: "I suppose I deserve my “accolades” from the SPLC and RationalWiki after all."[39]

In 2019 Karlin oddly began denying his former support for the alt-right and has disassociated himself with individuals like Richard Spencer, despite his core white nationalist political beliefs and racist internet posts remain the same. His change in attitude to the alt-right seems to be for two reasons, firstly from people Googling his name and coming across this article that discredits him as an alt-right or white nationalist weirdo, secondly, that he realised that the alt-right political goal of forming an ethno-state in the West is not achievable:

I think the Alt Right by and large realizes that none or almost none of their political goals are going to be accomplished due to ongoing demographic changes and the failure of Trumpism anyway (e.g. see the NPI's pessimistic 2018 outlook).[40]

Karlin supports eugenics and transhumanist technology which he promotes among white nationalists and the alt-right to increase the average life-expectancy of white people to "preserve white majorities in Europe", as well as increase their IQs:

Yes, I know, they are sort of dorky and even SJWish at times. But technology has ideological load, as Michael Anissimov put it (in an article I can’t find), and it just so happens that transhuman techs are perfectly in line with Alt Right, NRx, Identitarian, and even White Nationalist agendas.

Raising IQs via genetic editing will arrest the dysgenic trends increasingly affected all peoples on the planet. Degenerating into a global idiocracy serves absolutely no-one’s interest: Not of Europeans, nor Asians, nor Africans. Automation will (hopefully) redistribute resources from the NAM-pandering welfare systems of today to something more fair and equitable. It will also probably help even the gap between indigenous and immigrant fertility rates in Europe and the US. Radical life extension will help preserve White majorities in Europe. The reason that they are declining isn’t just a matter of birth rates, but also of death rates; Europeans are simply much older than your typical immigrant “youth.” Plummeting mortality and morbidity rates – apart from their general desirability – will from an ethnic perspective overwhelmingly benefit Whites and help Europeans maintain majorities in their historic homelands.[42]

Like white nationalists in general, Karlin is obsessed with increasing fertility rates across Europe and wants white women to have more babies. He has written "Hopefully 2019 will mark a final turnaround in the fertility collapse" in Russia.[43] This is despite the fact he has no children of his own and is probably an incel.

Karlin has made 1700 blog posts at The Unz Review since January 2015.[44] His blog section is called "The Russian Reaction" and he writes mostly about HBD and politics.

In January 2018, Karlin wrote a blog post on The Unz Review defending paedophile apologist Emil Kirkegaard, who Karlin maintains was quoted out of context by so-called SJWs.[45]

Karlin identifies as a hereditarian and "race realist". In his articles he promotes the pseudoscientific work of discredited individuals associated with the Mankind Quarterly such as Gerhard Meisenberg.[46] He lists his main influences as the controversial psychologist J. Philippe Rushton and Charles Murray, co-author of The Bell Curve.[47][48] One of his favourite books is Rushton's Race, Evolution, and Behavior

that he claims "is still, perhaps, the book about the validity of HBD theory... this book raised my confidence in the HBD view of reality from “likely” to “almost certain.”[49] The book however is widely regarded by psychologists and anthropologists to be racist pseudoscience.[50][51] Concerning race and intelligence, Karlin has posted "I went from considering it primarily but *not exclusively* cultural (already a very un-PC view, esp. in 2010) to around ~50%/50% racial/cultural."[52]