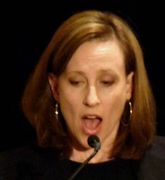 Joanne "Jo" Nova (real name Joanne Codling) is an Australian writer, speaker, former TV host, anti-science presenter and a professional wingnut.[1] She maintains a blog which regularly regurgitates debunked climate denial myths, making her the poor Aussie's Ian Plimer or Andrew Bolt.[2] The site also has on its header the highly ironic phrase "Tackling tribalist groupthink." She has also written a handbook called "The Skeptic's Handbook," a brief pamphlet that reads like it was copy-pasted from another denialist site without the slightest whiff of actual research and peppered with pretty pictures.[3] The handbook concentrates on a few of the greatest hits, including: Satellites and weather balloons showing no warming (they do); the Oregon Petition "debunking" the scientific consensus (it doesn't); carbon dioxide lagging, not leading temperature change (ignoring Milankovitch cycles and feedbacks); the carbon dioxide effect being saturated (it isn't); and bad weather station siting (relying on the self-debunked work of Anthony Watts).[4]

In between regurgitating debunked climate myths, she often posts nonsensical fiscal arguments; then breaks into a general bitching session about anything including the denial crowd pleaser, the Gore bash fest.

She downplays the funding she and other denialists receive from the Heartland Institute and the Science and Public Policy Institute.

This denialism-related article is a stub.
You can help RationalWiki by expanding it.
Retrieved from "https://rationalwiki.org/w/index.php?title=Joanne_Nova&oldid=2452262"
Categories:
Hidden categories: