From RationalWiki
(Redirected from Comets)
Jump to navigation Jump to search

Comets are a specific kind of minor Solar System body that shed gas and particles when they get close to the Sun. As a result, a comet gets enveloped with an expanding hazy cloud (called a coma) and grows a tail pointing away from the Sun, driven by the solar wind. This increases its brightness several times, as the coma and the tail are much larger and reflect sunlight better than the comet nucleus (core) — the actual solid body of the comet.

As comets are thought to be composed of rock, dust, and ice (not only water, but also methane, ammonia, and other compounds), they are sometimes called "dirty snowballs" in popular-science media, though this may be misleading. The exact composition probably varies from comet to comet and "snowy dirtballs" may be a better description.

Most comets never become bright enough to be visible to the naked eye.

Most comets move on orbits with a very high eccentricity — either a very elongated ellipse, or a parabola or hyperbola.

The string of Shoemaker-Levy fragments in May 1994. 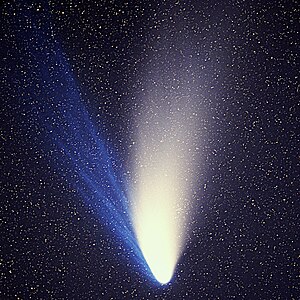 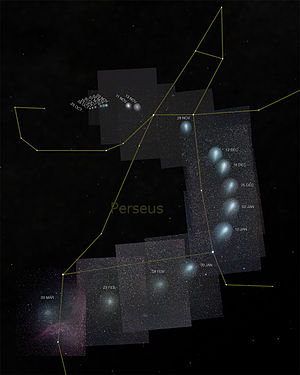 Young Earth creationists challenge Old Earth estimates of the age of the Solar System by arguing that as comets lose material when they approach the Sun, all comets must have disappeared by now if the Solar System was old.[1][2] This is partially true — comets do lose material and old comets have lost their volatile material and no longer produce a tail, but the number of comets that cross into the inner Solar System is constantly replenished from "stores" in the Kuiper Belt and the Oort Cloud at its edge. (This, of course, has prompted creationists to challenge the existence of these swarms.[3])

Nostradamus directly mentions a comet once in his Prophecies, in quatrain 2:62:

Expect this quote to be dug out every time a comet catches the attention of the conspiracy crowd. Nobody knows who "Mabus" is, though it is pretty sure it's not Dennis Markuze.

Halley's Comet (formally 1P/Halley) is probably the most well-known comet, as it is the only one visible with the naked eye that appears with some regularity. Its orbital period — about 76 years — is short enough to allow people to see it twice in their lifetime. There are records of its appearances since the third century BCE. During the spectacularly close approach in 1910, the Earth passed through its tail, sparking an end-of-the-world scare, as spectroscopy was applied for the first time to a comet and found cyanogen, a poisonous gas, in the tail. Some entrepreneurs took advantage of the situation and started selling "comet pills" and other comet counter-measures.[4]

Comet D/1993 F2 (Shoemaker-Levy) broke up and collided with Jupiter in July 1994, leaving several spectacular "bruises" on its cloud layers. This was widely reported and raised some awareness about the possibility of a comet impacting Earth and may have been the inspiration for the Deep Impact/Armageddon movie pair a few years later.

Comet C/1995 O1 (Hale–Bopp) was a bright, spectacular comet that reached perihelion in 1997 and was widely observed around the world. It is notoriously connected to the Heaven's Gate UFO cult suicides. Two years earlier, Nancy Lieder claimed that the comet was a hoax to distract the attention from the incoming Planet X.[5]

An otherwise unremarkable comet that for some reason attracted the attention of the Planet X/Nibiru/2012 apocalypse crowd. After generating several terabytes of bullshit on conspiracy websites and YouTube videos, it made a lot of people look dumb even dumber when it didn't survive its close approach to the Sun. Rest in Pieces, you little comet!

Discovered in 2012, this comet attracted the attention of doom-mongers with the possibility that it might become extremely bright. (According to some scientific predictions, at one point as bright as the full Moon, if it survived perihelion.[6] This ultimately didn't happen, but as we know, comets are notoriously fickle.) Its perihelion was in November 2013, and people like James McCanney began piling on nice and early[7] and it looked like there would be a repeat of the Elenin hysteria. ISON mostly broke up at perihelion, and though a tiny remnant dragged on a bit longer, it eventually faded out.[8]

A run-of-the-mill comet of special interest just because it has been the destination of the European Rosetta mission, composed of an orbiter (Rosetta) and a lander (Philae) that landed on it in November 2014 (the first man made object that has landed on a comet). The mission was ended in September 2016, crashing Rosetta into the bone-shaped comet (no woo so far on this one).