From RationalWiki
(Redirected from Geomagnetic reversal)
Jump to: navigation, search

Relatedly, geomagnetic reversals are shifts in Earth's magnetic field in which the positions of the magnetic north (positive) and south (negative) are switched.[2][3] In modern times, a reversal has usually occurred every 50,000 to 800,000 years, with an average of 200,000 years.[2][4] A plethora of scientific evidence supports the existence of geomagnetic reversals.

Geomagnetism and geomagnetic reversals are supported by several threads of evidence.

During the 1950s-70s, scientists learned that the ocean seafloor is patterned by stripes of magnetism, with alternating sections magnetized north, south, north, etc.[3][5][6][7][8][note 1]

This occurs because magma contains iron grains (specifically magnetite[3]) that orient themselves towards the magnetic north pole, much like a compass. When lava solidifies, the iron grains are no longer able to move freely, and are permanently aligned along the direction of existing magnetic fields. Thus, when magma from oceanic trenches hardens into seafloor, it will maintain its magnetic alignment.[3][5][6][8] Because stripes of the same number of magnetic reversals away from oceanic trenches are uniform in age, it is clear that this is a global event, which can only be explained by something like a geomagnetic reversal.

The theory of seafloor spreading is supported by the existence of symmetrical (in age, polarity, and distance from mid-ocean trenches) magnetic stripes in the rock of the ocean floor.[6][7][8] No other theory can explain why these stripes exist at all or their symmetry, making this strong evidence for seafloor spreading. This, in turn, supports the existence of geomagnetic reversals.

If the Earth's magnetic field was freely decaying (nothing added to its strength, so it slowly died) then it would decay in about 20,000 years.[9] Since we know that the magnetic field has existed for at least 3,000,000,000 years, a theory is needed to explain how the Earth's field regenerates that also can explain the existence of geomagnetic reversals, local fluctuations in the geomagnetic field, and various other magnetic phenomena.

One model of the geodynamo theory, the Glatzmaier-Roberts model, was simulated for more than 300,000 (simulated) years.[9] The simulated field matched the observed field well. Notably:

This model's simulation also has an explanation for why the geomagnetic field reverses in wildly varying intervals. As Glatzmaier states:[9]

Our solution shows how convection in the fluid outer core is continually trying to reverse the field but that the solid inner core inhibits magnetic reversals because the field in the inner core can only change on the much longer time scale of diffusion. Only once in many attempts is a reversal successful, which is probably the reason why the times between reversals of the Earth's field are long and randomly distributed.

While geodynamo theory is not yet perfect, it very accurately describes the Earth's magnetic field and has no real competitors.

Because the strength of the geomagnetic field is currently declining, it has become the center of some woo.[4] It is believed that a reversal or excursion (basically a reversal, with associated decrease of strength, minus the polar flip) may be imminent in the next couple of thousand of years or so.[2][4][5][6]

Reversals do have an impact. For example, during the most recent reversal, the Earth's magnetic field reduced to 5% of its original strength.[10] A small amount of Earth's atmosphere, usually protected by the Earth's geomagnetic field, can be lost to space due to radioactive bombardment from the sun.[11]

On the whole, however, reversals appear to be relatively harmless to living beings.[2] Considering that around 170[5] to 171[8] reversals are documented in the last 76 million years alone[8], reversals don't seem to pose much of an extinction-level threat.

Some cranks, including Robert W. Felix, believe that geomagnetic reversals cause ice ages[12] and extinctions that lead to "evolutionary leaps".[13] While both are possible, both are rather unlikely. As pointed out above, geomagnetic reversals don't seem to have impacted life on Earth much in the past 76 million years.

See the main article on this topic: Pole shift

In "Impact theory", it has been proposed that very large meteor impacts may cause or may contribute to geomagnetic reversals,[14] because:

This theory has essentially no scientific consensus, but is pretty badass.

See the main article on this topic: Evidence against a recent creation

The frequency at which reversals occur varies greatly, but they usually happen once every 50,000 to 800,000 years, and generally take thousands of years.[2][4] This fact is obviously inconsistent with the notion of a young Earth. There's further evidence against a recent creation. As Scientists Confront Creationism notes:[8]

And, beyond that, around 171 reversals are geologically documented, which would make the Earth at least 8.5 million years old.[8] 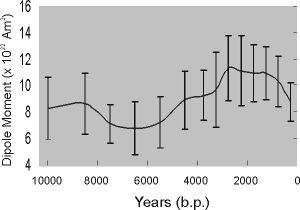 Estimated dipole moment (basically, the strength of the magnetic field between the two poles) of the Earth from 10000 years before present. Source 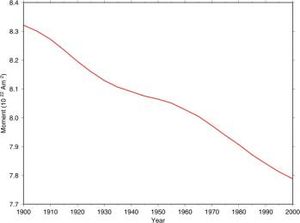 From 1900 to 2000. Even excluding the above graph, this looks less like exponential decay and lot more like linear decay. Source

Some young earth creationists, such as Walt Brown,[7] Thomas Barnes,[15][16][17][18] Kent Hovind,[17][19] , the ICR,[20] and CMI's 101 evidences for a young age of the Earth and the universe (numbers 49, 69, 70, 71, and 81) argue that the geomagnetic field has only (or with slight variation in speed) decayed for the past 6-10,000 years; geomagnetic reversals would contradict this worldview. Depending on the level of denialism, many creationists either deny that the data exists or consider them to be past fluctuations in the overall high strength of the geomagnetic field.[7]

This assertion has numerous problems.

First, this idea assumes that current decay rates of the Earth's magnetic field have remained constant and exponential for all time, which can be seen in the lower image on the right. Evidence contradicts this assumption. As shown in the upper image on the right, the geomagnetic field frequently both increases and decreases in strength, with no clear trend either way, which directly contradicts the predictions of this model.[16] Further, as shown earlier, during geomagnetic reversals and excursions, the strength of the field significantly decreases;[2][4][5][6] during the most recent reversal, the Earth's magnetic field reduced to 5% of its original strength.[10] The Earth's geomagnetic field is believed to be currently undergoing a reversal or an excursion, which would account for the decrease of the strength of the field.[2][4][5][6] This means that the decay rate cannot be assumed to be, in fact, constant, and thus the proposed timeframe of this model cannot be accepted.

Second, this model relies on an obsolete model of the Earth's geomagnetism. In order for it to make sense, it must assume that the source of geomagnetism is a free electrical current in the Earth's molten center. (If we accept this, then 20,000 years is the time in which the Earth's magnetic field would have decayed away.[9]) This model has no way to explain any increase of the strength of the geomagnetic field, let alone both increases and decreases,[16] while the currently accepted dynamo theory can.[16] This outdated idea has numerous similar problems. Brent Dalrymple puts it:[21]

The dynamo theory has gained near-universal acceptance because it is the only proposed mechanism that can explain all the observed features of the Earth's magnetic field. In contrast, Barnes' hypothesis of a freely decaying field cannot explain the existence, configuration, movement, or changes in the nondipole field, the fluctuations in the dipole moment, the reversals in field polarity, or the documentation in the geologic record of the continued existence of the field for more than three billion years.

In short: the idea is so terrible that fellow Young-Earth Creationist Russel Humphreys presents arguments against a pure free-decay model.[22]

Thomas Barnes also advanced the claim that, instead of global geomagnetic reversals, which require a long time and repudiate a YEC model of the Universe, the reversals that we see were actually local geomagnetic variations, which can occur quite quickly and allow room for a YEC universe.[15]

Evidence flatly contradicts this claim. The ages of magnetic stripes on both sides of the Atlantic Ocean[5][7][8][23] and all over the world[8][23] match. This would only occur if all of these locations had experienced the same magnetic field at the same time, which would be incredibly unlikely if magnetic reversals did not occur on a global scale. This indicates that reversals are not local fluctuations, but global events.

Modern YECs, such as Russell Humphreys[15] and CMI (101 Evidences, numbers 46 and 47) generally accept that geomagnetic reversals exist and have occurred.

Humphreys realizes that reversals, with their long (1000+ year) time duration, contradict a YEC model. Specifically, Humphreys notes that about 50 reversals are recorded in layers containing fossils, which creationists think were caused in 1 year by the global flood, which means that a rate of 1 reversal per week is necessary for a YEC model to work. Humphreys then works out a totally unassailable model for how this could have happened. Its key points are as follows:

… And that's it. Until science is willing to accept "And then a miracles happens" as a plausible explanation for something, this theory is pretty much worthless.