Fun:Types of people who go to Hell 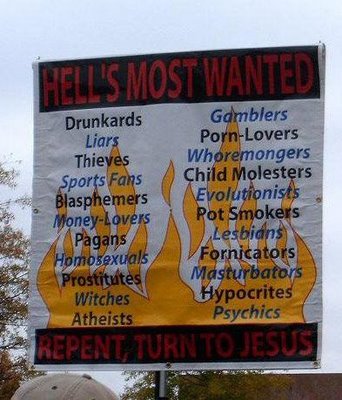 Okay, thieves and child molesters are givens, yes, but why were rational thinkers left off? Aren't lesbians homosexuals too or did you just want to be doubly sure? And why are sports fans on there? Did God say, "Thou shalt not watch the Super Bowl"? And how exactly does one 'monger' a whore? Y'know what, let's just say the sign is messed up and leave it at that. 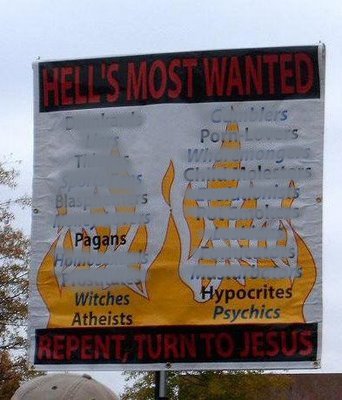 The same list after the Gospel is factored in.

Nobody can really make up their mind what happens in hell. Some say that their extremely benevolent and kind God condemns you to eternal torture; others say that it is absence from the presence of God; while yet others say that sod all happens in Hell due to its not actually existing.

Types of people who go to Hell[edit]

Again, nobody can make their minds up. Most fundamentalists say that hell is reserved for amoral people. They can narrow this down into a few specific types of people: 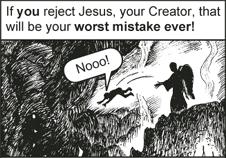 An angel throwing out the trash.
Detail from a Jack Chick tract.[1]

Who goes to hell part two[edit]

Who goes to hell part three[edit]

I forget what he did, but it's not as much fun as it looks.

Can you guess which one is the barrator?

This might be fun for a while, but after like a million years or so it gets really uncomfortable.

According to Dante (with special thanks to Gustave Doré's illustrations) the layers of Hell are (heading downwards) populated by : [3]

And in the last (lowest) circle we find

Dante missed the future abode of

Who WON'T go to hell[edit]

Since its been pretty well established that just about everyone, their brother, their 2nd cousin, and their pet dog is destined to burn for all eternity (or freeze for all eternity, or... whatever the fundamentalists decide what happens in hell.) We thought it'd just be easier to list who isn't destined to an eternity of... whatever.