From RationalWiki
(Redirected from Hardline)
Jump to navigation Jump to search

I'll just have some 'erbal tea, thanks.

In addition to being a tool for doing engineering and architecture designs and what not, straight edge is also a subculture within the hardcore punk music scene, defined by its adherents' refusal to use drugs including alcohol. Abstinence from nicotine is also a prerequisite for "claiming edge" according to all but the loosest definitions. Those straight edgers who end up partaking of drugs and/or alcohol anyways are referred to as having "broken edge".[notes 1]

Minor Threat in 1981: Ian MacKaye is the baldy.

The movement started in the early 1980s as a reaction against the drug and alcohol use prevalent in the punk scene, often by people who had turned to punk in the first place as a reaction against the drug and alcohol use prevalent among their Van Halen-addled high school peers and were not at all pleased to find the same self-destructive behaviors in the punk scene. The name comes from the 1981 song "Straight Edge" by the Washington, D.C.-based hardcore band Minor Threat, which denounces drug use. It inevitably produced a backlash in the form of the "bent edge" or "curved edge" scene, which saw straight edgers as rigid and intolerant and openly embraced the "sex, drugs, and rock 'n' roll" lifestyle. Ian MacKaye, the frontman of Minor Threat and essentially the founding father of straight edge, remarked that his learning about bent edge was the moment that he realized that straight edge had become a movement.[2]

Straight edge took off nationally in the mid-late '80s on the back of the "youth crew" movement, a New York- and California-based hardcore punk scene characterized by optimism and moralism that embraced straight edge. In the '90s, veganism, animal rights, and social justice also emerged as pillars of large swaths of the straight edge movement, while others also added sexual abstinence and the avoidance of coffee and prescription drugs to the list of requirements. The movement is no longer as big as it was in the '90s, but it continues to chug along with a diehard core of followers, experiencing periodic waves of revival and decline in the underground punk scene. 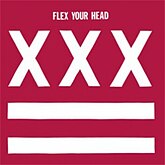 The cover of a sampler album that included straight edge, and other hardcore bands

The letter X became a symbol of straight edge. The origin of this was clubs which marked the hands of those who were underage with the letter X, indicating they were too young to be served alcohol. The tradition started in 1980, when the Washington, D.C.-based band The Teen Idles did a tour on the West Coast only to find themselves barred from entering the Mabuhay Gardens in San Francisco due to all the band's members being under 21; as a compromise, the club management marked their hands with X's, an idea that Ian MacKaye (then a member of the band) brought back to the East Coast. Straight edgers began showing up at clubs with the letter X already on their hands, indicating that they too didn't want any alcohol. A variant on this is sXe (se for straight edge), which does not mean "sexy". Another variant is XXX, which is, ironically, also a well-known symbol of pornography and alcohol (especially moonshine).

Starting in the '90s, there were notable instances of straight edgers taking it upon themselves to take "direct action" against drugs, alcohol, and other social ills within the punk scene, to the point where law enforcement in a number of cities came to treat straight edge as a gang.[3] The FSUs (for "Friends Stand United" or, alternatively, "Fuck Shit Up") emerged in the late '80s as a group dedicated to driving neo-Nazis and drug dealers out of Boston's punk scene, before falling victim to Godwin's Law and declaring that those categories included everybody they didn't like; unsurprisingly, some of their members wound up in the Outlaws and Mongols motorcycle gangs.[4][5] Salt Lake City was also a hotbed of the militant wing, where it became a gateway to ecoterrorism as some straight edgers expressed avowed support for groups like the Animal Liberation Front and the Earth Liberation Front.[6] Somebody with a sense of irony might see it as the anti-drug message of D.A.R.E. taken to its logical conclusion, with even the police and parents' groups who had been pushing it horrified at what emerged from it. Oddly, straight edgers are probably the only youth in Utah (Mormons included) who actually follow the Mormon "word of wisdom" concerning alcohol, tobacco, and coffee. You can't win, I guess.[3][6]

There also exists a subset of neo-Nazis (mainly in Russia, eastern Europe, and Germany) who have latched onto straight edge, viewing "racial purity" as another component of "clean living" and a healthy, drug-free body as important for fighting the race war. In Slavic countries (Russia, Ukraine, Belarus, and Serbia especially), they have been involved in attacks against Roma camps and LGBT people. Many have also embraced pan-Slavism, albeit a brand of such distinct from that promoted by the Russian government, especially in Ukraine, where such groups are often fervently anti-Russian due to the war in the Donbass.[7] Needless to say, unlike many other straight edgers, they staunchly reject any identification with the left, the only left-wing ideas they'll associate with being of the third positionist sort.[8]

Not to be confused with the Danish far-right party Stram Kurs, whose name translates in English to "Hard Line".

Hardline was a particularly strange offshoot of the vegan branch of straight edge, which tacked on all of the following simultaneously: hard green biocentric views, animal rights, pacifism, a consistent life ethic, and opposition to abortion, homosexuality, cigarette smoking, and any sexual intercourse outside of marriage. Some of them also opposed masturbation, pornography, and Western medicine, shunned chocolate, coffee, sugar, and tropical fruits due to both opposition to Third World agricultural labor practices and (in the case of chocolate and coffee) their caffeine content,[notes 2] and expressed their across-the-board militancy on everything by wearing camouflage clothing. Hardline claimed both an Abrahamic foundation and syncretic influences from Eastern spiritual disciplines, such as Zen Buddhism and Taoism. In effect, hardline synthesized the left-wing social justice politics, environmentalism, and "clean living" mainfesto of "mainline" vegan straight edge with a religious right sexual morality and forays into deep ecology as part of a broader appeal to nature. Some of them took direct action against people they saw drinking, smoking, eating meat, or using drugs at hardcore shows, feeding into negative stereotypes of straight edgers.[6][9]

Hardline had its origins with Sean Muttaqi[10], the frontman of a hardcore punk band called Vegan Reich[notes 3] — a name that pretty much sums it up. Vegan Reich were occasionally suspected of being a parody of straight edge along the lines of Crucial Youth[11], but they were quite serious, and were in fact espousing views more extreme than Crucial Youth in their heyday.[12] In the 1990s, Tennessee (particularly Memphis) and Massachusetts became the centers of gravity for hardline, the former mainly due to the influence of the Tennessee-based hardline band Raid, and in 1994 Muttaqi founded the record label Uprising Records to support hardline bands.

Muttaqi eventually converted to Sufism after years of interest in the Islamic faith, causing him to leave the movement while leaving his 'zine Vanguard (the main outlet promoting hardline) in the hands of his followers. Soon after, the movement fell into a purity spiral familiar to any observer of radical politics, and began to spurn the hardcore punk and straight edge scenes for being insufficiently activist. An attempt by a hardline group to establish a commune in Hawaii fell apart when they got into a dispute over whether or not cooking food was in line with the natural order. The movement's growing radicalization culminated in the formation of the "Hardline Central Committee" in 1998 to enforce ideological purity — a move that backfired when those who rejected its more extreme tenets realized that the movement had gone full-blown totalitarian and turned into a political cult, and abandoned hardline altogether for vegan straight edge and other, more moderate environmental and progressive activist movements. This left only a tiny core of hardliners (pun very much intended) who faded into irrelevance soon after; the Central Committee only lasted a year before it decided to vote itself out of existence.

In short, they were pretty much an unintentional parody of contemporary moral guardians and cultural critics on both ends of the spectrum, albeit born from the counterculture rather than railing against it from the outside. Perhaps it's no surprise, then, that many of the leaders of the hardline movement eventually left the hardcore punk scene. Most other straight edgers considered "hardline" to be a huge embarrassment.

In the mid-'80s, Larry Pugliese, a member of the International Society for Krishna Consciousness, sponsored a number of concerts in New York aimed at the city's punks and skinheads. As a result, the Hare Krishnas made inroads into the New York straight edge scene (albeit remaining very much a minority), producing an offshoot known as Krishnacore that eventually spread into the broader straight edge culture. (And you thought Christian rock could get insufferable...)[13]

Speaking of, a Christian straight edge scene unsurprisingly emerged alongside the secular one. While many leading lights in the straight edge movement held organized religion in disdain (it's the "opiate of the masses", after all), the straight edge ethos concerning drugs, alcohol, and premarital sex meshed well with Christian morality, albeit rooted in a secular basis. As such, straight edge provided an outlet for many Christian teens in the '80s and '90s to take part in the punk counterculture and rebel against their parents' aesthetic tastes while still upholding their moral values. Straight edge has also become popular among Muslim youth in the US and Europe in the 2000s and '10s for similar reasons, as a way to engage in the counterculture and challenge both Islamophobia and the conservatism of their fellow Muslims without compromising religious morality. This Islamic offshoot of straight edge is known as "taqwacore" (taqwa being the Arabic term for piety).[14]