From RationalWiki
(Redirected from Know Nothing Party)
Jump to: navigation, search 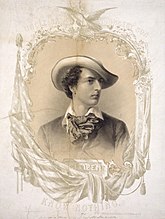 Now-forgotten, Citizen Know Nothing was an icon of the party.

The Know Nothing movement knew nothing about their own movement was an American nativist movement of the mid-19th century. It spawned the American Party, which became commonly known as the "Know Nothing Party." They were essentially the party for the xenophobic wingnuts of yesteryear — or (in anachronistic terms), essentially the pre-civil war incarnation of the Tea Party.[1]

Origin of the name[edit]

The party went under various banners, originating in New York as the American Republican Party in 1843 and went by the name Native American Party in several states, shorting out irony meters everywhere. When the various parties conglomerated into a national party in 1855, they went by the name of the American Party. The term "Know Nothing" came from the fact that the parties were organized as secret societies and members were told, if asked about their involvement, to reply, "I know nothing!". "I know nothing but my country" was another slogan attributed to the movement. It's also a fitting name, considering their attitudes toward immigrants and people of different faiths.

The movement grew out of opposition to increasing German and Irish immigration. As these immigrant groups happened to be largely Roman Catholic, the Know Nothings were known for their virulently anti-Catholic sentiment. This involved numerous conspiracy theories about Catholics being part of a massive hive mind controlled by the Pope. Sound familiar? They believed local bishops to be secretly leading a Catholic insurrection to put the US under papal authority. Due to their persecution complex, they sought to ban non-Protestants from holding political office.

The party failed to gain any traction over an extended period. It found success in state legislatures, including a brief takeover of the Massachusetts legislature, and ran Millard Fillmore as its candidate in 1856, who failed in his re-election bid. The party gained populist support due to its anti-immigration stance, pro-temperance stance, as well as some reforms it supported, such as railroad safety regulations. However, it fizzled out much like the Whigs due to the split over the issue of slavery. It disappeared from the American political landscape when the Civil War rolled around.

The Know Nothing party's politicized anti-Catholic sentiment can still be found among some fundamentalist wingnuts today. For example, the Catholic Church is often depicted as a tool of Satan in the works of Jack Chick. Enduring anti-Catholic sentiment presented a significant challenge for many Catholic political candidates, notably helping to derail the then-Governor of New York Al Smith's presidential run in 1928 against Herbert Hoover. John F. Kennedy faced a great deal of anti-Catholic opposition during his campaign and presidency.

The term "Know Nothing" or "Know-nothingism" is still used in political commentary today as a synonym for nativist or anti-immigrant sentiments. The Tea Party movement has been described as a modern incarnation of the Know Nothings by analysts and commentators.[1] They are also known today as one of the many examples of political organizations that totally ruined an opportunity for a great band name.

Originally copied from a hand-written note, the Know Nothing platform of 1856 read as follows:[2]