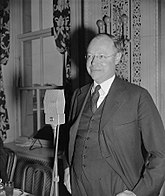 Robert Alphonso Taft Sr. (1889–1953) was an extremely powerful United States Senator from the end of the Great Depression up until the beginning of the Eisenhower years. Basically, the leading member of the conservative faction of the Republican Party, his views would best be described as libertarian, and many paleoconservatives, paleolibertarians, and other libertarians cite him as an influence. Despite the fact that his nickname was "Mr. Republican", many of his views are different from those of the modern GOP, mainly because he was a sincere small government conservative and wasn't a religious zealot.

Just to make things perfectly clear, because the Taft dynasty

abounds in U.S. political history:[note 1] The Robert Taft in question was the son of President William H. Taft. His son, Robert Taft Jr., was later a Congressman and also Senator, and his grandson Robert "Bob" Taft III was Governor of Ohio.

sympathizer,[1] as "socialistic" and excoriated him as "the worst administrator who ever lived."[2]

Taft was elected to Ohio's Class III Senate seat in 1938, and led the "Conservative coalition

," which was a coalition of conservative Republicans and conservative Democrats who opposed Franklin D. Roosevelt's New Deal, with both cliques raving about it being "creeping socialism." However, he had a history of getting in spats with racists prior to being elected Senator, such as when he denounced the Ku Klux Klan and opposed their bills to outlaw dancing on Sundays and force Bible verses down the throats of schoolchildren while he served in the Ohio House of Representatives.[3] He broke from the Southern Democrats in his support for civil rights, supporting anti-lynching legislation and desegregation efforts.[citation needed] However, Taft was also hilariously moderate on some domestic policies (by current libertarian standards), supporting Social Security and public housing programs after he looked at them, thought about them, and decided they were the least bad option.

Taft is probably best known for being a non-interventionist, opposing most American policies that were aimed at aiding the Allies against the Nazis prior to the bombing of Pearl Harbor. After the bombing, however, he supported American intervention in World War II. However, despite taking a more aggressive stance towards the Axis after Pearl Harbor, Taft remained one of the very, very few politicians sane enough, along with like-minded Colorado governor Ralph Lawrence Carr

Taft also, in a controversial move, condemned the Nuremberg Trials as basically being a kangaroo court, which was more politicized than he believed it should have been.[5][note 2] Some tried (and try) to pass Taft off as a Nazi sympathizer due to his non-interventionist policies and critiques of the Nuremberg trials, which isn't correct since Taft despised Adolf Hitler and the Nazis, supporting a strong Navy to keep them out in case they overran Europe. Even his controversial foreign policy was more toned down than the modern isolationism "championed" by Ron Paul, with Taft strongly supporting the League of Nations in his early years and some sort of international court of law.

Taft also pushed through the 1947 Taft–Hartley Labor Act, which was an anti-union bill that is most well known for outlawing closed shops. Policymakers point to the bill as the main reason why union power has slowly declined since the 1950s. Guess he was willing to use government when it came to unions, eh?