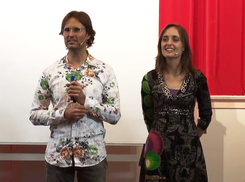 Alan John 'AJ' Miller is an Australian Christian spiritual leader who has claimed to be the resurrected Jesus Christ[1].

He is the leader of Divine Truth, a Christian organisation based in Kingaroy, Queensland, which he founded in 2007. He currently has around 40 followers, and is accompanied by his wife who is convinced that she is Mary Magdalene. She had never regarded herself as such prior to meeting Miller.

Miller has claimed to be the resurrected Jesus, and can remember 'everything' that has occurred over the past 2000 years. Despite this claim, he claims to be unable to speak Aramaic, the language spoken by Jesus.

Miller has also claimed to have met many prominent historical figures during the afterlife, including Plato, Socrates and Aristotle.

Like many good cult leaders, Miller has made numerous 'prophecies' that have turned out to be false[2].

In 2012, he claimed that tsunamis as high as 100 metres would devastate the coasts of Australia. He also encouraged his followers to see the film '2012', as he claimed the events of the film regarding the end of the world would literally eventuate.