From RationalWiki
(Redirected from Johnny Appleseed)
Jump to: navigation, search 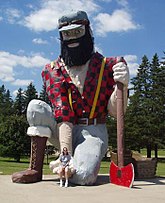 Paul Bunyan about to eat a young woman

American tall tales are a genre of folklore from North America and particularly the frontier during western expansion of the USA. They vary from stories about legendary or fictional individuals to takes of monsters and hazards. Some are based loosely on real people or events while others appear to have been created out of whole cloth: some are the creation of individual authors while others just appeared somewhere unknown, first told as campfire tales or oral legends. As the tales became popular, some writers created fakelore, original stories that resembled older tall tales.[1]

The tales typically relate to the westward growth of the USA, covering topics from war and exploration to railroad engineering and farming. Many involve superhuman feats of strength or endurance. Many offer simplistic or whitewashed accounts of American history and controversial events such as the Native American Genocide and Texas Revolution, offering a pseudohistory of the American west where white people are heroes and conquer the land through their bravery, skill, and extraordinary deeds. There is overlap with other 19th century fictions and legends, such as the stories of Washington Irving

, and with the myth of the wild west, which involves fictionalised versions of historical figures like Billy the Kid and Wyatt Earp. Some are important in other ways, such as John Henry, who provided an early African American role model (even though his historicity is disputed), or working class and immigrant heroes like east European steelworker Joe Magarac. 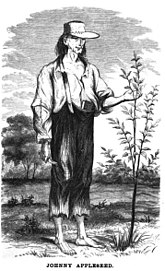 Johnny Appleseed, who travelled through America planting apples wherever he went, was based on a real figure, John Chapman (1774-1845), a Swedenborgian missionary and promoter of the merits of apples. The real Johnny Appleseed introduced apple trees to much of the Midwest, and from that comes a legend about a stranger planting apples.

He is often pictured as "a barefoot wanderer in tattered clothing, armed with a sack of apples and a tin pot for a hat", something of a vagrant, almost an outlaw.[2] However while popular tradition has him as a simple, almost foolish figure, wandering around planting apples wherever he went, in reality he had a shrewd business venture going: if you planted a certain number of trees on an area of frontier land, then assuming it didn't belong to any other white person, you could claim it. As a result, Chapman was able to set up a number of orchards and sell them to settlers; he died in 1845 owning 1200 acres of land.[3] Therefore he was firmly a part of the system of manifest destiny expanding the US westward.

Another more pleasant aspect of truth vs myth is that contrary to the impression you might have, he wasn't planting apples for eating, but apples for making the alcoholic drink of hard cider. Sadly many of his trees were chopped down in the Prohibition era to prevent them being turned into sweet sweet hooch.[3][2]

A legendary giant lumberjack, who seems to have originated in folk stories. Some of the tales were put together by the author William B. Laughead in 1916, although the earliest published account is said to be by James MacGillivray in "The Round River Drive" in Detroit News-Tribune, July 24, 1910.[4] A French-Canadian origin is suggested (perhaps "bon Jean"). According to legend Bunyan was beaten to death with a fish by a Native American for chopping down too many trees. Various sites claim to have his grave: it is said to be in Kelliher, Minnesota, which gives his dates as 1794 to 1893. Others claim he is buried at Rib Mountain, Wassau, Minnesota.[5][6]

The stories of his exploits involved a whole cast of figures including Babe the blue ox (whom Bunyan rescued from the snow where he was so cold he went blue), Cordwood Pete (his younger brother), and Sport the Reversible Dog (Paul Bunyan inadvertently cut Sport in half with an ax and tried to sew him back together but accidentally he was stitched with his hindlegs pointing upwards and forelegs downwards). There are a lot of statues of Paul and Babe around the Midwest and western states. Tales involve various superhuman endeavors, hard tasks, bad weather, Bunyan's enormous size and appetite even as a child, etc; for instance, one tale says he was trying to move logs along a twisty road, so he tied one end of the road to a tree and the other to Babe, and Babe pulled the road until it was straight.[7] Most of these are harmless tales of bravery and strength, with a similar delight in twisting physics to that found in old Warner Brothers cartoons. But they do reflect an idea of conquering and subduing the land through physical force, the same idea as found in Western films and stories.[8]

While most sources suggest Bunyan was purely fictional, there are claims he was based on a real person. One candidate is Fabian "Joe" Fournier, a logger from Quebec who moved to the US Midwest and was killed in 1875 in a brawl.[9] But the stories are so obviously untrue, the hunt for a real Bunyan is futile.

John Henry was an African American railroad worker, known for his enormous workrate. The chief legend describes his contest against a steam hammer drilling holes to plant explosives and tunnel through a hill, which Henry won but died afterwards; the historical basis for this isn't clear and multiple sites claim to be the true location of his tunneling feat. Historian Scott Reynolds Nelson suggests it was through the Allegheny Mountains for the Chesapeake & Ohio Railway.[10][11]

A legendary cowboy, with his horse Widow-Maker (or Lightning) and sweetheart Slue-Foot Sue. He was supposedly raised by coyotes and performed feats such as lassoing a twister and shooting stars out of the sky. Edward O'Reilly appears to have created Pecos Bill in newspaper stories published from 1917; they were collected as Saga of Pecos Bill (1923).[12][13]

A cowboy who goes to sea, apparently an original invention of author Jeremiah Digges in Bowleg Bill, The Sea-Going Cowboy (1938) done in the style of earlier American folklore.[14] The story has later been retold by Harold Felton, and others.[15]

Washington Irving's 1820 short story, "The Legend of Sleepy Hollow", set in the eastern US near Tarrytown, New York, has become part of American folklore (with numerous adaptations into other media) and is sometimes included in tall tales anthologies. Its story about a ghostly horseman and midnight ride is probably influenced by earlier works such as Robert Burns's "Tam O'Shanter" (1790) and Gottfried August Bürger's "The Wild Huntsman" (1796), but not by actual events.[16] Irving actually made up the legend and town of Sleepy Hollow - you can visit Sleepy Hollow today but it has only existed as a town in New York state since 1996, when North Tarrytown changed its name to Sleepy Hollow for the tourist dollars.[17]

James "Jim" Bowie was a historical figure involved in the Texas War of Independence, dying at the Battle of the Alamo in 1836. After his death, various romantic tales of his deeds sprung up, beginning with his brother John Jones Bowie's memoir "Early Life in the Southwest—The Bowies", published in DeBow's Review in October 1852. The 1946 novel Tempered Blade was adapted into a CBS TV series The Adventures of Jim Bowie in 1956-58.[18] Many legends have appeared about him. In one, he owned a silver mine in Texas but with his death the secret was lost (there are no silver mines in Texas).[19] This seems to fall into the subgenre of prospectors' campfire tales of imaginary wealth (see e.g. Mount Shasta).

Davy Crockett, King of the Wild Frontier, was in real life a successful politician who sat for Tennessee in the US House of Representatives as well as a soldier who died at the Alamo, but even in his lifetime he was the subject of tales of frontier heroism and derring-do, which doubtless did his political career no harm. Later there was a Disney show Davy Crockett (1954-55) and a lot of books and films.[20] MythBusters investigated some of the claims about him, finding that it was possible for him to shoot a bullet at an ax from a distance of 40 yards and split the bullet on the ax blade.[21][22] There is also a legend that he wasn't killed at the Alamo but was captured and later executed; there doesn't seem to be much evidence for this, and it doesn't really make much difference.[23][24]

The classic American tall tale can be compared with many other types of folklore. 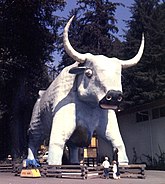 Some seem to have arisen as the original creations of writers:

Others were taken from traditional tales or folklore but popularised by fictional works, often anthologies: