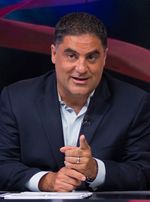 The big Cenk himself.

Beginning as a radio program hosted by Uygur in 2002, TYT jumped to CurrentTV and covered the 2012 presidential election. Among the more notable moments was an interview with Andrew Breitbart mere days before he died, and breaking the news on Michael Hastings' death in 2013. CurrentTV was shut down and sold to Al Jazeera,[1] but TYT is still video broadcast exclusively on YouTube.[2]

TYT was the first daily streaming online talk show, having begun in 2006.[3] Since then, they've added a number of YouTube shows to their "TYT Network", including Aggressive Progressives, TYT Politics, TYT Sports, ThinkTank, The Jimmy Dore Show, Kyle Kulinski, and others.[4] TYT remains their flagship show, and as of 2017, it's also audio broadcast on SiriusXM radio.[5]

It's pretty impressive; no web "news" company can compare to what they've done. But not everyone's impressed; Uygur's bombastic personality has inspired a legion of (largely conservative-friendly) detractors and critics, like Sargon of Akkad, who dismisses the show as inhabiting the "progressive echo chamber",[6] and The Daily Caller, which spread rumors that Uygur's Wolf PAC was a moneymaking scam.[7] Even liberal New Atheists like Jerry Coyne and Sam Harris have clashed with TYT over what they feel is the show's "smug and arrogant form of regressive Leftism".[8] TYT's loud, in-your-face style has prompted some to disparage them as a mirror image of far right conservative political outlets.[9][10]

The Young Turks are arch-left by American standards:

TYT stories run the gamut, from Michael Moore-esque humor[21] to a center-left version of Truthout,[22] but always with a progressive slant. Topics that Uygur and company take on, in no particular order:

TYT's coverage of news occurring outside the US has tended to be haphazard, such as in 2014 when they mistakenly referred to British Youth BNP leader Jack Renshaw as a "conservative",[24] confusing the far right for the center-right. More recently, their Brexit news coverage has been better received,[25] although critics still see foreign affairs as TYT's weak point.

During a remote broadcast from the 2016 Republican National Convention, Alex Jones and Roger Stone famously crashed the TYT set waving a T-shirt emblazoned with a Shepard Fairey-style

parody image of Bill Clinton and the slogan "Rape," igniting an aggressive shoving match, the video of which went semi-viral.[26] At the height of the shoving, yelling, slap-fest, Jimmy Dore can be observed spitting water at Jones, and Ana Kasparian can be heard to shout "get off the stage you fat fuck!". Hordes of users online quickly criticized Kasparian, labeling her outburst as fat shaming and hypocritical,[27][28] and the story enjoyed a burst of popularity among conservative YouTubers.[29]

In spite of being nominally very left-wing (in the US political landscape) and supporting Bernie Sanders (a candidate whose labor plan includes punishing companies that refuse to recognize unions), when some crew members decided to unionize,[30] the TYT leadership refused to recognize the union.[31][32]

Refusing to recognize unions is one the traditional methods favored by corporations to crack down on organized labor (along with hiring thugs like the Pinkertons or asking for the government's help). However, Cenk Uygur urged his employees to not unionize rather than outright refusing to do so. His argument against it reads, in an email to staffers:[33]

[T]here is no magic that creates more money by having a union, especially at a company that does not yet make a profit. One of the top concerns I have is that having a union will cost us too much money — and that will not only endanger the company but also leave less for all of us.

It is worth mentioning that Uygur publicly contests the version of the story as published in corporate media while also factually claiming that IATSE endorsed his primary opponent for the US House of Representatives, Christy Smith, in California's 25th Congressional District.[34][35] The implication here is that IATSE only cared about unions within TYT as a political tool to hurt Uygur's chances to be elected, since TYT has existed since 2002 and unions were never a controversy for the employees working for Uygur.

TYT has often drifted dangerously close to supporting conspiracy theories regarding the dangers of GMO foods and the culpability of Monsanto, prompting critics to say their position "is less based on the science and more based on their distrust of corporations".[36]

For example, in a 2017 response to Monsanto's statement that glyphosate is not likely to be carcinogenic to humans according to an EPA report, Kasparian hedged: "but also keep in mind that someone who was working within the EPA at the time that that statement was released had very cozy ties to Monsanto ... and also that they were working with scientists in order to manipulate the outcomes of certain scientific research."[37][38] Earlier, in 2012, Kasparian said: "I think that it's a little naïve to make the assumption that scientists won't get corrupted by money because scientists obviously have an incentive to support GMOs."[39]

Uygur has also expressed disagreement with the current scientific consensus on GMOs:

Beware of people telling you online how the true scientific position is to be pro-GMOs, pro-Monsanto and pro- these chemicals that they're putting in there that they claim coincidentally people got cancer from.[40]

It didn't help that one video's clickbait title, Monsanto Giving People Cancer?,[37][41] seemed to appeal directly to the anti-GMO crowd, and that they favorably interviewed the producer of an anti-GMO propaganda film GMO OMG.[42] 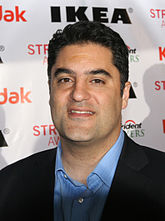 More politely described as an "idealist who sticks to his guns", Uygur has a reputation as someone who likes to fight. In fact, his own father named him after the Turkish word for "battle". In 2016, he was kicked off an American Airlines flight after arguing with a supervisor about delays.[43] His rise as a "righteous ranter" and pioneer of new media was the subject of a 2015 documentary called "Mad as Hell", named for a quote by the iconic fictional TV hothead Howard Beale in the 1976 film Network.[44][45]

Uygur got his start in TV with a public access cable show in the mid-1990s called The Young Turk Show. He was a Republican at the time, so the show followed the typical right-wing talk-radio formula of a combative host lambasting President Clinton and Democrats while butting heads with callers who don't agree with him. But somebody liked his style, and he got a job with a local Miami TV news magazine show. Once while conducting an interview with veteran TV news reporter Connie Chung

, he introduced her as “the irrepressibly sexy Connie Chung”,[46] which at least one detractor has characterized as "sexual harassment". [47]

In the late 1990s, Uygur got disillusioned with the Republican Party. He explained his earlier flirtation with the GOP saying, “you could be, back then, a reasonable Republican”. He adopted a progressive Democratic stance, and earned a stint on MSNBC in 2011, before being dropped and replaced by Al Sharpton.[48] Depending on whom you ask, he was fired for either being too critical of Democrats or gesticulating too much while criticizing Democrats.

People have pointed out that the name of the show "The Young Turks" is the same name used by a Turkish political movement from 1915 to 1918 that committed acts of genocide against the Armenian people. All too often, those of Turkish citizenship or family origin tend to downplay the genocide, or simply not want to talk about it. Uygur is of Turkish descent, and has come under heavy criticism for statements he made in 1991 and 1999 denying that the genocide happened.[49][50] In more recent years, he just avoided the question.[51][52]

Uygur had said TYT's show name was not intended to have any connection to the Turkish political movement, and in 2016, two days before the 101st anniversary of the Armenian genocide, Uygur posted a retraction of "the statements I made in my Daily Pennsylvanian article from 1991," as well as "the statements I made in a letter to the editor I wrote in 1999 on the same issue," formally retracting his earlier denial. Regarding his silence on the topic throughout the years, Uygur has said that "I am going to refrain from commenting on the topic of the Armenian genocide, which I do not know nearly enough about."[53]

When TYT reported on the persecution of Muslims in Myanmar and then Turkish president Erdoğan correctly labeling it as genocide,[54] Uygur was the first to accuse Erdoğan of hypocrisy for the latter refusing to recognize the Armenian Genocide. Uygur said:

They targeted an ethnic minority, and marched them off the country. What does that sound like?

If that wasn't clear enough, he continued:

The temerity of Erdoğan to mention the word genocide when Turkey doesn't recognize the Armenian genocide, where an ethnic minority was targeted and driven out of the country, that's an irony too ridiculous for Erdoğan to bring out.

The PAC to end all PACs[edit]

Uygur has his own political action committee: "Wolf PAC", which he flogs heavily on TYT.[55] Uygur founded it to get money out of politics as a response to the Citizens United ruling, with the ultimate goal being to amend the U.S. Constitution to limit the amount of money that any one person or organization can donate. Wolf PAC's “Convention of States” plan calls for a constitutional convention to draft an amendment to the U.S. Constitution to that end. So far, Vermont, California, Illinois, New Jersey, and Rhode Island are all on the board.

Unlike, say, the Club for Growth, Wolf PAC doesn't raise money and then give it to politicians in the form of campaign donations. Instead, they raise money to pay the salaries of lobbyists who work to convince state legislatures to pass resolutions calling for an amendment to end big money in politics. And sometimes they buy campaign materials for local Democratic candidates, for example, spending more than $50,000 on direct mail to promote Democratic candidate Greg Cava in a 2017 Connecticut state senate race.[56][57]

Naturally, conservative opponents have labeled Wolf PAC as "anti-free speech", [57] and right-wing Redditors and right-wing outlets like The Daily Caller have even pushed a rumor that Wolf PAC is a scam and a grift designed to line the pockets of Uygur and his pals. Citing public records on OpenSecrets.org that identify nearly two-thirds of the organization's expenditures going to salary and overhead, these mostly right-wing detractors erroneously claim the salaries are being paid to Uygur and his staff rather than Wolf PAC lobbyists.[58][7][59]

In January 2017, Uygur announced the formation of the Justice Democrats,

[60][61] a group that wants to move the Democratic Party in more Bernie Sanders-like progressive, social democratic directions by running candidates in primaries against "corporate Democrats" such as Joe Manchin, Claire McCaskill, and Dianne Feinstein.

Uygur resigned from Justice Democrats on December 22, 2017 after blog posts he had written in the early 2000s described as "disturbingly sexist and racist" were unearthed.[62] Uygur apologized for the posts, explaining that he wrote them back when he was a conservative, saying: "If you read that today, what I wrote 18 years ago, and you’re offended by it, you’re 100 percent right. And anyone who is subjected to that material, I apologize to. And I deeply regret having written that stuff when I was a different guy."[63] However, TYT continued to interview Justice Democrats, champion their candidates, and give as much air time to their platforms as possible, including to other progressives who aren't affiliated with Justice Democrats, all the way through the 2018 midterm elections.

Uygur collided with New Atheism figures Jerry Coyne and Sam Harris over the question of whether the causes of religious extremist terrorism could be traced to Muslim fundamentalism or blowback from Western Imperialist actions.[8] The following points emerged over the course of many debates between Harris and Uygur:

Kyle Kulinski, host of Secular Talk and TYT affiliate, has noted that the biggest divide between progressives like Uygur and New Atheists such as Harris is that the latter focus more on religious dogma, and the former focus more on foreign policy grievances.

Some Harris fans decry Uygur as an apologist for Islam. Some Uygur fans find this implausible, given that Uygur: