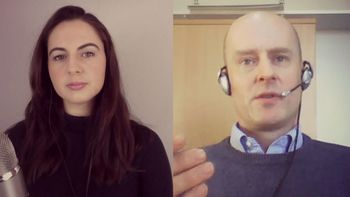 Adam Perkins appeared on a white supremacist YouTube channel Reality Calls for an hour long discussion with Tara McCarthy to promote his book The Welfare Trait.[1] 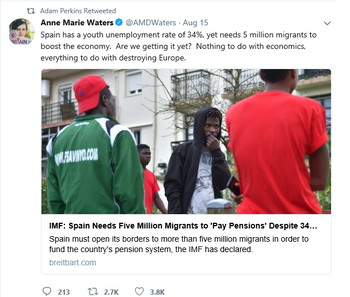 Adam Perkins supports the far-right anti-Islam activist Anne Marie Waters and has retweeted her on Twitter.[2]

Adam Perkins is a HBD pseudoscientist and Islamophobe who lectures in the Neurobiology of Personality at King's College London.[3] Perkins's has published in the controversial journal Intelligence and has been criticized for making "shockingly bad" errors in a science paper.[4] He is the author of the book The Welfare Trait

(2015) that has been criticized for "statistical errors and incorrect conclusions",[5] as well as "misrepresenting studies to suit his thesis".[6]

Perkins holds Islamophobic, anti-immigration and racist opinions, and he sparked a racism row in February 2017 for offensive comments he had posted on Twitter such as Muslim-majority countries "tend to be over-represented in crime & unemployment stats" (using a dubious source of data) and "Somalians don't perform well either side of the Atlantic".[8][9][10] A petition (with 423 signatures) was created by the KCL Somali community demanding Perkins apologize for his Islamophobic tweets.[11] Perkins was involved in more controversy when he spoke on a alt-right YouTube channel to spout his opposition to Muslim immigration to the West and his support for Trump.[12][13]

Perkins attended the pseudoscientific eugenics London Conference on Intelligence in 2016 alongside white nationalists and other far-right speakers, including James Thompson, Michael A. Woodley of Menie, Richard Lynn and Emil Kirkegaard.

The welfare state has a problem: each generation living under its protection has lower work motivation than the previous one. In order to fix this problem, we need to understand its causes, lest the welfare state ends up undermining its economic and social foundations – and endangering those of the nation as a whole. In The Welfare Trait, I present data that suggest welfare-induced personality mis-development is a significant part of the problem. I base this theory on the discovery that childhood disadvantage promotes the development of an employment-resistant personality profile that is characterized by aggressive, antisocial, and rule-breaking tendencies; tendencies that in the jargon of personality research signify relatively low scores on the major personality dimensions of conscientiousness and agreeableness. The conclusion then, is that of a welfare state which increases the number of children born into disadvantaged households will erode the nation’s work ethic by increasing the proportion of individuals in the population who possess an employment-resistant personality profile due to exposure to the environmental influence of disadvantage in childhood.

In March 2018 Perkins was in the newspapers again after he was scheduled to speak about freedom of speech organized by KCL’s Libertarian Society, but protestors shut down the event over past controversies that Perkins has been involved in: "King’s College London spokesperson said that the event was assessed as 'high risk' and was postponed due to the 'current external environment and the recent violent protest.'"[14][15]

Aside from his anti-Muslim bigotry and support for Donald Trump, Perkins has appeared on Tara McCarthy and Stefan Molyneux's YouTube channels to promote his book The Welfare Trait,[16] while he follows alt-right individuals on Twitter (who follow him back), including Mike Cernovich, Steve Sailer, Emil Kirkegaard and Paul Joseph Watson. Perkins also identifies as a proponent of hereditarianism and is a part of the alt-right's HBD online culture.

Another contributor to the London Conference on Intelligence was Adam Perkins of King’s College London, whose book The Welfare Trait proposed that “aggressive, rule-breaking and anti-social personality characteristics” can be “bred out” of society by reducing child support for those on the lowest incomes. Perkins actively engaged with far-right media outlets in promoting his book, appearing in hour-long interviews with Stefan Molyneux and Tara McCarthy. Molyneux doesn’t “view humanity as a single species because we are not all the same”, and argues that “ordinary Africans were better off under colonialism”. McCarthy was banned from YouTube for alleging a conspiracy to commit “white genocide”, and supports deporting naturalized citizens and “killing them if they resist”. Perkins himself attracted criticism last year for tweeting, alongside data from Kirkegaard, that Trump’s Muslim ban “makes sense in human capital terms”.[17]

Perkins has been criticized for publishing studies using flimsy evidence and erroneous statistics:

One wonders (sadly, I doubt it) if any of the journalists responsible will be remotely embarrassed by reading a quite astonishing "corrigendum" (or correction), which appeared recently in the Journal of Personality and Individual Differences (PAID). It deals with one of Dr. Perkins’ papers, which directly underpins the argument in his book. The paper, which was published in 2013, concludes – on the basis of the most astonishingly flimsy, indirect and, it turns out, flatly erroneous evidence – that "the human personality profile in developed countries such as the USA may be gradually evolving by natural selection towards lower levels of personality traits that predispose an individual to be a solid citizen." The correction, which you can read in full here, identified at least seven errors. These included both the misreporting of results and the use of obviously inappropriate statistical techniques. The errors were pointed out two years ago by Dr Andy Fugard, but it's taken the journal this long to correct them.[18]