From RationalWiki
(Redirected from RedState)
Jump to navigation Jump to search
Were you looking for the significantly more reasonable developmental psychologist, Erik Erikson 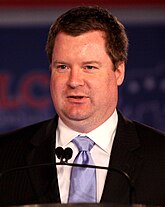 The wild Erickson in its natural habitat: an echo chamber.

Erick Erickson is the managing editor of the conservative blogging platform RedState (Where everything is slavery.).[2]

A leader in grassroots conservatism thanks to his frank rhetoric and willingness to fundraise, he was an important figure in the Republican Party during the Obama Presidency, rising to prominence in 2009 and 2010.[3]

Erickson was a city councilman in Macon, Georgia, which made him more directly involved in politics than most bloggers. It also gave observers a chance to gauge his opinions in a real world setting, as in September 2009 when around 130 Macon policemen attempted to unionize.[4] In his response, Erick son of Erick speculated about the possibility of dissolving the police department entirely in retribution, contracting with the local sheriff for law enforcement.[5]

Unfortunately, Erickson also missed almost half of the full council meetings in 2010 as well as numerous committee meetings. In January 2011, Erickson announced his intention to resign his position before the end of his first term.[6] So much for the Puritan work ethic.

In May 2012, someone called the Bibbs County Sheriff claiming to be Erickson and claiming to have shot Mrs. Erickson — the Police responded accordingly, and discovered this was a tasteless prank.[7] This was a stupid idea, neither funny nor legal. The fool that pulled this only fed Erick Erickson's persecution complex and made his critics look very bad.

RedState is Erickson's main platform for disseminating his views. The site has many columnists[8] and moderators. Despite Erickson's claimed libertarian sympathies, dissenting opinions are suppressed.[9] Through Red State, Erickson has initiated several campaigns of note.

Erickson's first project was a joint operation with Michelle Malkin. The Operation was aimed at "tracking down all the people from the McCain campaign now whispering smears against then-Governor Palin to Carl Cameron and others… It is our expressed intention to make these few people political lepers."[10] The "Operation" promptly went nowhere and was more or less forgotten by the time his next project rolled around.

By 2009, Erickson had realized that real change would require him to harness the full power of his web community. With that in mind, he created set up the Red State Wolverines Strike Force.[11] Members of the Force would periodically receive assignments from Erickson himself. The first "mission" was a simple request to vote for Red State as "Best Conservative Blog" in the 2008 Weblog Awards[12], a mission carried out with great skill by the members.[13]

Most subsequent missions involved the Force members buying and sending random tchotchkes to politicians, including Silly Putty eggs, rubber balls, and bags of rock salt. Erickson failed to mention that all the purchase links go through his Amazon page, meaning he profited from his "missions".[14]

Seeing the success of large scale meet-ups like YearlyKos/Netroots Nation, Erickson attempted to organize his own meeting, dubbed the Red State Army Gathering[16] The event was moderately successful… in that it attracted about 1/6th as many attendees as the first YearlyKos.[17]

That's right. Erickson spent almost three years as a commentator on CNN,[18] eventually departing to join more like-minded individuals at Fox News.[19] He admitted that "before I went to CNN I was oblivious to the fact that there are ways to say things, without sacrificing or compromising my view or principle, that come off as more respectable and honest without invective than how I might have otherwise said them... CNN made me mindful of that."[20]

Someone at CNN was probably fired for this.[citation NOT needed]

Influence in the 2012 presidential election[edit]

RedState (which is ultimately controlled by Erickson) maintains an editorial policy of "conservative in the primary and the Republican in the general".[21] In practice, this means editors and readers spew lunacy about their preferred candidate and obsess over ideological purity, then fall in line once their social betters have picked the most palatable candidate.

Erick Erickson was less than thrilled with Mitt Romney's "inevitability"[22] and until the bitter end, endorsed fellow Georgian Newt Gingrich for the 2012 Republican nomination.[23]

On the campaign trail, Romney tried Erickson's "47 percent of Americans don't pay taxes" canard, and it only made people like Romney less. It would seem that Erick Erickson and his ideas are only clever inside his echo chamber.[24]

In the wake of the 2012 Vice-Presidential Debate between Joe Biden and Paul Ryan, Erickson made various whiny remarks about moderator Martha Raddatz, prompting CNN talking-head Soledad O'Brien to reply, "you have lost your mind."[25]

Although Mitt Romney lost, some of Erickson's favored Tea Party candidates won, such as Ted Cruz, now a US Senator for Texas and an all-around rotten individual.[26]

Influence in the 2014 mid-term election[edit]

Influence in the 2016 election[edit]

In 2016, Erickson -- deeply concerned about how Trump's "immorality" and "deviancy" was contrasting with his conservative Christian values -- became one of the more prominent pundits of the "Never Trump" conservative movement... even banning Trump from a Red State Gathering after Trump made tasteless remarks concerning Megyn Kelly's menstrual cycle. [29][30]

Influence in the 2020 election[edit]

In 2019, Erickson -- deeply concerned about liberal boogeymen or something -- endorsed Donald Trump.[31]

Jesus only wanted us to care for poor Christians. How does Erickson know? Cutting aid programs that help all poor people is quite acceptable to Erickson.[32]

As if Atlanta traffic isn't bad enough and doesn't make you want to end your life for being stuck in it, someone at WSB Radio apparently thinks we haven't suffered enough and gave Erickson an afternoon radio show called "Atlanta's Evening News With Erick Erickson." Erickson delivers a disorganized mess of a show where he uses no notes nor anything written down, and you can only conclude he got this gig because he plays golf with the owner of WSB or something. He proceeds to regurgitate his tired conservatism and blasts Democrats for the entirety of the show and calls that 'news.' There should be a study on abandoned cars on the side of the road and listeners to the radio show and see if the two correlate.

Oh, and if you were waiting for the quotes[edit]

When dealing with an intellect of the caliber of Mr. Erickson, it's often best to let his own words speak for themselves. The following is a greatest hits collection of Erickson's wit and wisdom. (For more, just read the titles of his blog posts.)