From RationalWiki
(Redirected from McCain)
Jump to navigation Jump to search 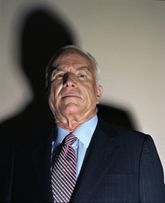 McCain haunting the halls of the capitol building c. 2008

Jonathan Sidney "John" McCain III (29 August 1936 – 25 August 2018) was a Vietnam War veteran, former Navy lobbyist[1], the senior senator from Arizona from 1987 - 2018, and the Republican Party's candidate for the Presidency of the USA in 2008.[2] He lost decisively to Barack Obama. McCain's running mate was Alaskan Governor Sarah Palin.[3]

After his defeat, McCain and his sidekick Senator Lindsey Graham of South Carolina devoted themselves to complaining about President Obama's "soft" foreign policy. However, when Obama was replaced by Donald Trump, McCain became Trump's most outspoken critic within his own party.[4]

John McCain (b. 1936 in the Panama Canal Zone) was a strong force for ostensible moderation in the GOP, at least at a particular point in his life as his complete track record is mixed and often disappointing.

Over the years, he was vital in crafting bipartisan support for generally supported initiatives, including the Bipartisan Campaign Finance Reform Act (BCFRA).[note 1] McCain also once stood up against the American Religious Right, referring to them as agents of intolerance.[6] These sensible, moderate policies made him persona non grata among extremists, earning hate and scorn from Ann Coulter and Sean Hannity.[7][note 2] When running for President in 2008, he stood up to some of his constituents making unsubstantiated allegations against Barack Obama, saying he was a decent man.[8] He was the de facto leader of right-wing opposition to the Trump administration, and he was the deciding 51st vote to not repeal Obamacare.[9][10][11] The moment McCain gave a thumb down was quite dramatic.[12]

McCain knew about Paul Manafort's connection to Russia and prevented him from running the 2008 RNC.[13] This is worth pointing out because Manafort served as chairman for the 2016 Presidential Campaign of Donald Trump, who was investigated for his ties with Russia.

McCain also condemned Trump for pardoning Joe Arpaio, who was/is known for discrimination toward Latinos, staging an assassination plot during his re-election bid, causing one man to spend four years in jail awaiting trial because of it, and let one teenager be repeatedly raped by her uncle for four years.[14][15]

With Senator Bernie Sanders (Vermont), John McCain introduced legislation giving military veterans the option of private healthcare at public expense if they have to wait for too long at Veterans Affairs. President Barack Obama signed the bill into law. McCain expanded the law in his last months. President Donald Trump signed the new bill.[16]

Despite his record for opposing the more blatantly maniacal portions of the Republican Party, he had quite a few sleazy actions under his belt. His unofficial economic advisor, for instance, was Phil Gramm, chief architect of the Enron collapse and sub-prime mortgage crisis.[citation needed] There was also the severe and infamous blunder of choosing Sarah Palin as his vice-presidential running mate,[note 3] who would have become president in the possible event that McCain died of old age while in office.

Despite being painted as a maverick, John McCain had several instances where he stuck firmly in party lines. He voted for the thoroughly awful trickle-down 2017 Republican tax bill, citing his care about "honor",[17] and was opposed to net neutrality.[18]

Despite opposing the Affordable Care Act's repeal, John McCain thought emergency rooms are a good way to get health care and that no one in America is technically uninsured.[19] Neither is true.

Also, McCain aligned himself with some real nutjobs, including John Hagee, who blamed the gays for Hurricane Katrina,[20] and Rod Parsley, who believes the United States was founded in part to destroy Islam.[21] In addition to aligning to socially conservative nutjobs, he was devoutly anti-abortion and wanted to defund Planned Parenthood.[22] A President McCain would have nominated Justices who would be all too eager to torpedo the right to choose and other important precedents.[23]

He modified many of his positions rightward when he became a presidential candidate. While he was no George W. Bush, Americans did not want four more years of the policies of Bush's policies, from failed tax cuts to continuing the war in Iraq, and (at least attempting to) privatize Social Security.

He wanted the U.S. military to police the entire Middle East to make it safe for Saudi Arabia, the other authoritarian Arab monarchies and Israel. Ergo, he wanted to bomb bomb bomb, bomb bomb bomb Iran.[25][26][27]

He supported Don't Ask, Don't Tell,[28] attacking President Obama by insisting that he believes in honoring all of the US troops — and because of that the US needed to keep DADT in place.

He was a strong opponent of torture, having suffered a similar fate in North Vietnamese internment, which has earned him the title of "war hero."[29]

Changing his mind for the worse[edit]

John McCain changed his mind on multiple issues. From the results, it's telling that he usually did this to maintain conservative support, and he was bankrupt in principles.

To the chagrin of Birthers, John McCain was born in the Panama Canal Zone, which is now part of the Republic of Panama and was once a U.S. protectorate but never really part of the U.S. At best, its status was similar to that of the Swan Islands (now part of Honduras) or Palau (now an independent nation). However, the Supreme Court decided that nobody cared and said that it didn't matter, because his parents were off playing Navy in Panama during the whole thing.

As a Panamanian-American, it was questionable whether McCain was eligible to assume office if he was elected. This question came up previously concerning Barry Goldwater (born in the Arizona Territory before it was admitted as a state), and George Romney (born in Mexico to U.S. Mormon expat parents). Still, since both were failed candidacies, the courts have never had the opportunity to decide whether a natural born citizen is limited to those born within any of the states.[note 4] However, constitutional and legal experts are generally of the opinion that if someone was born a citizen, that would qualify for the "natural-born" requirement, whether it was within the US or not; in others words, "you can be a natural born citizen without actually being born in one of the 50 United States."[39] In fact, a lawsuit seeking to remove McCain from the California ballot in 2008 due to his place of birth was issued by the chairman of the American Independent Party, although it was quickly thrown out by a federal judge, who agreed that McCain was a "natural born citizen".[40] 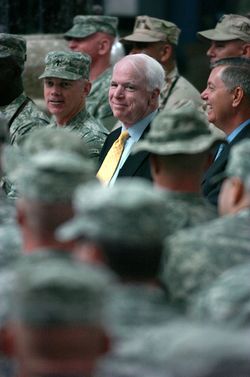 John McCain and Lindsey Graham with U.S. troops in Iraq.

On missions and their accomplishment[edit]

On modern peace and war[edit]

On Asians, although he meant North Vietnamese prison guards[edit]

On Iraq and sectarian violence between Sunni and Shia muslims[edit]

On labeling Iranians as monkeys[edit]

The McCain Institute for International Leadership is a think tank founded in 2012 devoted to "character-driven global leadership".[54] Its trustees include failed VP candidate Joe Lieberman and disgraced General David Petraeus[note 5], while its fellows include former UK Chancellor of the Exchequer George Osborne. It hosts an annual event at Enchantment Resort in Sedona, Arizona, at which the likes of Joe Biden, Hillary Clinton, and ex-Batman Ben Affleck have gathered for sex parties some kind of chat about making the world a better place for millionaires and their chums. There have also been claims of conflicts of interest, with donors to the institute being affected by laws that McCain was totally coincidentally voting on.[55]