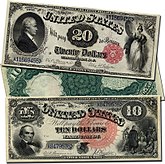 The U.S. dollar (logographically, $; code: USD) is the currency of the United States, as well as a few other countries such as Ecuador, El Salvador, and Timor-Leste. Additionally, there are several other currencies that have their value tied to the U.S. dollar, such as the Panamanian balboa

(which is set to US$1 = EC$2.70). It has been the de facto worldwide reserve currency since soon after World War II. This international prominence reflected the nation's new-found economic might, due mostly to not having its heavy industry bombed out of existence as was the case with most of the rest of the developed world. 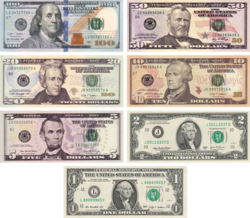 has also been proposed a few times as a way of dealing with the U.S.'s debt ceiling when Congress is being obstructive, but none have yet been minted. Pennies cost much more to produce than they are worth and rarely circulate due to their low value, costing the government a lot of money, but attempts to stop producing pennies have failed due to the lobbying of the zinc industry.[3]

The Susan B. Anthony, Sacagawea, and Presidential dollar coins represent three (failed) attempts by the federal government to encourage people to stop using the paper $1 bill. Paper dollars typically last 18 months in circulation before they need to be replaced, while coins can last for upwards of thirty years. Other countries (e.g. Canada and the UK) circumvented this issue by just not printing low-denomination paper money any more; the U.S. continued to print $1 bills alongside the $1 coins, and as a result the coins utterly failed to catch on each time. Despite early success, the presidential dollar coin ultimately ended up failing due to an oversight by the U.S. mint. To encorage their use, the mint sold them online with free shipping and allowed use of credit card payments. That was a mistake, as people would buy boatloads of the coins for credit card benefits such as airline miles, and then deposit all of their bought coins back into the bank, preventing the coins from coming into circulation. The U.S. mint shut down this loophole in 2011, and the remaining coins were printed mainly for collectors in much smaller numbers. Ultimately, most of the coins would end up in Ecuador, which also uses the U.S. dollar.[4]

After $100, there are/were a number of bills that existed with higher numbers largely for trading large amounts of money[7]

As one of the most commonly traded currencies, as well as attracting large numbers of coin collectors, the U.S. dollar has been the subject of many scams to be aware of.

Coins of the U.S. dollar have historically been stored in coin wrappers

when they were being traded between banks and businesses. This sparked a wave of "coin rolling" scams, where the coins in the roll will be replaced by lower-denomination coins, slugs, and washers when trading them for the full value in cash.[8] Similar scams have popped up online as well, with scammers selling supposedly machine-rolled coin wrappers that could potentially contain rare coins when in reality they have been tampered with and contain nothing of value.[9] In general, it is recommended that you don't buy coin rolls online and that you should check to make sure a coin roll is legitimate before exchanging it with money.

Many unscrupulous sellers will sell gold-plated quarters or other currency, claiming that it's rare and a good investment. In reality, this is a scam, as these coins are not made by the U.S. mint but are rather modified by third-parties who gold-plate the coins. The layer of gold in these coins is very thin and only worth a couple cents at most, and it would cost more to extract the gold than the gold is actually worth. Gold-plated quarters are truly only worth a few cents above face value, if even that.[10]

President George W. Bush aptly managed the decline of the dollar. Apparently oil-fueled trade deficits and abominably expensive and unnecessary wars weren't a good idea.[11] During his term, the dollar dropped a whopping 41% against the Euro.[12] Heckuva job. 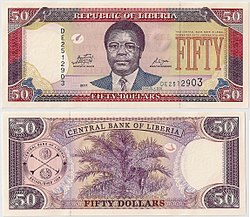 This actually is functionally identical to one U.S. dollar, but only in Panama.