James David Manning (1947–) is the chief pastor at the "All The Land Anointed Holy" (ATLAH) World Missionary Church, in New York City. Manning is most infamous for his virulent opposition to gay rights. Manning has frequently stated that not only does he wish LGBT people to be stoned to death, but for Jesus himself to do the stoning. (Good luck with that!) Manning is notorious for using ATLAH's church letter boards to express his toxic homophobia, which often rivals that of the Westboro Baptist Church. Manning has his own Internet series, the Manning Report.

Manning believes former President Obama to be obsessed with homosexuality (unlike himself).

Manning frequently recycles arguments in his preachings, noticeably on the Manning Report. One such example is his long-standing claim that Starbucks' lattes use semen from gay men, which is intended as a means of engaging in oral sex without the participants knowing each other.[3] This wild story evolves significantly over time with another video instead claiming that Starbucks coffee uses artificial semen and that semen is actually milk (why he didn't just say "artificial milk" is anyone's guess).[4] Manning constantly claims he is persecuted by the "Sodomite Mafia." In March 2015, Manning reported that "they" had sent him a bucket of poop.[5]

Manning claims that Obama is the son of Satan (after backpedaling on his claim that Obama was the Antichrist). Big shock, he's a birther too.

Manning has said he is ashamed to be black, and frequently bashes black society (goes so far as to regularly call black people niggers — derogatorily). He frequently claims Obama, Al Sharpton, Jesse Jackson, and other black leaders are trying to start a race war. (And he isn't, of course.) However, Manning ultimately believes black America is being attacked primarily by white people (more specifically, white liberals), and frequently states homosexuality is a "white disease". Strangely, he also seems to dislike the Tea Party and other conservative groups like World Net Daily, at least in part because of racism. Go figure.[note 1]

Manning accepts stereotypes about black people. He notes that black people can be doctors, lawyers, astrophysicists, but maintains that "Black folk don't know how to run no nation." Manning ignores Gabon,

Kenya, and other countries where economic development is growing and living standards of the people are rising.

Manning cherry-picks cases where he thinks black people have failed. Manning claims South Africa became worse after the end of apartheid, and criticizes Nigeria where oil companies make a profit while the people remain poor. He imagines that black people "Can't understand the world", and argues that "There's something wrong with the black man mind." and "The nigger ain't got no sense." And only God can help.[7] 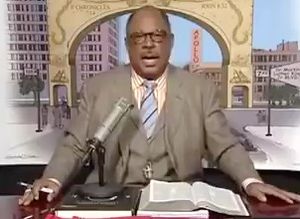 "Every sodomite butthole will get cancer in the butthole!"[8]

He has come up with several other bizarre conspiracy theories on his show. If/when you aren't offended by his insane bigotry, you should really check out some of his insights (or lack thereof, anyway). These include:

Manning owes $1.02 million due to unpaid tax, unpaid water bills and general debts and his church is due to be sold compulsorily at public auction.[22] The Ali Forney Center

, a group providing for homeless LGBT youngsters, has raised $200,000 in cash and hopes to buy Manning's church.[23][24] Manning became very angry over this and he imagines it will not happen unless 'men give birth through their anus'.[25] Manning and his congregation have threatened to arm themselves and barricade themselves inside the church in an effort to keep it.[26] There is a temporary stay over the forced sale till a full court hearing on the 21st April 2016.[27] The Ali Forney Center plans to use the time to research a good financial package before bidding for the church.[28]

Manning initially endorsed Donald Trump in December of 2015;[29] however he withdrew his support in June 2016 when Trump sent concilliatory messages after the Orlando shootings

.[30] In August during the campaign, when Trump's organization was undergoing chaos and a shake-up after the firing of Paul Manafort and Corey Lewandowski, Manning offered to take over.[31] In September Manning told Alex Jones of InfoWars that Hillary Clinton's own internal polling told her Donald Trump was leading in battleground states and had enough to win.[32] Immediately after the election,[33] Manning again withdrew his support from Trump and warned white people they were under God's judgement.[34] [35] Manning now refers to him as "Tribulation Trump".[36]

In 2014, Manning boasted of being privy to information of Putin's plan to interfere in America's domestic politics and subvert democracy.[37]