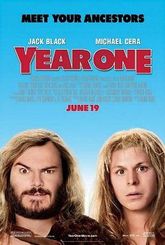 Year One is a comedic film which came out in 2009. It was directed by Harold Ramis[note 1] and starred Jack Black and Michael Cera as pre-antiquity Sun-worshipping hunter-gatherers Zed and Oh[note 2] who are banished from their tribe. The plot of the film involves their adventures beyond what they had previously conceived as the edge of the world into Old Testament history.

The film has has a very low rating on Rotten Tomatoes,[1] for reasons we shall explain below.

Basically, it seems the point of this movie was to do for the Old Testament what Monty Python's Life of Brian did for the New Testament. In a time when stories about Christianity dominate both the national conversation[note 3] as well as Hollywood (The Da Vinci Code, Angels and Demons, The Exorcist, Legion, Constantine), it is understandable that a few subscribers of Judaism would want to make a film about the stories that are relevent to them—never mind that Mel Brooks already did it with History of the World, Part 1 (in which the jokes were mostly about Moses, but there was also a good scene in about the Last Supper from the New Testament).

Before they are banished for accidentally burning down their tribe's camp, Zed eats a golden apple from a tree they are forbidden from eating. He claims to suddenly see the world in a different light, and wonders if there is more to the world than their simple existence. However, when Oh asks him complex questions that challenge their worldview, Zed replies with "Pass". They flee the tree after seeing a snake.

In their travels, the main characters interact with various characters actual people from the Old Testament:

The rest of the story has no true Biblical parallels, as it involves rescuing the tribe members from the Sodomites, who worship a false idol and sacrifice virgins to a flaming altar. They end up saving Sodom from destruction by instigating the deaths of its king and high priest after Zed tells everyone that he is their Chosen One and that there's no reason to waste perfectly good virgins.

Okay, so what's your point?[edit]

While the movie fails to transcend the typical comedic golden nuggets (specifically, sodomy, homophobia, and dick and fart jokes), there are a few concepts that could be imparted upon the viewer that promote rational thought.

One concept is that personal growth and improvement is obtained through expanding your point of view beyond your own experience. It is through adventure and an open mind that our lives become richer and our dreams are achieved. Fastidiously holding onto traditions and observing pre-ordained hierarchies does not give one the chance to expand their horizons.

The other concept is that each of the Old Testament references mentioned in the movie could very well have been events that actually occurred—and in this case, all around the same period of time, not with hundreds of years between them. However, in the film there is no direct interaction by the Biblical God, nor is there any pretext that suggest the stories would ever be written down into a form of Scripture. By this portrayal of Old Testament stories as simply events that occurred during everyday life, the film brings those stories down to Earth, rather than holding them up high as the Word of God. Thus, there is an underlying suggestion that other parts of the Bible could be simply regular stories turned into religious lessons as well.