From RationalWiki
(Redirected from Extraterrestrial life)
Jump to navigation Jump to search
If you want to find out more about the possibility of life existing elsewhere in the universe go to our exobiology article — this one is dedicated to scary monsters.
This article concerns undocumented migrants from outer space. Not to be confused with Earthling illegal aliens.

Take me to your leader.

Because of the sheer scale of the cosmos, the possibility that we are the only form of life in the entire universe is remote; therefore some form of life is likely to exist elsewhere on other planets, natural satellites, planetary-mass objects and brown dwarfs.[1]

Claims that some UFOs are of extraterrestrial origin and claims of alien abduction have not been substantiated and most examples of both phenomena can be easily and simply explained without invoking little green men with anal probes.[note 1] Firsthand accounts of interactions with ET's tend to be anecdotal and often unreliable with little or no physical evidence presented. As a result, investigation of alien encounters by science is difficult. Since ET's seem reluctant to do their abductions near anyone appropriately equipped to document them, we have no hard evidence or reason to believe that they are on Earth interacting with us on a near daily basis. 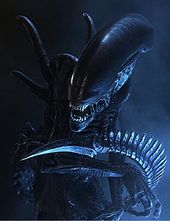 Typical alien. Keep shotguns and slugs ready at all times

The aliens that have supposedly come to Earth have been described as appearing in many different forms. This indicates either that planet Earth is improbably interesting to several varieties of aliens — or that the reports themselves are the result of hyperactive human imaginations.[note 2]

) enough to be quite similar not just to us, but to each other. With minor variance, we're talking: the same body outline, amount of arms, legs, mouths (save for the Xenomorph), eyes, ears and so on. This implies that they might all share an evolutionary timeline — and for that to be true, they'd basically all have to originate from the same planet.[note 3]

So, did they all come here from the same planet on separate missions, unaware of each other...? Are they perhaps part of some epic space opera galactic war, and we're thrown smack-dab in the middle of it, as if taken right out of TVTropes? Actually, since they're so humanoid, and so attuned to earthly conditions — never mind often described as having the ability (and desire) to have sex with humans (!)[note 6] — it is actually far more likely that they originate from Earth. A result of that, however, is that it's more likely still that they originate from the imaginations of creatures from Earth.[note 7]

Interestingly, all species of aliens are consistently described as being about the size they'd have to be in order to be able to interact with us in a way that we humans find meaningful — never disappearingly small,[note 8] never the size of Godzillas (though the square–cube law

In fact, there is often a good correlation between the culture describing the aliens and what said culture claims the aliens look like. The "Grey" species is undoubtedly the most commonly imagined and the most commonly depicted in fiction, from Close Encounters of the Third Kind to the Asgard from Stargate. Essentially not different from the elves or orcs of fantasy, in that they're basically humans with caricatured features — and what's more, the features are supposed to represent their qualities. The noble and eloquent elves — humans that all look like models. The proud and mighty orcs — humans that all look like Kali Muscle.[note 9]

The dreadful Xenomorphs,[note 10] on the other hand, don't look like tool users. They don't look technological. I mean, ask yourself. How would they fit into a cockpit and operate pedals and stuff? And besides, they don't use tools in the movies. They don't wear armor, they're born armored. They don't wield weapons, they are a weapon. Like the predators we've evolved to fear — snakes and tigers and the like — the Xenomorphs rely on their senses. Yeah — they're born fully decked killing machines. And from eggs, too — eew.[note 11] They don't look social. They look like lone hunters who predate upon soft-bellied, social animals like us. Yeah. And that definitely means they can't have tool use.[note 12] Besides, they don't have the temper for it. Because we know it takes social, vaguely ape-like vertebrates to ever have tool use. Right?

Now, you might object — the Xenomorphs are fictional! Boy, do we have news for you...[note 13]

Similarly, the "flying saucer" shape only became prevalent after UFOs were reported as being "saucer-like", which people misinterpreted as being a description of shape, rather than how they moved through the sky. Some early close encounters reported dart-shaped or cigar-shaped rather than saucer-shaped UFOs, before the saucer meme became predominant.[note 14]

Either way, "respected"[note 15] scholars have identified several different species of alien. They include:

The Wow! signal was a radio signal which was received by the Big Ear Radio Telescope on August 15th, 1977. It consisted of 72 seconds of unusually organized signals. There are many speculations on the origin of the signal, with one of them being that the signal is of alien origin. Despite the very odd organization of the signals, this is not definitive proof of alien life; it is a stretch to jump to that sort of conclusion as there is no evidence pointing to the signal being sent by an alien race. It has been argued that a better explanation for this signal is just some deep space oddity that we have not discovered yet.[8] A common misconception is that The Wow! signal is some sort of message that contains information, the reality is that it was just an narrowband radio signal, nothing more. To put it simply: many things in space generate radio waves that we capture on a daily basis, it's just that the pattern and intensity of this signal was quite odd. The data itself is unfortunately quite insubstantial to draw any real conclusion[note 17] but that still hasn't stopped people believing wholeheartedly that ET has phoned earth.

A common myth is that "6EQUJ5" is a code broadcast by aliens. However, the characters simply refer to the intensity of the signal in base 36. It recorded 6 signals, with the intensities of 6, 14, 26, 30, 19, and 5 in short succession.

In 2017, the Buzzkill Squad a team of researchers with the Center of Planetary Science determined that the sound likely came from a cloaked Klingon spacecraft the 266/P Christensen comet, which was unknown in 1977 but occasionally emits unusual frequencies due to an attached hydrogen cloud.[9]