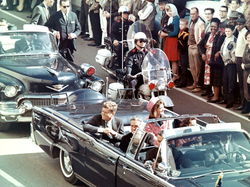 JFK minutes before the Martians killed him.

The assassination of John F. Kennedy is one of the most popular sources for conspiracy theories. The people who subscribe to these theories often focus on the idea that Lee Harvey Oswald did not act alone, that he was a "patsy," or that Oswald didn't commit the murder at all. They also often argue that shots were fired from the "grassy knoll" near Dealey Plaza in Dallas, and not only from the Texas School Book Depository from where Oswald shot Kennedy. Some conspiracy theorists also believe that the Warren Commission report was a coverup.

JFK conspiracy theorists are notoriously fractious and may hold to one of several competing theories:

Conspiracy theories about the assassination are still popular on both the left, right, and amongst the American public.[5] 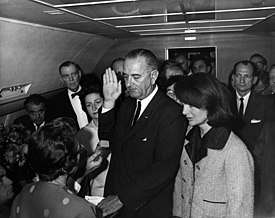 Lyndon Johnson takes the oath of office, with Jackie Kennedy next to him.

The first official investigation was undertaken by the Warren Commission, which concluded that the assassination was not a conspiracy, and all official investigations after it have more or less accepted its findings. The United States House Select Committee on Assassination, however, concluded that there is a high probability that the assassination was a conspiracy.[6] However, the evidence which they based this on (an audio recording by a police officer at the scene) was later debunked (not that it stops the theorists).[7] While they released their report in 1979, the "official story" had been under systematic attack from critics since the beginning-this only fed the fires.

Two early books critiquing the Warren Commission report were Inquest by Edward Jay Epstein, and Rush to Judgment by Mark Lane. Both hinted at a conspiracy and were relatively tame by today's standards. Mark Lane later went off the deep end with conspiracy books on several other subjects (including the Jonestown mass suicide, and the assassination of Martin Luther King). The John Birch Society was an early proponent of an assassination conspiracy theory, with an article by Revilo P. Oliver

claiming the KGB did it. Liberty Lobby later took up the assassination conspiracy theory and wooed Mark Lane into defending them in a libel lawsuit brought against them by "Plumber" E. Howard Hunt

, in response to an article in Spotlight newspaper claiming Hunt was implicated in the assassination. Louisiana district attorney Jim Garrison

prosecuted New Orleans businessman Clay Shaw in 1969 for conspiracy to murder in the Kennedy assassination, claiming that it was the job of a bunch of homosexual males, including Lee Harvey Oswald and Jack Ruby, the motive being it was a "thrill killing"; the jury took 54 minutes to find Shaw not guilty. Shaw even went a step further by disproving the theory himself inadvertently in his effort to support Garrison's claims (though only selectively-he left out the "homosexual thrill killing" idea) in his film JFK, which actually shows that the shots by Oswald could have happened just how the Warren Commission concluded, directly opposing the film's claim and that of conspiracy theorists in general.[8]

Another more reliable book criticizing the investigation came from task force member Gerald Ford. In A Presidential Legacy and The Warren Commission, Ford stated that the CIA destroyed or kept from investigators key facts that would expose operations—which, he said, could easily be read the wrong way as collaborating with the assassination.[9][10]

Two popular films portraying the Kennedy assassination as a conspiracy were Oliver Stone's 1991 flick JFK,[11] based on Garrison's theory, and the 1973 movie Executive Action,[12] based on Lane's theory that a cabal of right-wing businessmen was behind the assassination. JFK assassination conspiracy books proliferated, in particular, after the popularity of the 1991 film, ranging from the meh to the completely ludicrous. Public reaction to the film caused Congress to enact the JFK Records Act and establishing the Assassination Records Review Board which released (almost) all records of the investigations by October 2017.[13] 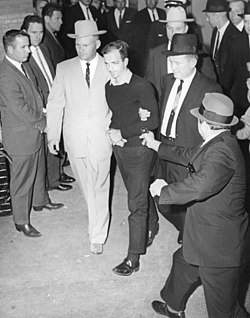 Oswald, moments before being killed by Jack Ruby.

Lee Harvey Oswald did it.

Why? It was due to a lack of bowling alleys and nightclubs. No, really.[14] More immediately, he hung out with Castro sympathizers in Mexico City during his unsuccessful attempt to get a Cuban visa, some of whom voiced the opinion that Kennedy should be killed in retaliation for his attempts to have Castro assassinated.[15] According to CIA files released in 2017, Oswald visited the Cuban and Soviet embassies in Mexico City, and on September 28, 1963 he met with "a Soviet consular official named Valery Kostikov, the reputed head of the KGB’s assassinations operations."[16][17] Oswald did live in the Soviet Union for about 3 years, after making several attempts to defect which were declined as the Soviets viewed him as mentally unstable. After an attempted suicide, the Soviets finally let him stay reasoning that a dead American on their watch would be far worse, and furnished him with a job and apartment in Minsk, Belarus. Oswald would later become bored and return to the US. He was viewed poorly for the most part by the Soviets, with an internal Soviet memo describing Oswald as “ a neurotic maniac who was disloyal to his own country and everything else." Oswald was never given Soviet citizenship.

Oh, and the KGB spread many of the other conspiracy theories, because they knew that given the climate of the time, the Soviet Union was likely to be blamed and they wanted to mitigate that to some extent — it appears to have worked more than they ever imagined. They knew fairly early on that American intelligence didn't believe they were involved, but if the American public was to hold a widespread belief that the Kremlin had Kennedy killed, not only would the door be open for retaliation (some nutjob shooting up Soviet embassies, for example) but it could cause the public to press for war. If declassified Soviet materials are to be believed, they were just as surprised as the Americans by the assassination.[18]

The "magic bullet" theory that so often pops up among the conspiracy theories is also based off the seating of the people in the car, Kennedy included. However, if one actually looks at the seating arrangements in the car, then the theory, and any that expand on the idea, are defunct instantly. The theories claim that Governor Connally was sitting in front of Kennedy, and that this proves that Kennedy couldn't have been shot by Oswald. In reality, Kennedy was in the back, and Connally in front of him but slightly to the left and sitting significantly lower than Kennedy on a jumper seat. Connally was in fact always in the path of Oswald's shot. Indeed, the entire thing can be disproved by the way everyone was sitting when Kennedy was shot. Additionally, a closer look at the Zapruder film shows Connally's lapel flip outwards at precisely the moment the first bullet strikes Kennedy.

The theory that there were multiple shooters is discredited by the fact that no bullet fragments or shells other than what came from Oswald's Mannlicher-Carcano rifle were discovered anywhere by anyone in Dealey Plaza, the limousine, Parkland Hospital, or in the bodies of Kennedy or Governor Connally.

There are still some unanswered questions concerning the event, like the infamous and unidentified Babushka lady who appears to have filmed it, as well as reports that someone, probably mentally ill, made calls in California saying that Kennedy was going to be killed in Dallas that day. The latter is most likely coincidence and could be a fabrication, and the former, even though the footage would offer another, more detailed perspective on Kennedy's death which could be much more valuable than the footage we have, is most likely unimportant to the bigger picture.

However, Oswald's death and the failure to prevent it is questionable, as it prevented his trial, obviously, and only fanned the flames of conspiracy. Had Oswald been properly protected, and not left wide open for Jack Ruby, which, admittedly, no one could have seen coming but in hindsight should have been accounted for, maybe a lot of this nonsense could have been put to rest before it spread.

Much like Abraham Lincoln, nobody knows what would have been different if Kennedy hadn't been shot.