From RationalWiki
(Redirected from Father Coughlin)
Jump to: navigation, search 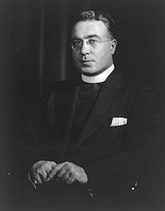 Father Charles E. Coughlin (pronounced "COG-lin") was a Roman Catholic priest who is often cited as a prototype of right-wing talk radio. He was popular during the Great Depression.

He was originally a supporter of Franklin D. Roosevelt and the New Deal, using his radio program to promote Roosevelt for president in 1932. He was known for the slogan "Roosevelt or Ruin!" and referred to the New Deal as "Christ's Deal".[1] After 1934, however, he turned on Roosevelt for supposedly being too soft on the big banks and began taking on an increasingly cranky tone, turning toward the political right.

Ironically, the man who made a name for himself spewing antisemitism and conspiracy hysteria began his radio preaching in 1926 (on Detroit radio station WJR) after members of the Ku Klux Klan burned a cross on the front lawn of his church.

Coughlin was obsessed with monetary policy, espousing some crank ideas about "sound money" which he claimed would put an end to the Depression. Unlike many modern proponents of similar ideas, he opposed the gold standard, which he saw as putting control of the U.S. money supply under the control of "the money manipulators". Likely, his early support of Roosevelt came about because he saw Roosevelt as somebody who would, in his words, "drive the money changers from the temple", and Roosevelt did indeed take the U.S. off the gold standard in 1933. It is also likely Coughlin turned on Roosevelt shortly thereafter because Roosevelt showed no interest in enacting Coughlin's other, more esoteric proposals. Among Coughlin's views was an opposition to the Federal Reserve bank, a view held to this day by many cranky "sound money" advocates, some of them for anti-Semitic reasons on the grounds the Fed is allegedly controlled by Jews.

In 1936 he formed a short-lived alliance with Francis Townsend (originator of the Townsend Plan), and with anti-Semitic demagogue and Nazi sympathizer Gerald L. K. Smith, to form the Union Party to contest the 1936 elections against Roosevelt. After the Union Party failed miserably at the polls and disbanded following the 1936 elections, Coughlin announced his retirement from the airwaves, but returned within a few months with a program which often increasingly expressed anti-Semitic views, opposition to the League of Nations, and sympathy for Italian dictator Benito Mussolini and for Francisco Franco's far-right insurgency against republican Spain. He peddled conspiracy theories about Jews as the driving force behind major world events such as the Russian Revolution and the Great Depression and as being in league with communists.

While repeatedly claiming to oppose "Hitlerism" and the Nazis, he also excused Nazism as coming about as a self-defense mechanism against Communism, which in turn had come about as a necessary self-defense mechanism against (Jewish) capitalism. He also claimed Germans wouldn't be persecuting Jews if "Jews" hadn't first persecuted Christians in the Soviet Union. Yes, he is conflating Jews with Communists here, and the Soviet Union's official atheism with the persecution of Christians. You get where this is going. Shorter tl;dr version: Coughlin would have people believe Nazism was the Jews' fault.

He founded an organization called the National Union for Social Justice and a publication called Social Justice[note 1], which in 1938 printed weekly installments of the antisemitic fraud The Protocols of the Learned Elders of Zion. In 1940, he published copies of the book The Rulers of Russia by Father Denis Fahey, which singled out Jews to blame for the Bolshevik revolution in Russia.[note 2] In 1940 with the imminent U.S. entry into World War II, the Catholic Church ordered Coughlin — who by then was openly expressing support for the Axis powers — off the air and to return to his duties as a parish priest in Michigan. His periodical Social Justice was barred from the U.S. mail shortly after in early 1942 as the U.S. media went on a heavily censored wartime footing. He remained a parish priest until his retirement, resurfacing only decades later to do the occasional interview, and died in obscurity in 1979.

Coughlin's radio program employed a ranting style which often began soft-spoken and "religious" sounding, often with gusts of purple prose (such as using the term "Marxian" instead of "Marxist"), but grew in intensity until he was ranting against Roosevelt, Great Britain, the League of Nations, "international bankers", Communist influence in America, the Jews, and anyone else he decided to rant about that day. Far too many of today's radio hosts like Michael Savage seem to have borrowed their style from Coughlin.

Coughlin was praised by Issa Nakhleh[2], the Holocaust denier at least since Nov. 14 1972[3] and who attended IHR Holocaust Denial 1981 convention of neo-nazis seeking a "white army".[4]