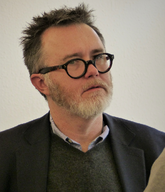 Rod Dreher is an American Conservative Christian and homophobe[2] who opposes equal rights for LGBT people and dislikes African people.[1][3][4] He is senior editor and a blogger at The American Conservative. Dreher describes himself as a "Righty journalist, Orthodox Christian, Southerner, Europhile, Ignatian (Team Reilly), eclecticist."[5]

Dreher believes that Christians must be granted the right to discriminate against LGBT people whenever their religion demands it. He is author of the book The Benedict Option, arguing anti-LGBT Christians should withdraw into cult-like isolation modelled on a medieval Benedictine monastery, where they are free to indoctrinate their children in peace.[6]

In 2018, Dreher attracted widespread criticism for his defense of Donald Trump's offensive comments regarding African countries as "shitholes".[4][7][8]

Dreher calls African people “barbarians” but insists that isn’t racist because it is a “perfectly just” description.[3] Dreher took an African-American professor’s remarks out of context, stirring up a racist mob against him in the process.[9]

Dreher supports TERFs, and defends the right of Christians to discriminate against transgender people.[10]

Dreher is a fan of the right-wing Quillette magazine. In March 2020, Dreher wrote an article supporting "race realist" Bo Winegard who was fired from Marietta College.[11]

Dreher's exact position on evolution is hard to pin down. He believes that the Christian God created the world but says he does not personally believe in young earth creationism. Although he disagrees with the YEC position he has defended creationists saying "I admire their bullheadedness" and has written articles supporting them.[12][13]

To his credit, Dreher is not a Biblical literalist but he does cherry-pick what bits he wants to believe from the Bible. He has written that "there may not have been a literal garden of Eden, but at some point there was a metaphysical and spiritual event called the Fall."[14]

Dreher has never written that he accepts the evidence for common descent. Until 2011 he worked for the Templeton Foundation which supports theistic evolution.[15][16]

P. Z. Myers has commented that Dreher is “totally ignorant of science”.[17] Dreher has also drawn criticism from Jerry Coyne.[18]