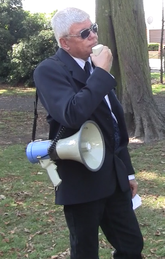 Jim Saleam: whiter than thou, annoying people in the park.

Saleam cofounded the National Action group in the 1980s after being a member of the short-lived Australian National Socialist Party in the 1970s. National Action's existence was also short lived due to many acts of violence by its members, including a shotgun attack organised by Saleam on African National Congress representative Eddie Funde in 1989. Saleam was convicted of his role and served a prison sentence for his crime, despite pleading not guilty.[2] Saleam has also maintained his innocence for the last two and a half decades since committing the offence.

Upon his release from jail, Saleam earned a Ph.D. at Sydney University; his doctoral thesis being on the growth of Australia's populist far right.

Saleam joined the Patriotic Youth League in the 1990s and acted as a mentor to up-and-coming right wing activists. He joined the Australia First Party in 2002 and acted as secretary, before establishing a separate New South Wales branch of the organisation in 2007, which he has continued to lead.

Saleam is highly critical of multiculturalism and despite being of Lebanese descent, he believes that non-white immigration to Australia must be halted to prevent racial genocide. To no one's surprise, he also adheres to the idea that anti-racism is a code for anti-white.

Despite denying ever being a Neo-Nazi, images have emerged of Saleam in his youth wearing Nazi attire in public, and recently, footage emerged of him attending a Neo-Nazi meeting where he saluted an image of Colonel Gadaffi, which earned the annoyance of fellow Australian right wing loon Nick Folkes[3]. Folkes, an ardent Zionist, has argued that Saleam is not a real patriot because of his Nazi links, and has even gone to the extent of accusing Saleam of supporting anarchist groups he so dearly claims to oppose.

Saleam also strongly opposes Islam and is a follower of the Reclaim Australia and United Patriots Front (UPF) movements, attending rallies of theirs in 2015. In early 2015, Saleam was interviewed by then UPF member and fellow Neo-Nazi Neil Erikson on how the Australian right can overcome Islam and the left, whom both see as conspiring together to destroy the Australian state.[4]