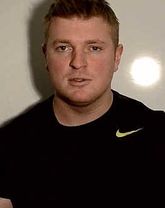 Bruce[1] Blair Cottrell (fl. 2012- ) is an Australian far-right extremist and open neo-nazi. He was the leader of two now defunct far-right political action groups in Australia, the National Democratic Party (NDP) and the United Patriots Front, which he formed along with Shermon "The Great Aussie Patriot" Burgess. After Burgess's departure from the UPF in October 2015 he granted Cottrell full control of the organisation. From late 2015 to 2016, Cottrel operated as the self-appointed Chairman of the United Patriots Front's political party, Fortitude.

Cottrell first gained exposure due to his presence both online and at public rallies, where openly denounced the left and promoted New-World-Order conspiracies and nationalism. He also criticised radical Islam.

Cottrell's now removed YouTube channel featured his rants about how the left are seeking to destroy Australian society. He adheres to New World Order conspiracies (while ridiculing and accusing leftists of conspiratorial beliefs) and has argued that leftists are a product of the global elite who wish to destroy all forms of nationalism, tradition and Christianity so that a one world socialist government can be created. This elite will ultimately destroy the hipster left once they've served their purpose in undermining nationalism and contributing to the creation of the N.W.O[2]. The global elite primarily use public schooling and the media in this indoctrination process.

Cottrell has also argued that anti-racist and anti-sexist activism are false causes and only serve the elite[3], who use multiculturalism, multi-racialism and diversity to further their destructive anti-nationalist agenda. He believes that equality is an unnatural concept, and that all great civilisations which collapsed throughout history, did so because they sought to create a more egalitarian society. Cottrell is also highly critical of Islam, and has accused the godless left of supporting the ideology, simply because both supposedly share a hatred of the "white race" and the West.

In late 2015, Cottrell announced that the UPF would be morphing into a political party, Fortitude, and that this new party would establish in 2016. Fortitude barely lasted a few months; failing to reach the necessary 500 members to be registered as an official party.

Cottrell is (it shouldn't surprise by now) a self confessed Neo-Nazi who stated that Mein Kampf should be distributed to all students in state schools, and that images of Adolf Hitler should be erected in all said institutions.[4]

He has also stated that women are incapable of being in positions of leadership, because it is unnatural[5]. According to Cottrell, situations where women are appointed as leaders are always disastrous, and that the end result is the transformation of the young males of into "effeminate little bitches" who ultimately lose their sanity. Cottrell believes that modern feminism is a conspiracy funded by Jewish elites, to take away men's right to use force, which according to him, is the only human right in existence[6]. This is hilarious considering that Cottrell's hatred of leftists and Muslims is rooted in part due to their tendency, in his view, to use force and violence to put forth their rhetoric.

Cottrell is also a raging homophobe, supporting claims that it is "unnatural" and a disease[7]

Cottrell is a convicted arsonist, and also has criminal convictions in regard to burglary, testosterone smuggling and breaching intervention orders [8]. He served a brief time in prison for these offences.

In 2017, Blair Cottrell made history for being the first ever Australian to be convicted for hate speech offences; receiving a criminal conviction for inciting the contempt and ridicule of Muslims over a skit committed in 2015 by himself and other members of the UPF, where they beheaded a dummy whilst impersonating Muslim radicals. Cottrell and the other men involved each received a $2,000 fine, which Cottrell later sought to appeal[9], and in December 2019, lost that appeal[10].

In 2018, the repulsive Cottrell was interviewed by Sky News and later joked about raping the female journalist who had conducted the interview, after he had been informed that his interview had been deleted and that he was banned from ever coming onto the show again[11].

In the aftermath of the 2019 Christchurch terrorist attacks at Al Noor Mosque and Linweood Islamic Centre in Christchurch, New Zealand, it was revealed that the terrorist responsible for the massacre, Australia-born Brenton Harrison Tarrant was a fan of Cottrell and the United Patriots Front, referring to Cottrell on numerous occasions online as "Emperor Blair Cottrell" and donated to his organization in 2016. Cottrell distanced himself from Tarrant, claiming he didn't know him personally and denounced his violent acts.[12] Follwing this, Cottrell was permanently banned from Facebook and moved his operations to Gab, a social media platform used primarily by far-right leaning individuals with severe delusions and persecution complexes including Robert Bowers the perpetrator of the Pittsburgh synagogue shooting at the Tree of Life - Or L'Simcha Congregation in Pittsburgh, Pennsylvania, United States. We're sure the vile Cottrell will fit in just fine.