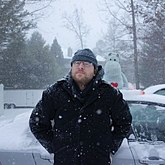 John Fuerst aka Gerard Fuerst (online alias: Chuck) is a HBD pseudoscientist, anti-Semite and white nationalist who publishes racist pseudoscience in the far-right Mankind Quarterly and OpenPsych pseudojournals. He's obsessed with racialism and pretty much only talks about that single topic, dedicating whole blogs to fixate on "racial differences" e.g. Human Varieties,[2] Occidental Ascent[3] and Race, Genes and Disparity.[4] In 2015, he published a book (over 100 pages) The Nature of Race: the Genealogy of the Concept and the Biological Construct’s Contemporaneous Utility arguing for the existence of biological human races against the scientific consensus they don't exist.

Fuerst is a "research fellow" at Bryan J. Pesta's lab at Cleveland State University and the white supremacist Ulster Institute for Social Research.[5][6] From 2019, Fuerst was publishing under the name John G.R. Fuerst but in 2021 dropped his first name and submitted a manuscript as Gerard R. Fuerst.[7] This is likely to do with the fact searching "John Fuerst" on Google produces this page that exposes his anti-Semitism and racist views. 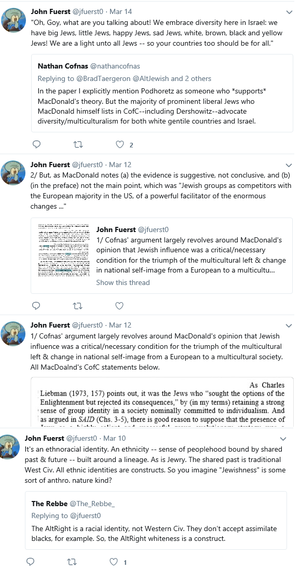 CharlesMartel: Whites are used to being attacked as a group. Why are jews so fragile?
Alex_Goldberger: Whites are justifiably attacked for doing shitty things throughout the entirety of recorded history. Not for being white, but because of how their “white” status was/is abused in society.
If that’s the same thing as being “anti-white”.....I can’t even entertain that hypothetical
FreeNortherner: Your hypocrisy is astounding.
Fuerst: @CharIesMartel @FreeNortherner I agree with @Alex_Goldberger. We should hate Jews no more than they deserve for how Jewish status has been abused throughout history to accrue privilege. (e.g., usures, soviet lackies, police dogs for the globalists) Same rules as for Whites.[8]
Fuerst: @CharIesMartel @FreeNortherner @Alex_Goldberger Of course, I would tend to say that hatreds based on ancestors' deeds are not deserved -- but granting @Alex_Goldberger 's dictum, which seems to have more than a little currency, we should apply as consistent as possible.[9]

If you simply point out the fact Fuerst is a racist and anti-Semite with alt-right/white nationalist political views, by quoting his own internet posts, he is known to harass you by repeating his favourite word "defamation" and making bogus legal threats in an attempt to silence people (such as the writers of this article) who have merely documented his internet postings. Presumably, the reason Fuerst doesn't want to be described as a racist, alt-righter, or white nationalist is that he's trying to make a name of himself as a "scientist" and he realises no one will take him seriously if they know his far-right political biases; for this reason, he is deeply unhappy about the top Google-search rank of this article by searching his name that exposes his agenda:

The evidence Fuerst is an anti-Semite, racist and white nationalist stems from Facebook comments he wrote which reveal he thinks a group composed mainly of Jews are behind "massive non-white immigration" to US, that an Israeli lobby controls the Republican Party who are "moral signalling" against "white Christian" America, but that Trump is a not a part of the "Jewish Coalition" and is a patriot (Fuerst says he voted for and supports Trump):

The founders of "neoconservatism" were primarily jewish leftists who felt that the democratic party was not sufficiently supportive of Israel as an ethno-nationalist state. The jewish element explains why they are utterly hostile to all forms of populism and nationalism except in the case of Israel. Trump is dangerous to them because he is a genuine American patriot, one who isn't indebted to Republican Jewish Coalition/Israel lobby... neoconservatives: wars for Jewish nationalism (Israel) while a war against a coherent American nation, tax cuts for mostly progressive billionaires while open borders to keep wages down, dog whistling to while moral signaling against a mostly White Christian base. IMO, the party deserves to be destroyed.[11]

Going to early vote for Trump now. Will see if I can do it multiple times.[11]

Fuerst also describes the anti-Semitic article "Jewish Hypocrisy" from Neo-Nazi website Counter-Currents as "excellent" (though he would prefer it with qualifiers like "a disproportionate number of") and quotes the following:

Jews are, of course, deeply hypocritical in their political behavior. A Jew who advocates open borders for Western nations while supporting the preservation of a Jewish state in Israel is clearly guilty of failing to practice what he preaches. Since the vast majority of Diaspora Jews and all major Jewish organizations both support Israel as an apartheid ethnostate and also favor the dissolution of their host nations through massive non-White immigration, we can justly call Jews a hypocritical race on this important subject.[12]

http://www.unz.com/isteve/okay/#comment-1285716 This is L. Auster's "First Corrolary to the First Law of Majority-Minority relations in a Liberal Society" in action: "The more egregiously any non-Western or non-white group behaves, the more evil whites are made to appear for noticing and drawing rational conclusions about that group’s bad behavior." Police in Germany must now crack down on those who notice and complain about the misbehaving invaders.[11]

Furthermore, Fuerst argues "blacks are cognitively less apt" and seems to be an apologist for colonialism:

Because Blacks are cognitively less apt, colonialism was a net good; it jump started African societal development. As for cognitive tests, whether they are predicatively biased or not is an empirical question. The issue of predictive bias is distinct from that of whether scores differences have the same meaning within and between groups. For example, cognitive tests are about as predictive of job performance for first generation Hispanics as for third generation (non-Hispanic) Whites. I can guarantee, though, that the first generation Hispanic/ third generation Whites gap is partially due to linguistic bias. Separate issues. Causation is yet another.[13]

He also uses alt-right glossary terms such as "cuck", argues conservatives should outbreed liberals and is a fan of the alt-righter Stefan Molyneux:

This of course is ignoring the fact that there are plenty of liberals whose parents were/are conservative, and vice versa.

The Nature of Race[edit]

In his paper The Nature of Race: the Genealogy of the Concept and the Biological Construct’s Contemporaneous Utility (2015) (published in Open Behavior Genetics, one of the OpenPsych pseudojournals), Fuerst argues for the utility of race as a categorization when applied to humans but says he is agnostic or non-committal concerning things such as behaviour and IQ, writing, "the case for average congenital biological racial differences in intelligence or other behavioral traits... the issue is presently undetermined."[14] He, therefore, says he is arguing for a so-called thin version of racialism, as opposed to hereditarianism. In his view, his ideas about race are moderate since he doesn't propose any form of racial hierarchy or racism. However, there are a number of problems with taking Fuerst seriously about this:

Fuerst's The Nature of Race is promoted on Stormfront as "mandatory reading".

Fuerst's thin racialism is a motte and bailey strategy: in his published work, Fuerst presents and defends a more moderate (but still scientifically invalid) position on race (the motte), while his underlying racist view is a lot more unreasonable and less-defensible (the bailey). Fuerst's bait and switch method is not a new tactic by HBD bloggers. For example, euphemisms are often adopted such as "race realism" by white nationalists and Fuerst similarly tries to present himself as being 'merely interested in human biodiversity' (hence his blog-title "Human Varieties").

After his anti-Semitic and racist comments were exposed, Fuerst is much less active on Facebook and Twitter. In March 2019, Fuerst published a pseudoscientific racialist paper with Emil Kirkegaard and Richard Lynn in the open access Psych journal.[28][29]

In 2020, Fuerst reappeared on a new Twitter account @FuerstJgr, but quickly deleted it; extant discussions show he was primarily tweeting about race.[30] Curiously, he seems to have had a falling out with his colleague Emil Kirkegaard.[31] Kirkegaard had criticised him for making a tweet too anti-Semitic for even his taste:

In October 2021, Fuerst complained on Twitter (now posting under the account name "Human Varieties") that MDPI rejected a manuscript he submitted because of political correctness.Do You Believe That? He then proceeded to post a bizarre anti-Semitic rant: