From RationalWiki
(Redirected from Mikemikev)
Jump to: navigation, search

He is the former co-founder and administrator of the alt-right conspiracy theory website Rightpedia and an ex-sysop on Metapedia; however, in November 2018 Rightpedia was shut down by their web-hosting provider for obscene imagery of child abuse.[7] Coombs had uploaded photos of dead children including mutilated babies; disturbingly he has also posted he supports child murder. His main online pseudonym is Mikemikev, but since he's been banned from Twitter,[8] Wikipedia,[9] RationalWiki,[10] and dozens of other websites, he now creates countless sockpuppets using different names.[note 2] Most disturbingly, as a poster on the neo-Nazi Daily Stormer, Coombs said that he is "sad that not advocating violence has to be the official position of this site"[12] and has argued, in the ultimate "kill those who disagree" moment, that the killing of Jo Cox was justified due to her pro-immigration politics.[13]

The Southern Poverty Law Center has described Mikemikev as a white nationalist sockpuppeteer for his creation of hundreds of accounts on Wikipedia to vandalise articles and post anti-Semitism.[14] Coombs is a supporter of the anti-Muslim party For Britain and the far-right British National Party.[note 3]

In April 2018, an investigation into anti-Semitism on Twitter, found Mikemikev to be one "of the most active hard-line British anti-Semites".[15] Shortly afterwards @Mikemikev was permanently suspended for hate-speech, but he has returned there on sockpuppets, such as @Antifungal16, and R2D279247959, as of August 2020, JohnnyR84030075,thinderstruck2 and most recently Felicit52636930.[16][17] Banned on nearly all social media, Coombs posts on Gab,[18] a freedom of speech website popular with the alt-right, although even they have had to censor and delete some of his comments that broke their rules, including postings threats of violence.

In January 2019, Coombs was permanently suspended from Encyclopædia Dramatica forum for threatening to murder other users.[19] Aside from making death threats and his deranged racist online behaviour, he has gained notoriety for his controversial views on paedophilia such as writing he's sexually attracted to "underage girls" as young as 14 or 15 and that he considers this somehow "normal for men". This has led him to be a divisive figure among the far-right and some websites that share his own neo-Nazi and white nationalism politics have banned him for being a paedophilia-apologist. 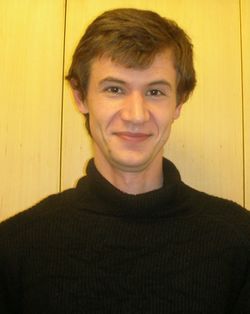 Coombs uploaded his CV online, including his personal details:[27]

I am a British man aged 37 based in London. I have a BA in AI (Sussex) where I worked on Japanese/English automatic translation and took an MA (UCL) in translation. I worked in Korea for 4 years, including checking translations for Samsung with SDL Translation company, and private tutoring English, where I helped students succeed with IELTS and enter British universities. I can teach one-to-one or groups, for the low price of only £10 per hour. The low price reflects my pleasure in teaching, rather than low quality. I have a wide range of the best current teaching materials, books and audio, we can use. michaelcoombs2000@gmail.com[28]

Coombs has said he disliked China, based on bad accommodation he received at a Chinese university:

Michael Coombs, an English teacher from the UK who was employed by the university, was disappointed to find that he was not given the three room apartment with all facilities he was promised. Instead, he was placed in foreign students accommodation. Living conditions included: One room; No hot water until 18:00; Absolutely no guests allowed except from 16:00 until 22:00, and then only two guests maximum; Main doors locked at 11:00 with no exit/entrance for residents until 06:00, any attempt met with abuse by the night watchman; A small kitchen shared with many students, from which food was consistently stolen; Improperly fitted windows and doors resulting in coldness and mosquitoes. He was told throughout the four months he was there that he would moved to the three room apartment with all facilities soon. Eventually he resigned.[29]

As of 2018, Coombs advertises himself on Japan Free Classifieds as a online English language tutor to Japanese students charging £14 for a session over Skype:

Professional English Tutor. 6 years experience. Online lessons through LINE or Skype. All styles of tuition, beginner to advanced, textbook or discussion. First lesson free to try. Contact me by email to discuss a plan.

Arguably Mikemikev lives a double life, since his former employers and Japanese students he charges tuition fees have no idea about his internet activities nor his neo-Nazi views. A member of Kiwi Farms contacted a Korean woman named Ellasy Lee, who had met Coombs in London and discovered he does not mention or promote his racist and white supremacist views off the internet in the real world; Lee describes him as an extremely shy individual and was shocked to learn of his extremist political beliefs:

Note Mikemikev now trying to distance himself from his posts, and claiming they are satire. Like I said he's a phony. "Ella" also confirmed Mikemikev mentioned nothing to her about his racial views in real life, and she is shocked to discover what he has been posting online. In other words, Mikemikev as a white supremacist is an internet persona. He mentions nothing about it in the real world. It's a keyboard fantasy world for him.[31]

Since Coombs studied AI, one could posit that Mikemikev is actually a failed AI experiment run amok; even if true though, it wouldn't make Coombs any less rotten of a person.

The Science of The Young Ones: Priming

In September 2010, Mikemikev then 32 years old appeared on the BBC documentary The Science of The Young Ones and took part in a psychology experiment, a replication of Bargh, Chen & Burrows' (1996) motor priming. The experiment is on YouTube; Michael is introduced in the video after 2 minutes.[32] 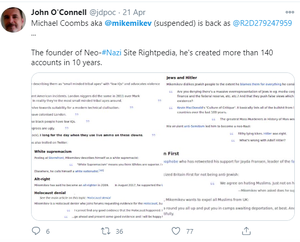 Below documents his deranged and extreme beliefs:

Coombs hates black people and sits on the internet posting his racist thoughts about them all day:

No it isn't you retarded subhuman nigger. It's merely noticing that niggers are cancerous jungletrash that wreck everywhere they go like fucking locusts. How about this: name one majority nigger city or nation that is a nice place that people want to go to. It doesn't exist, and it never will because niggers are incapable of civilization. This is what you are referring to. No white person thinks they 'invented' civilization, only that shadow shitskins such as yourself are literally destroying ours. Stay mad tho, your niggerkike tears are actually an accomplishment I can claim and I have caused an ocean already without a sign of slowing down. Fuck your pathetic bait thread as well, no bump for you.[40]

I've been in the middle of these Congoid protests in London, talking to the protesters. They do have a brutal colonial history. The Belgians armed the most savage among them to force rubber collection. I'm really not sure how much influenece Western corporations have now. Much as I believe that the average African is not suitable for Western civilization, I do not support pushing these people any further down than they already are for the benefit of the West. So yeah, no support for Congoids right to live in London, but at the same time agreeing that maybe they are getting some **** from the international corporations. Anyone know about it?[48] 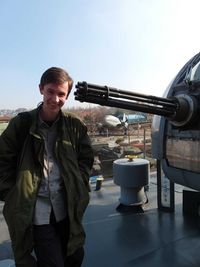 Michael Coombs, standing before his admirers

When asked who he thinks were responsible for the 9/11 terrorist attacks:

In December 2010, Mikemikev was permanently blocked from Wikipedia[94] and after his ban created hundreds of sockpuppets; 143 blocked based on behavioural evidence and 120 by technical (IP) evidence,[95] and now has his own long-term abuse case page

. Coombs later created an anti-Semitic thread on Stormfront inviting white nationalists to vandalise Wikipedia with him:

Wikipedia is the top result on Google and the first source of information for many. Race related articles are policed heavily by Jewish users, to maintain conformance to the Gould/Lewontin position that race has no biological validity. This is actually not the mainstream position in academia, although Jewish media would have people believe it.

I have been banned from Wikipedia by Arbcom, the highest dispute resolution body, as user "mikemikev" on spurious conduct charges after a long conflict on Race and Intelligence. A sockpuppet of mine, QuintupleTwist, was also recently banned from Race (classification of humans), for being mine.

Note that my civility, logic and academic sourcing was of a far higher standard than my Jewish opponents. They operate as a team, MO involves constant misrepresentation of sources, cherry picking sources that match their POV, demonizing sources and users they don't like.

Arbcom is also influenced by Jews.

I would encourage members to visit these sites in some spare time, familiarise yourself with the discussion on the discussion pages, and get stuck in.[96]

In 2017, Wikipedia admin Doug Weller complained that Mikemikev had been attacking him off-site.[97]

Mikemikev was an admin on the far-right wiki Metapedia, but was banned there in 2014 for causing a flame war about the forum Stumble Inn that had also banned him:[98]

Mikemikev is nothing more than a drunken trouble causer. There is a reason why he get's[sic] banned from everywhere and there's a reason why I came back after 4 years to do so. Creating a article on a webforum who's[sic] members are primarily of English decent and National Socialists, slandering them is considered quality material on here? I asked Mike if he was going to re-write the article, and he didn't, so it got deleted.[99]

Sometime after getting booted from Metapedia, Mikemikev joined Rightpedia and was made an admin where he used to post anti-Semitic and racist content before the site's deletion.

Mikemikev is definitely a fan of RationalWiki, and showed his love and admiration for us by posting racism, Holocaust denial and attacking other editors, He has been banned from editing since 2014 (Special:Contributions/Mikemikev). He often claims this article that documents his online racism and batshit crazy behaviour is somehow "slander".

Similar to Wikipedia, Mikemikev has been blocked at RationalWiki on hundreds of sockpuppets that he still makes daily.

In 2016, Stormfront put Mikemikev's account on moderation, restricting his posting abilities, after they discovered he once had a South Korean girlfriend:

However, he describes his former mixed-race relationship as a "past crime" and that he now wouldn't date outside his race: 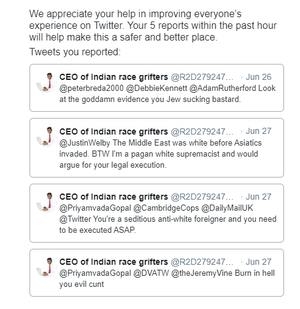 Screenshot of Mikemikev tweeting he wants to execute people and anti-Semitism, his account was suspended for harassment.

Coombs returned to Twitter in 2020 to post death threats, as well as racism and abuse to Nick Lowles, Hope not Hate and Dr. Adam Rutherford

The account was suspended and Coombs created another, named thinderstruck2 on 21 August.[109][110] Coombs owns yet another account with over 1000 anti-Semitic tweets[111] with a similar name, Thunderstruck[112]:

Coombs's Twitter accounts are easy to identify: he follows the same accounts including BNP Bexley, Kevin MacDonald, Ann Coulter and Bo Winegard; furthermore, his new accounts are usually registered within days of his older accounts being suspended. He is also identifiable based on behavior patterns. For example, on thinderstruck2, Coombs has continued to post he wants to execute people.[114] He also follows his alternative accounts, Thunderstruck for example follows thinderstruck2 (and vice-versa).

In 2020 Coombs become a supporter of the far-right group Patriotic Alternative.

In January and February 2021 Coombs was reported to the Metropolitan Police by the academic Adam Rutherford. Coombs harassed him on Twitter on multiple accounts as well as disrupting his livestreams. Coombs has also impersonated Rutherford on RationalWiki using his name on fake accounts (Special:Contributions/Adam Rutherford). One of the Twitter accounts that Coombs abused Rutherford on is @Felicit52636930. After he realised he was reported to police for malicious communications, Coombs, fearful of the legal consequences, began to lie that he didn't own the account despite it conclusively being proven he did. He has since abandoned the account.[116]