From RationalWiki
(Redirected from Paradolia)
Jump to: navigation, search 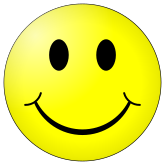 It's not actually a face of any kind — just a yellow circle, two dark ellipses and some curved lines. Your brain does the rest, superimposing its "logic" on the world around it. Really think about that for a moment.

Pareidolia is the phenomenon of recognizing patterns, shapes, and familiar objects in a vague and sometimes random stimulus. It's the result of your brain trying to "make sense" of input that really has no sense to find in it. This is seen often in inkblot tests, where random splatters of ink suggest different images to different people (look, it's a conspiracy: they're all deliberately made to look like vaginas!) but also in cases of people seeing visions, ghosts, and other likenesses in what are actually just random patterns that happen to look like those things. It's part of the recurring discussion of representation in art (see The Treachery of Images

) and is a fundamental component to understanding the philosophy behind modern art.

Some people think that pareidolia is a side-effect of the human brain needing to very quickly recognise certain objects such as human faces or bodies — a form of Bayesian inference where we have more experience with actual objects than with random patterns that just look like those objects. For example, the shapes composing a face are more likely to correspond to a face than random patterns, so random patterns that are close to faces are interpreted actually as faces as the brain mistakes them for the real thing. Since humans are highly social and many of our interactions rely on very quickly gauging other people's moods by tiny hints in their facial expressions, most people are acutely receptive to such patterns. The emotions people can read from faces can also be exploited this way. Clock faces in clock-makers' shops will permanently show "ten past ten" because this is a happy face, and never "twenty past eight" - because this is a sad face. Meanwhile, designers have to be careful just in case what they've made accidentally resembles something else - such as when Nike had to withdraw a new design because people thought it looked too much like the word 'Allah' written in Arabic script — we know what shit that can cause.[1]

Faces are probably the most common form seen as an effect of pareidolia. Facial recognition occurs in a part of the brain known as the fusiform gyrus.[2] Subjects shown unclear, fuzzy pictures and told beforehand that they will see a face show activation in the fusiform gyrus and report seeing a face even where there is none.[3] Certain drugs and brain-injuries will completely rob you of this ability, and prosopagnosia, also known as "face blindness", is a neurological condition that prevents people from recognizing faces. Prosopagnosia also interferes with memory and has been a key condition when researching human-face recognition. Once thought to be extremely rare, this condition may occur in as much as 2% of the world's population.

...and when you see it, you'll shit marble bricks.

Although pareidolia is most interesting when religious people see Jesus in a cheese toasty, there are numerous secular examples:

Consider the theorem named after Thomas Bayes in the mid 18th century. It allows us to successfully compute the likelihood that a particular hypothesis is true given certain amounts of evidence and a few other probabilities. It doesn't even require hard maths or precise numbers to calculate whether we will determine something to be of "high" or "low" probability. Firstly, the explanation of the terms (fuller explanations of the why and how can be found elsewhere) and what they mean in this case. As always, the piped probabilities like

are read as "probability of A, given B," or the probability that our hypothesis (A) is true given some evidence (B).

quite high. Our brain does this calculation and thinks "this is a face-like arrangement of features, the odds of it being due to chance are low enough to discount so let's assume it really is a face." Pareidolia and psychological phenomena like it all hinge on

, the probability of encountering a random arrangement of features to form a face. Or more specifically, because

is near certain, it is the ratio between

— how common a real face is to us (because of social interaction) compared to random noise forming a face — that dominates the result. We perceive

to be low compared to the others and conclude that we're seeing a face where there isn't one. Yes, the odds of a face randomly appearing in noise is very small, and we would be right to assume so. But the sheer amount of noise ensures that a face-like structure will appear at some point, and when it does we think it is an actual face and register it as such.