From RationalWiki
(Redirected from Pokemon)
Jump to navigation Jump to search 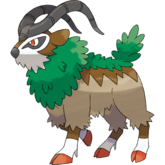 Gogoat: A great Pokémon, or the greatest Pokémon?

Pokémon (often simplified to Pokemon when typing the accent is inconvenient; frequently mispronounced as "Po-KEE-mon", "Po-KUH-mon", or worse, "Po-kee-MAN") is one of the most successful and popular Japanese media franchises in the world, featuring cute (or sometimes ugly) creatures beating the crap out of each other to the point of being knocked unconscious. It started in 1996 with the first set of video games, developed by Game Freak

and published (and later translated) by Nintendo

for the latter's Game Boy portable gaming console (though the games didn't get an English-language release until 1998); it has grown to include many games, manga, movies, and an anime series which has been running for 15 years and counting. One equally long-lived manga series, Pokémon Adventures, includes multiple volumes based on every non-spinoff video game in the series. (There are other manga series, but they tend to feature plots focused on specific video games — such as Diamond, Pearl, and Platinum in Pokémon Diamond and Pearl Adventure!'s case — rather than on all of them as with Adventures.)

One anime episode resulted in several hundred children having seizures, and another showed a man inflating fake breasts in order to win a swimsuit competition. Sadly, it took until Pokémon #638 until the designers finally recognized the error of their previous ways and based one of the glorious creatures on a goat — Cobalion.[1][2] And again in Generation VI, they gave us a true, Grass-type, non-legendary goat simply called Gogoat.

Being an international phenomenon, a lot of these are colored by the cultural lenses from the parties plus ignorance of Japanese culture. It's a good study on how cultural differences aren't apparent until these sorts of things crop up.

Unlike other media hysteria, this one is founded on a grain of legitimate concern, though it was still massively overblown. There is one episode

of Pokémon: The Series that can seriously be hazardous to your health. "Dennō Senshi Porygon" featured explosions in which the entire screen alternated very quickly between red and blue. On December 16, 1997, when it was aired on Japanese television, 685 people were sent to the hospital.[3] This was dubbed "Pokémon Shock" and caused hysteria, resulting in some guidelines being put in place for the use of flickering images in animated cartoons. The episode itself has been altered to use less harsh flashing lights. One lesser-known casualty is that Porygon and its evolutionary family members, despite not being responsible for the violent flashes, aside from extremely minor cameos, have not since appeared in any newer episodes of the series. In a later follow-up, researchers determined only a small fraction were diagnosed with photosensitive epilepsy.[4]

Some Christian fundamentalists have stirred up a Satanic panic claiming the series promotes witchcraft, occultry, and claims of blasphemy.[5][6][7][8][9][10] In particular, they've latched onto the fact that the franchise features Pokémon "evolution," concluding that the series promotes the theory of evolution[8] despite the fact that the concept of "evolution" in Pokémon is completely different from the actual theory[11] and more closely resembles stages in the normal growth of an organism — most notably insect metamorphosis (the creator of Pokémon, Satoshi Tajiri,

had a fondness of insects when he was a kid and collected them as a hobby; the aspect of catching wild Pokémon in the games was intended to allow people in more urbanized areas to have what is essentially a virtual version of his hobby). Despite such moral panics, the Vatican has so far found Pokémon to be highly acceptable,[12] although the existence of Lord Helix may temper that in the future.[13]

Actually there's a very similar game series with Satanism and occultism in it, it's called Shin Megami Tensei, but no one bats an eye for these. Probably because it wasn't exported from Japan for a long time and the first game released in North America was a spin-off action game for Nintendo's failed Virtual Boy system called Jack Bros. Additionally, the series is marketed for a much more mature audience, with many games not recommended for those under 16. Also, the newer games are much lighter and softer (e.g. the Persona series) than the older ones, with a few notorious exceptions having been released lately for the handheld Nintendo 3DS (Namely the Devil Survivor series, Soul Hackers, Shin Megami Tensei IV, and Shin Megami Tensei IV: Apocalypse, the last of which actually pissed off some people... but those were Hindus [14]).

It happens that in 2001, Saudi Arabia banned the Pokémon franchise completely, claiming that the series defames the name of Muhammad promotes Zionism.[15][16] Some fundamentalist Muslims also claimed "Pokémon" means "I am Jewish," showing complete ignorance of the fact that the series originated from Japan (and that "Pokémon" is a contraction of "Pocket Monsters" — Poketto Monsutā — when written in Japanese). Why the Saudi government still allows games such as Yu-Gi-Oh, a card game which has actual Jewish references,[17] remains a mystery for the ages.

The Pokémon Jynx's design and appearance has been heavily criticized by cultural critic Carole Boston Weatherford, who described Jynx as representing blackface after seeing the character's depiction in the anime.[18] Due to complaints, Gamefreak modified her appearance and now depict Jynx with purple skin instead of black, though criticisms from 1UP.com and similar sources have persisted. Jynx was likely inspired by ganguro, a Japanese fashion where women tan heavily, bleach their hair, and apply large amounts of makeup, instead of a black stereotype.[19]

For some reason, PETA has had no issue over a game where wild creatures are captured and forced to battle.[note 1] They then released a "parody" game on the day of release of Black 2 and White 2, proving again that they don't do any research.[note 2][20] When Pokémon X and Pokémon Y were released, PETA released another abomination parody game named Pokémon Red, White and Blue that tries to connect Nintendo to McCruel McDonald's and mocks dual-version release and the idea of a third version for Dialga knows why.

Slavoj Žižek considered Hitler to be the greatest Pokémon Go player of all time,[22] which is not really surprising considering that Slavoj Žižek is a raving loon.

June 2019 saw a rather heated controversy arise over one Japanese artist's depiction of the new Pokémon character Nessa with slightly lighter skin than she actually is depicted as. A few overreactions in response on Twitter caused artists to take matters into their own hands by depicting Nessa either as straight-up white or pitch-black, culminating with one artist's drawing of her as a monkey.[citation needed]

See the main article on this topic: Loot box

Like many other video games, Pokémon has jumped straight into this controversy. Pokémon Go's eggs have been criticized for basically being loot boxes.[23] Pokémon Unite, which was developed by Tencent

(a huge controversy in and of itself due to the company's connections to the Chinese government) has been criticized for its pay-to-win mechanics[24] and also contains gacha mechanics (basically lootboxes) as do a number of other Pokémon mobile games.[25][26] The problems with including these gambling mechanics in games aimed at children and that are also very popular among neurodivergent people who are particularly susceptible to lootboxes[27] have not gone unnoticed.

In 2011, long after most people other than PETA had stopped complaining about the series, Republican Presidential hopeful Herman Cain killed his chances of being president (again) by quoting the theme song from the second Pokémon movie in a speech, referring to the writer for said line as "a poet".[32][note 4] Some analysts have noted that the decision might not have been as bold as many people thought; by then he had already lost most of his support, it was in fact his concession speech, and much like poor Kadabra he had already been accused of wearing the Number of the Beast.[33] Besides, Ronald Reagan lifted the phrases "evil empire" and "freedom fighters" straight out of the opening crawl of Star Wars...