Harry Potter, a series of seven (or so) fantasy novels by British author J.K. Rowling, relates the adventures of a teenage boy and of his two best friends who attend a school of "witchcraft and wizardry", learning a whole range of magical skills and fighting Dark Magic and evil, and demonstrates how Alan Rickman got snubbed of another Oscar.[4]

The series portrays Good triumphing over Evil. It became a literary and critical success; nevertheless, fundamentalist religious groups condemn it as a harmful work which will seduce children into the occult and witchcraft. In the United States (the so-called "great land of liberty") the books have become the most challenged of the 21st century.[5] Fortunately for Harry Potter fans, magic and witchcraft are only a concern if you're stuck in the 17th century or living in Africa or Indonesia or Papua New Guinea in the present century.

The response to the books represents an excellent example of modern-day fundamentalism and would-be authoritarianism, with numerous attempts to ban the books.

Scholars have subjected the Harry Potter novels to serious social scrutiny, with studies of the series' political intricacies performed by columnists, professors and doctoral students alike. As of 2007, the catalog of the Library of Congress has recorded 21 volumes of criticism and interpretation, and at least seven master's dissertations and 17 doctoral theses have been devoted to the Harry Potter books. Seriously.[6]

From the concepts of hierarchy and purity found in the relations between pure-blooded and muggle-born wizards to the struggle for House-Elf freedom, equality is a central theme of the books. It portrays dishonest and incompetent government and media and paints war as a great evil in which innocent people die. The school which Harry attends, Hogwarts, is multicultural, multiracial, and (seemingly) secular. Some critics have, however, called the books patronising and conservative,[7] or alternatively sexist and neoconservative[8]. This is odd, since 1. Rowling herself is a staunch Labour supporter (though is very critical of Jeremy Corbyn); and 2. Hermione.

Rowling also outed Dumbledore, one of the stories' most important characters, saying "I like to think of him as gay." Notably, she did so not in the text of the books, but during a PR event after the release of the final novel.[9] This must rank as one of the greatest achievements in having one's cake and eating it too, since Rowling gets credit for standing up for LGBT recognition without damaging her book sales or outraging her readership in a world where gay central characters are still a rarity in mainstream literature and taboo in children's fiction. She however seems to be at least sympathetic towards the TERF cause, though.[10][11]

Unrelated controversies include comparisons to some older book series such as the Howl's Moving Castle and Wizard's Hall (The Worst Witch is the most commented-on), which have resulted in accusations of plagiarism, or (far worse) being derivative. The works feature frumpy and disaster-prone protagonists, a couple of loyal best-friends (one book-smart and rational, one street-smart and slightly problematic), a blond and rich but cowardly and rather inefficient rival, a scary and seemingly unfair potions-teacher with hidden depths, a childish headmaster with a penchant for candy, and a big bad-guy who desires the destruction of the protagonist after their fateful first encounter. Whether this is more than just a re-hashing of tropes is a matter of debate.[12] Some fans, especially older ones, also believe that Rowling's later additions to the franchise are inferior to the original seven novels, with some outright comparing her work to that of George Lucas on the later Star Wars films,[13] though one could hardly throw a rock within geek culture without running into similar complaints regarding one particular franchise or another.

Rowling is a Christian herself. The final book, Harry Potter and the Deathly Hallows, contains an epigraph from the Gospels (Matthew 6:21), Harry's parents' gravestones display another Bible quote (1 Corinthians 15:26) and Rowling also has a scene where Harry sacrifices his own life and is resurrected and then proceeds to save everybody.[note 2]

One of the most understated parts of the books series is the portrayal of slavery and abolitionism. One of the main characters, Hermione Granger, seeks to abolish slavery and gets mocked for it. The enslaved group, the house elves, are portrayed as comical relief and themselves show hostility to the only slave who sought freedom.[14]

Another point of contention is the portrayal of lycanthropy as a possible AIDS metaphor, considering that the character Remus Lupin contracted the disease by being assaulted by an adult man when he was a child. Rowling attempted to retract this analogy or obfuscate, but the results were mixed.[15][16][17] 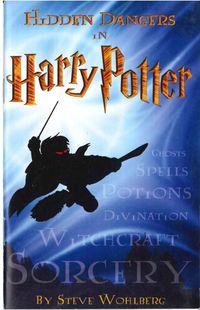 There have been dozens of legal cases concerning copyright infringement, libel and breach of contract involving the Potterworld. Flocks of religious leaders (plus Jack Chick) have fulminated against the series.

Note however that many moderate and some evangelical Christians have spoken out in favour of the books. While the Catholic Church has no official position, many Cardinals oppose the books. It seems that once people make the distinction between fiction and real belief in magic, they can see past any objections to demons and witchcraft to realise what the series actually supports.

Islamic fundamentalists have denounced the series. The Islamic preacher Sheik Feiz Muhammad regarded the books and films as "Satanic" and claimed they were introducing young children to pagan rituals (such as the drinking of goat's blood) which Islam forbids. The esteemed Sheik also criticized Muslim parents who allow their children to watch the films or read the books, claiming they were being irresponsible.[18]

Furthermore, the drinking of dead animal blood, Satanic human sacrifice, demonic possession etc. described in the quote at the top of the page, are actions practiced by the book's Wilhelm-screaming [19][note 3] antagonist, Lord Voldemort, the murderer of Harry's parents; the books do not exactly present Voldemort as a morally praiseworthy figure.[citation NOT needed]

As to the claims that the books promote witchcraft by teaching impressionable children to cast spells, well… we hate to break it to you, but the spells described in the books don't work in real life, even if you wave a piece of carved wood in the air.

Satirical-news source The Onion, in its inimitable style, once ran a spoof of the fundamentalists' claims, saying that children really were converting to Satanism because of the books.[20] As if to prove their own idiocy to anyone yet unconvinced, the fundies took the article as proof that they were right.[21]

Identify however you want but...[edit]

Since 2018, Rowling has been swirling in Twitter shenanigans. In March 2018, she had a "clumsy and middle-aged moment" — in the words of her representative, Rebecca Salt — when she liked an anti-trans tweet by @racybearhold that said "Men in dresses get brocialist solidarity I never had. That's misogyny!" Salt claimed afterwards, "this is not the first time [Rowling] has favourited by holding her phone incorrectly."[22]

In June 2019 — Pride month, no less — Rowling was revealed to be following nearly a dozen transphobic Twitter accounts. Twitter user @Persenche looked through the nearly 670 people Rowling followed and tweeted that 11 of them included Julie Bindel and Magdalen Berns, the latter of whom compared being trans to wearing blackface.[23] Six months later, Rowling tweeted in support of Maya Forstater, who claimed she was fired for her "gender critical views".[24] She then doubled down in June 2020, when she affirmed biological determinism.[25] Her views were condemned by her own characters the actors of her film series and her own fans.[26][27]

She also engaged in petty antics such as deleting a tweet praising Stephen King after he supported trans women[28] and participating in an open letter whinging about cancel culture with James Bennet, who resigned as opinion editor of The New York Times after printing an op-ed by Arkansas Senator Tom Cotton which called for Black Lives Matter protesters to be suppressed by the military.[29][30]

JK Rowling promoted a radfem store called "Wild Womyn Workshop" where they sell merchandise for "♀️women♀️" that help show whoever still supporting JK Rowling proclaim of how much of a cunt they are.[31] The products are "great, original designed products, carefully hand-crafted with care and love" featuring careless slogans carelessly mass-produced with carelessness and seething incomprehensible hatred like "Sorry about your dick bro" on a trans flag, "trans men are my sisters" on a trans flag, "f*ck your pronouns", "peak trans yet? (I can help)", "transition is conversion therapy", "trans ideology erases women", "dead men don't rape", and, unfortunately, more.

While praised for bringing queer representation with Dumbledore, Rowling's poor management of the character in the Fantastic Beasts prequels has been described as a betrayal[32][33] due to refusal to make the character explicitly gay on-screen.[34]

She also alienated a lot of fans for supporting the employment of actor Johnny Depp in the Fantastic Beasts films, despite allegations of domestic violence against him by his ex-wife Amber Heard (these allegations have been the subject of a lot of court cases without much clarity).[35]