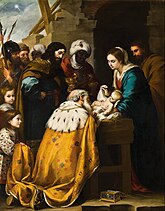 "Adoration of the Magi" by Bartolomé Esteban Murillo
If you're looking for the Swiss seasoning, instant soup and noodle brand Maggi

, you must be on the wrong wiki

How they viewed the human soul

The Magi are elements of the Jesus birth myth who appear in the gospel of Matthew. Magi were real historical people who followed Zoroastrianism and the English word "magic" derives from their rituals.

The Magi in the Bible myth[edit]

The Magi who visit Jesus only appear in the Gospel of Matthew, specifically Matthew 2:1-16. They do not appear in any of the other Gospels or books in the New Testament. The story goes that The Magi believed that a baby would be born soon that would be king of the Jews. They told this to King Herod I, aka Herod the Great (not to be confused with Herod Antipas, which is the King Herod that grown-up Jesus dealt with), who told the Magi to find this newborn king so he could worship Him.

The Magi saw a star in the sky hovering over Bethlehem and figured something important must be happening there, so they followed the star to the town and to the very house where Jesus was being born. They then gave them gifts.

The Magi were warned in a dream not to return to Herod, so they didn’t go back to him or tell him where they found the baby Jesus. Herod responded to this in a mature and reasonable fashion, by ordering all two year olds and younger in the town slaughtered.

Fortunately, an angel told Jesus’ dad to spirit himself, Jesus and Mary off to Egypt to escape this massacre. Unfortunately, the angel apparently didn’t give any of the other parents in Bethlehem a heads-up, as this resulted in what became known as the Massacre of the Innocents.

The Magi decided to give gifts to Joseph and Mary for their newborn, but instead of bringing useful stuff like diapers, bottles and baby formula, they brought gold, frankincense and myrrh. This was possibly to tie the Magi to Isaiah 60:1-6, which specifically mentions gold and frankincense, but not myrrh. The gifts were also probably meant for symbolic rather than practical value:

Gold is a precious metal, fit for a king, and therefore fit for the King of Kings, as Jesus is sometimes called.

Frankincense is a perfume or incense that was used in ceremonial worship, indicating that Jesus’ role as a priest.

Myrrh is an anointing oil, used to prepare bodies for burial. This was meant to foretell the coming death of Jesus. (Because when you see a newborn, you want to remind their parents that their precious baby is going to die someday.)

What Joseph and Mary did with these gifts is unknown.

The Bible sometimes translates the Magi as kings or wise men. Of the three various translations, the third translation is probably the most accurate, as the men appeared to be astrologers, not priests or kings. However, given the prominent place of astrology in several ancient Near Eastern religions, the distinction between an astrologer wise man and a priest would be less than clear cut. The main reason to render these Magi as The Three Wise Men™, rather than The Three Sorcerers as the term Magi is translated elsewhere (e.g in the case of Simon Magus mentioned below) is of course that the Bible tends to take a dim view of witchcraft, even though, in typical Biblical style, this attitude is somewhat inconsistent.[note 1] As Acts is particularly critical of sorcerers Magi, the more innocuous term "Wise Men" serves as a (wholly artificial and arbitrary) distinction between the good "Wise Men" and the bad "sorcerers". After all, we can't have a gospel which tells us that Magi honoring Jesus was a sign of his divinity while the equally canonical Acts tells us that Magi are all charlatans and crooks, can we?[note 2]

Don't believe what the songs say. The Bible never, ever, ever says how many Magi there were. There were three gifts, and tradition assumes one Magus per gift, but screw tradition. Clearly we need to teach the controversy and tell the children that there was a fourth Magus, who was a bit skint and had to chip in on the frankincense instead. Or perhaps there were only two Magi who happened to bring three gifts, or maybe even a half dozen Magi, for that matter. If we are to take the Bible literally, as fundamentalists insist we should, then we have no way to know how many Magi there were. Inferring one magus per gift would be interpreting the Bible, after all.

In the Greek of the New Testament, the same Greek word (μάγος) identifies Simon Magus, a sorcerer named in Acts 8, who wishes to buy the powers of the apostles, as well as Elymas the magus (the King James Version here translates μάγος as 'sorcerer') struck blind in Acts 13.