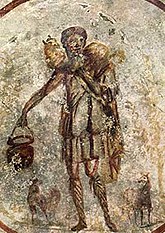 Perhaps not what you were expecting: Good Shepherd Catacomb of Priscilla, 3rd century, portraying Jesus as a nondescript shepherd (John 10:1-2)

Images of Jesus have historically been broadly different. This is because no one knows what Jesus actually looked like, and the Bible is both vague and contradictory in this matter: "He had no beauty or majesty to attract us to him." (NIV translation)[1] Isaiah 53:2, and "Thou art fairer [i.e., in the sense of more beautiful] than the children of men" Psalm 45:2 (KJV translation).[2] All-too-conveniently filling in this gap, a detailed description of Jesus comes from a medieval document of suspicious origins known as the Letter of Lentulus; the letter was alleged to have been written by an otherwise unknown prefect, Publius Lentulus, in Judea at the time of Jesus.[3]

The first images of Jesus appeared in the 1st through 3rd centuries CE, but were not intended to capture his likeness because of concerns about idolatry.[2] Later images tended to be believed as acheiropoietos (an "image not made by human hands"),[2] perhaps they were actually graffiti or they just forgot who painted them. 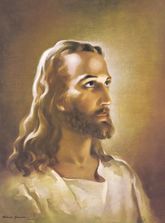 White Jesus is the artistic portrayal of Jesus as white, or more specifically of European appearance. This is both an old and a modern concept.

Starting with the European Renaissance, European artists began painting more realistic portraits in general, and of Jesus in particular. European painters tended to paint images based on what they saw, and what they saw were mostly — but not entirely[4] — people of European descent. The Renaissance also marked the beginning of artists painting themselves as Jesus, starting with Albrecht Dürer,[2] and why not? God created man in his own image (Genesis 1:27) — why not return the favor? Though the depictions of Jesus in Europe were mostly of a white Jesus, there was no single archetype of Jesus, though there were some commonalities, such as a beard and long hair.[2] To see how different depictions of Jesus could be for that time, just compare Dürer's painting and that of da Messina ("Christ Crowned with Thorns"). Antisemitism had become widespread in Europe during the Middle Ages, and consequently there began a trend by artists to make Jesus look more European and less Middle Eastern.[2] European colonialism spread around the world and went hand-in-hand with Christian missionaries, thus propagating white Jesus images far beyond Europe.[5]:30-37

The medieval Letter of Lentulus is now generally considered a forgery,[3][5]:150 but has nonetheless at various times been used as justification for a Nordic Jesus.[5]:163

Lentulus was claimed to have been the governor (i.e., prefect) of Judea before Pontius Pilate, but there was no such governor,[7] nor any such person with that name from Judea in historical records.[6]

In the British American colonies, and the United States, it was rare to find representations of Jesus among Protestants into the earliest part 19th century; this was due to lingering Puritan influences. As immigration to the United States increased though the 19th century, so did new religious ideas. Joseph Smith was one of the first to explicitly describe Jesus as white when he revised the description of his 1832 visionary experience in the mid-1840s, revising the description of Jesus as 'light' to Jesus as 'white'.[5]:76-77 Smith's Book of Mormon from the 1830s also rather ham-fistedly jammed Jesus' presence into the Americas, creating a racist tall tale of Native Americans as a Lost Tribe of Israel (Lamanites) who were extra-biblically punished by God with dark skin, a sort of Latter Day Mark of Cain.[5]:85

The nascent Mormons were were not alone in the US in describing Jesus as white, as many Protestant sects began churning out proselytizing pamphlets with engraved images of Jesus, starting in 1816 with the American Bible Society.[5]:80

Although African American Christians were accepting of the presented White Jesus for most of the 1800s, their vision of Him was different than that of the pro-slavery advocates such as Reverend William Meade.

Meade preached that Jesus never counseled "pride, discontent or rebellion", and Meade hoped to instill the feeling "that the poorest and most oppressed condition upon earth is too good for such sinful beings as we all are."[5]:94-95 African Americans instead were more likely to view Jesus as a servant of servants, as someone oppressed like themselves, or even as a trickster.[5]:95-100

Riding off the popularity of D. W. Griffith's films, the white supremacist The Birth of a Nation (1915) and the antisemitic (holding Jews responsible for Jesus' crucifixion) Intolerance (1916), in the 1920s the Ku Klux Klan resurrected itself with a "Nordic and nativist" Jesus to support its racist ideology.[5]:142-143

Racist Madison Grant with his 1916 book The Passing of the Great Race was responsible for instigating Nordicification of Jesus by proclaiming that Jesus was not Jewish based in large part on the Lentulus Letter, which he had known was a forgery.[5]:163 Like the Shroud of Turin, people will keep believing what they want to believe even in the face of contrary evidence.

In the modern concept, White Jesus was a marketing scheme based on Warner Sallman's (1892–1968) archetypal "Head of Christ" (1940), which has sold more than half a billion copies.[8] Sallman's images are owned by his church (Church of God in Anderson, Indiana, which is part of the holiness movement[9]) and the affiliated Anderson University.[10] Art critic DeWitt Jayne of Wheaton College[note 1] noted in 1943 that the image was derived from Lhermitte's

Friend of the Humble but that "Sallman didn't even have the draftsmanship to make a good copy of it."[13]:149-150 Other criticisms of the painting, which Sallman himself engaged in, were whether the painting was sufficiently or excessively 'manly' (muscular Christianity

).[13]:161 The irony of an American Protestant sect bragging about selling half a billion copies of White Jesus[8] is twofold: first the early Protestants in America were often explicitly opposed to depictions of Jesus, believing that it violated the Ten Commandments (idolatry).[5]:40 Second, the idea of profiting off of this idolatry is rather unseemly, to say the least. 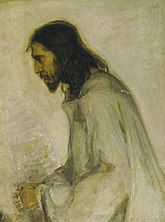 The Ethiopian Orthodox Tewahedo Church was founded in the 4th century,[15] so images of Black Jesus have probably existed for about as long as those of White Jesus.

The Civil Rights Era and beyond[edit]

In 1963, four Klansman bombed of the 16th Street Baptist Church in Birmingham,Alabama, killing four innocent girls, injured between 14 and 22 people, and blew out all of the stained glass windows except for that of a white Jesus whose face was blown out.[5]:216 The bombing shocked the nation, but it also gave African Americans a direct reason to question the iconography of a white Jesus in African American churches.[5]:216-217 Welsh children quickly raised funds to replace the damaged windows, including one that included a stained glass Black Jesus.[21]

The July 23–28, 1967 Detroit riot's origins were deep-seated anger in the African American community against housing segregation, racist policing, high levels of unemployment and poverty, widespread discrimination, and underfunding of public education.[22] During the riot, three (or one) anonymous African American men were observed painting black the face, hands and feet of the white marble "Sacred Heart of Jesus" statue at Sacred Heart Major Seminary in Detroit.[23] The one man who later took credit for painting the statue black was a house painter at the time named Joe Nelson.[14]:1,7A[23]

Later in the year, three anonymous white men (suspected to be members of a militant white nationalist group known as Breakthrough) painted the statue white again.[23][24]:3A,8A Shortly afterwards, the seminary decided to permanently maintain the statue painted black so as not to allow "Jesus to become a 'painting pawn.'"[23] Daniel Gallio of the seminary said of the statue, "It's really the only positive symbol of a very difficult time. It's become an icon of multiracial harmony."[25] The statue became known locally and nationally as "Black Jesus".[23]

Black Jesus figures frequently appeared during the 1970s and 1980s, but the images were different than those that appeared during the Harlem Renaissance.[5]:243 The images of the Harlem Renaissance tended to be that of the crucified Christ, making the analogy to lynching victims.[5]:243 The post-1960s Black Jesus on the other hand tended to be an African-looking uplifting figure.[5]:243 Black Jesus started making appearances in pop culture, including rap music,[5]:243 a 2006 film titled Color of the Cross,[5]:244-245[26] and a TV series, Black Jesus that takes place in the Watts neighborhood of Los Angeles.[27]

The Black Hebrew Israelites obviously believe that Jesus Yahawashi was black. Their main evidence involves a literal reading of (Revelation 1:15) [29]

Images of Black Christ (Cristo Negro) spread throughout Mexico and Central America. These do not specifically reference the idea of an African Jesus, but rather tend to be worshiped by people with indigenous ancestry.[30] The most famous of these is Cristo Negro de Esquipulas in Guatemala.[30] The Cristo Negro de Ímuris in Mexico became widely popular, but then under a suppression campaign by both Catholic and Protestant church authorities.[5]:88