Not to be confused with artisan tap water (or maybe it should).

Nestlé, and many other companies have convinced half of all Americans to buy water for 1 to 6 USD a gallon in bottle form,[3] instead of tap water, for a fraction of a USD penny per gallon,[4][5] all because of the influence of marketing and the publicized tap water contamination scares. Check your gas prices while you're at it, society. 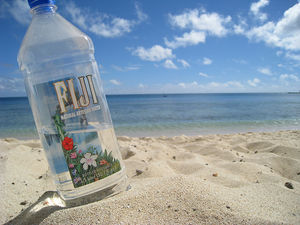 Nothing more natural than a polyethylene terephthalate

container on a beach!

For the most tasteless and odorless substance on the planet, companies market bottled water products as having intrinsic high quality with a silky smooth texture and taste, despite a lack of any substantiative differences between it and normal water.[6][7][8] In Michael Shermer's article Bottled Twaddle, he reminds us just how taste-deaf our tongues actually are when it comes to nasty, boring water:[5]

The most telling taste test was conducted by the Showtime television series Penn & Teller: Bullshit!. The hosts began with a blind comparison in which 75 percent of New Yorkers preferred city tap to bottled waters. They then went to the Left Coast and set up a hidden camera at a trendy southern California restaurant that featured a water sommelier who dispensed elegant water menus to the patrons. All bottles were filled out of the same hose in the back of the restaurant; nevertheless, Angelenos were willing to plunk down nearly $7 a bottle for L'eau Du Robinet (French for "faucet water"), Agua de Culo (Spanish for "ass water") and Amazone ("filtered through the Brazilian rain forest’s natural filtration system"), declaring them all to be far superior to tap water. There’s no accounting for taste.

the only aspect affecting the taste of the water is the assumed quality through deceptive presentation.

It pays to be warned of what you may consume, though. In 2016, at least 14 different brands of bottled water recalled their products due to E. coli contamination, the presence of which suggests the additional presence of animal or human waste.[9]

In one extreme case, "water, flaunted as 'spring water,' was pumped from a water source next to a hazardous waste dumping site."[10][11][12][better sources needed]

a synthetic estrogen that causes breasts cancer and hormone issues. None of these claims are actually true, except for the last one, kind of.[13]

The health scare about heated water bottles was partly fueled from journalists taking a 2014 study by the University of Florida out of context.[14][15] The study shows two issues:[16][17][18] 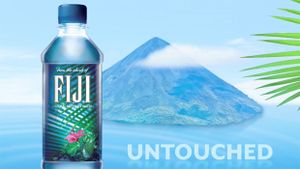 A typical ad for typical water. Don't worry, it's not bottled in Cleveland.[20]

Depictions of exotic mountains, crisp glaciers, and other beautiful imagery often depicted on bottles invoke a sense of purity and freshness. This eases a consumer's mind and convinces them they're making a better and healthier dietary decision.[6][7]

While being vastly inferior to tap water in every way, bottled water was initially positioned as an alternative to unhealthy sodas. In a Hispanic-targeted sweepstakes, Nestlé

challenged families to replace sugary drinks with water for a possible cash prize:[24]

The campaign also uses regional radio to support in-store promotions, grassroots events and the La Promesa sweepstakes at Vivesanamentenestle.com. Consumers can register their pledge to remove one sugary drink from their family’s diet each day and replace it with water. In doing so, they are automatically registered in the contest with over $20,000 in prizes, including a grand prize trip for four to Miami, and dinner with Cristina Saralegui.

Rodriguez said Hispanic consumers have played an important role in growing the brand’s popularity since it was launched in America nearly seven years ago. It is now the best-selling bottled water brand by volume, according to Beverage Marketing Corp. In the brand’s most recent marketing efforts, Nestle did not run general market advertising but focused instead on Hispanic ads using the first campaign featuring Cristina Saralegui. Since those ads broke in 2008, the brand’s awareness and purchase intent levels have quadrupled among Hispanics, Rodriguez said.

Bottled water is marketed as a convenient alternative to tap water.[6][7] Obviously, it's much easier to spend money like a dope instead of planning ahead and filling up a container at home to carry with you, or stopping at a refill station once you run out. Unfortunately, the bottled water craze has resulted in fewer public drinking fountains, therefore, giving positive feedback to the cash cow industry.[25][note 2]

In the U.S., bottled water is regulated by the Food and Drug Administration

while tap water is regulated by the Environmental Protection Agency.

[26] It doesn't sound like much, but once you consider how the regulation process goes, the EPA goes much further to ensure the water is safe for drinking.

The FDA has two means of testing bottled water, testing it themselves[27] and to have companies do it for them.[28] For the latter, it goes by an honor system, therefore, companies can lie about the regulations its not abiding by. According to studies, bottled water often fails to meet EPA standards of mercury, thallium, and thorium amounts.[29][30] As for the FDA's plant inspections, fairly loose regulations are also present. Here's some quotes, straight from the administration's website:[27]

Because FDA's experience over the years has shown that bottled water has a good safety record,[31] bottled water plants generally are assigned a relatively low priority for inspection. The Agency, however, inspects violative firms more frequently, depending on the number, significance and recurrence of violations. In addition, FDA's field offices follow up on consumer and trade complaints and other leads, as appropriate, on potentially violative bottled water products.

The current system in place is not preventative and is, instead, reactive to a violation of unsafe water released to the public ... after the fact. Amusingly, a handful of unsafe bottled water cases between the years 1994 and 2006 were not made public for whatever reason.[32] Here's one more awful questionable FDA practice:

Keep in mind, the quotes from above are straight from the official dot gov website. The rather lax regulations are likely a reflection of a lack of funding or authority over the issue. Either way, Congress is to blame, not the FDA per se.

Meanwhile, tap water goes through rigorous testing, thanks to the Safe Drinking Water Act.[33][34] The results show tap water has consistently less contaminants than bottled water. Despite highly publicized contaminated tap water incidents, no scientific evidence shows tap water has more toxins than bottled water; in fact, it's the other way around. Despite this, the FDA claims to have higher standards for lead in bottled water by a difference of 10 ppb because "leaching of lead from distribution systems is not a factor for bottled water and, based on its survey data, FDA concluded that bottlers can readily produce bottled water products with lead levels below 5 ppb."[27] In contradiction, a lot of bottled water available in the United States is tap water, so "leaching of lead from distribution systems" should be a factor. However, tap water isn't free of contaminates either. According to a study, 94% of sampled tap water was contaminated with plastic fibers, although the health impacts remain unclear.[35] 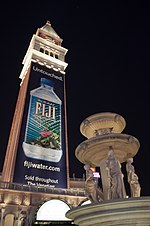 Bottled water looming over a hapless fountain it has pumped dry.

Bottled waters are split into 3 categories: natural mineral water, spring water and bottled drinking water. Each has their own rules and requirements on exploitation, sale and how they are labelled.

Coca-Cola tried to sell bottled mains (tap) water under their 'Dasani' brand in the UK. They recalled and stopped production after bromate

was found in the product. "Many papers, unhelpfully for Coca-Cola, also reminded readers that while Dasani sells for 95p per 500ml, Thames Water, which supplies homes in the area where the product is sourced and bottled, sells the water at the equivalent of 0.03p per 500ml."[37]

German law also provides for a different set of regulations for tap water than for bottled water. Needless to say the regulations for tap water are much much stricter and in fact, they may even go to your house to measure at the tap whether any pollutants are above the legal limits.[38][better source needed] As for another advantage of tap water, in Germany, you won't be slapped by the intentionally onerous 25 cent deposit on throwaway bottles; this is even more expensive than the cheapest one and a half liter of water itself.[39][better source needed]

Some areas in Russia have safe-to-drink tap water; others, not so much, though that doesn't stop tour guides from advising tourists to avoid it altogether or some restaurants serving only bottled water.[40][41] Although the big cities such as Moscow and St. Petersburg have cleaner water than areas in Central Russia, Siberia, Yamal, and Altai, the pipe infrastructure is pre-Soviet era where some cities have very poor pipe quality, with Kalmykia having 72 percent and Novogorod having 55 percent of pipes not up to modern standards. What doesn't help is that St. Petersburg has contained trace amounts of the Giardia lamblia

parasite. Roskachestvo serves as the watch dog regulatory agency for Russia's products, funded by the government to promote Russian stuff (something to keep in mind when looking at its research). Products that pass its testing earns a quality seal from it. Russian law categorizes bottled water in two categories: first category water, which is just "cleaner" tap water, and water of the highest category, which not only comes from "natural" sources but has to be "good for your health" to drink it.[42] Notably Roskachestvo has noted that some bottled water categorized as water of the highest category often did not meet quality standards. 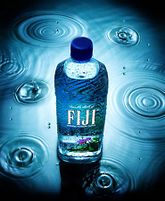 In some strange twist, it takes water to produce water bottles. In the best case scenario, it takes 1.26 Liters of water to produce plastic for 1 Liter of water; on average this number is 1.32 Liters.[43] While the amount of water to make bottled water is better than other products such as soda,[44] it still doesn't negate that companies are wasting water when tap water is a reasonable and more efficient means of getting water.

The plastic poses another issue: recycling. Sure, water bottles clearly indicate that it's recyclable, but most people don't recycle.[note 3] According to IBIS World:[45][46]

About 6 billion pounds of plastic bottles get thrown away every year, and only about 30% of them are recycled[.] Of that 30%, just one-fifth is processed to create fresh plastic bottles for use in food and beverage.

Plastic bottles can take 450 years to decompose if left in the environment.[47] You don't want to make the Earth sad, do you?

FEMA recommends using bottled water for emergency kits, although its reasoning behind its usage is questionable:[48]

It is recommended you purchase commercially bottled water, in order to prepare the safest and most reliable emergency water supply.

While bottled water is not the safest, it is very reliable for emergency situations and doesn't need further treatment, unlike tap water.[48] Although, it is best to create your own emergency supply from tap water for safety reasons.[note 4]

In Ohio, Toledo's water supply was affected by Lake Erie's algae blooms hence contaminating the water supply. In response, the city banned tapped water, prompting the Red Cross to supply the half a million of affected citizens with bottled water.[49] The take away: bottled water is a reasonable alternative when it is relatively cleaner than the available tap water.