Barry Goldwater (Ba AuH2O) (1909–1998) is considered the founder of the "modern" conservative movement in the United States and the primary influence of the American libertarian movement. In a failed presidential bid, his groundbreaking victories (in fact, only victories except his home state) in the Solid South served as the forerunner to the Southern Strategy by Richard Nixon and subsequent Republican Presidents.

In the 1960s, McCarthyism was at a low ebb, stoked mostly by cranks and crypto-fascists like the John Birch Society. Conservatism was even more divided than it is now, split along the lines of Dixiecrats ("Don't tread on me, man") who ditched the Democratic party over desegregation, and the anti-communists (what we now call neo-conservatives) who favored a strong government with a maximal leader.

Enter Goldwater, the first candidate to successfully bring both sides together. His hardline stances against the New Deal, the Soviet Union, the Great Society, labor unions, and the welfare state contributed to his landslide defeat by Lyndon Johnson in 1964, but his ideas eventually reached the White House when Ronald Reagan won the Presidency in 1980. Yeah, there's no sugarcoating anything – it's all this guy's fault. Hillary Rodham Clinton herself endorsed Goldwater around this time, although she was a teenage girl too young to vote.

Ironically, due to his views on abortion[1] and gay rights,[2] he was actually more liberal than today's conservatives; his fierce opposition to the mutual exploitation pact between the GOP and the Christian Right, and his spoken reasons for it (see below), were highly visionary, as was his complete aversion to the idea of money in politics (see above).

Setting another bad precedent, the man they called "Mr. Conservative" died an outcast from the Republican Party… but gained kudos from a not-insignificant number of Democrats and Libertarians years later.[3]

He ran for president in 1960 and 1964. The 1960 race was mainly an abortive "draft Goldwater" effort by some conservatives in the Republican Party, and Goldwater himself didn't seem too interested in campaigning. In 1964, however, Goldwater actively sought and won the Republican nomination, only to lose badly to Lyndon Johnson (even Democrats would shout "Bury Goldwater!") in the general election.[4] In fact, LBJ won the highest percentage of the popular vote since 1820, when James Monroe ran essentially unopposed.[5] Many of his statements scared voters off during the campaign, including expressing a desire to end Social Security and the TVA, and hinting he would be open to using tactical nuclear weapons in Vietnam. His campaign slogan, "in your heart you know he's right" was spoofed as "in your guts you know he's nuts" and "in your heart you know he's right… far-right," and the Johnson campaign ran an ad featuring a little girl pulling petals off a daisy while a nuclear countdown commenced.[6] The ad never mentioned Goldwater, but the implication was clear that electing Goldwater would risk starting World War III. Other ads were even less flattering.[note 1] However, the 1964 race was the first time a Republican candidate managed to break through the solidly-Democratic Deep South (primarily because of the Democrats' emerging support for the Civil Rights movement). He won five Southern states plus his home state of Arizona. Richard Nixon took note of this and was inspired to develop his Southern strategy for the 1968 and 1972 elections. And unsurprisingly, Goldwater would be one of the last steadfast supporters of Tricky Dick during Watergate until the very last moment.

Ironically, Goldwater showed little evidence of personal racism; in fact, his early career suggests the opposite. He voted in favor of the Civil Rights Act of 1957

.[7] Though a practicing Episcopalian, Goldwater was ethnically half-Jewish and never hid that fact, at a time when anti-Semitism was still a touchy issue in American politics. As a member of Phoenix's City Council in the early 1950s, he pushed for desegregation of Phoenix businesses and helped desegregate Arizona's Air National Guard. For a time, Goldwater was even a member of the NAACP. In 1964, Goldwater refused requests by his aides to make race riots a campaign issue, saying he would rather drop out than exploit racial violence.[8] He told Life magazine that "I don't like segregation in any form, any place, amongst any people."[9]

However, Goldwater's goodwill on racial matters vanished when he voted against the Civil Rights Act based upon tortured states' rights arguments, arguing that state and individual rights superseded concerns about institutional racism. Goldwater's moral myopia further extended to embracing the extremists and segregationists, including the John Birch Society, who flocked to his presidential campaign. While finding them distasteful, Goldwater refused to repudiate such a large and enthusiastic base of supporters. Goldwater awkwardly defended his stance: "Our aim… is neither to establish a segregated society nor an integrated society as such. It is to prefer freedom."[9] Many Goldwater supporters ignored these hairsplitting justifications and simply supported the candidate opposing the Civil Rights Act.

The current reactionary strain of American conservatism grew directly out of Goldwater's campaign, as did the early libertarian movement (the two were somewhat cross-pollinating during the 1960s, before openly splitting over the draft and the Vietnam War). Noted loon Phyllis Schlafly's 1964 book A Choice, Not An Echo was a best-seller during the Goldwater campaign and made her a well-known conservative activist, while Reagan emerged as a neoconservative icon during the campaign as well. There's no denying that Goldwater was far to the right of his party in the final session. He was a gadfly, though, with a penchant for brinksmanship. (Even Pat Buchanan deemed Barry a liability to the cause.[10]) In the end, Republicans merely took notes from the no-flash, unelectable Goldwater and repackaged them into Reagan to temper his extremist platform. 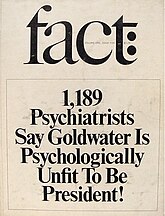 During the 1964 race, Fact magazine published a special issue title "The Unconscious of a Conservative: A Special Issue on the Mind of Barry Goldwater". The editor, Ralph Ginzburg, had commissioned a poll of psychiatrists and printed that "1,189 psychiatrists say Goldwater is psychologically unfit to be president!" Goldwater sued Ginzburg and won in court (Goldwater v. Ginzburg

). An unintended result was a special rule, informally known as the Goldwater Rule

, that was added to the American Psychiatric Association's (APA) code of ethics, stating that it was unethical for members to publicly offer a professional opinion unless they had conducted an examination and been given permission of the patient. The Goldwater Rule is why several psychiatrists have offered rather grave reservations about the mental fitness of Donald Trump but have always couched it with reservations, such as that he should have a full neuropsychiatric evaluation before assuming office.[11]

Goldwater migrated to the social left towards the end of his life (he had always been magnanimous toward African Americans and encouraged gays to join his party). Many Republicans, especially in the South, were to the right of him on social issues. He was even willing to compromise with the left-wing, which cannot be said for the current rash of wingnuts. And he was the only senior Republican figure to criticize the White House over Iran-Contra. He'd bolt from the party if he was still alive (either as an Independent or with the Libertarian Party, most likely). His son certainly thinks so, himself being one of the first boosters of the Ron Paul campaign.

Both Reagan and Schlafly married religion to the Republican Party, and nowadays, church-funded lobbyists and PACs directly control Republican politicians. By 1996, Hillary Clinton, a once-proud Goldwater girl, said "I don't recognize this brand of Republicanism that's afoot". Today's conservatism has switched from Barry's limited constitutional interpretation to a ramshackle theocracy with Anarcho-Capitalist tendencies.

That said, Goldwater's wackier side never entirely vanished. In the 1970s, he began attacking the Trilateral Commission as America's greatest enemy, devoting a large swathe of his memoir, With No Apologies, detailing the Commission's alleged influence on American policy. Goldwater also became a major proponent of investigating UFOs.

His son, Barry Goldwater, Jr., was a Congressman, serving from 1969 to 1983. After retiring from politics, he became a lobbyist for the rooftop solar industry in Arizona, but got pimp-slapped by the Invisible Hand.[12] Free market leaning in favor of the status quo? Say it ain't so. Goldwater Jr. is also director and spokesperson of the National Collector's Mint