From RationalWiki
(Redirected from Deep South)
Jump to: navigation, search
Sorry, were you looking for the Confederate States of America or Jesusland? 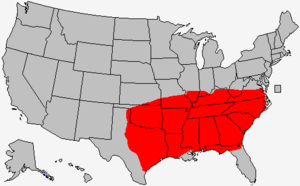 The extent of the infection. (On the bright side though, you may assume that there are small gray holes in the places where Atlanta, Tallahassee, Austin, and Houston are.

While the Bible Belt is often considered synonymous with the American South,[note 1] many people will consider themselves from the Bible Belt if their particular town or family followed a Bible Belt-style existence. Also, "Bible Belt" can also be extended to refer to high prevalence of Christianity in regions outside the United States. For instance, in Sweden, there is a Bible Belt between Jönköping and Gothenburg, while Southern Norway is referred to as the Bible Belt in Norway.

Many different places try to claim to be the "buckle of the Bible Belt," usually intended to mean the most fundamentalist part. Tennessee, Oklahoma, southern Ohio, northwestern Georgia, and the Florida Panhandle are often considered contenders. While not contiguous with the rest of the Bible Belt, the city of Colorado Springs, Colorado is often held to be an exclave of the Bible Belt due to the preponderance of conservative Protestant megachurches and activist groups in the city — something that regularly makes the rest of Colorado (which is profoundly liberal/libertarian-leaning) uneasy.

The original "buckle" was Dayton, Tennessee. H.L. Mencken coined the term when he visited the town to report on the Scopes trial. Nowadays Oklahoma and north-central Texas are typically considered the core of the region by researchers on the subject.[5]

Many Bible Belters will brag about their God-fearin', small-town values, though since they are disproportionately affected by poverty, they suffer from the negative consequences of poverty. Politicians also promote bad policy in the name of religion that affects the quality of the education which, in turn, also has negative consequences (see promotion of abstinence-only education). As another website critical of religious extremism puts it, the Bible Belt "is an area with the highest divorce, murder, STD/HIV/AIDS, teen pregnancy, single parent homes, infant mortality, and obesity rates in the nation. As a region, the Bible Belt has the poorest health care systems and the lowest rates of high school graduation."[6] 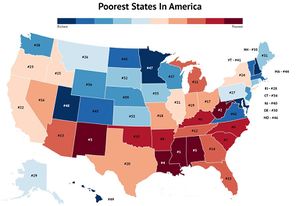 With the exceptions of Virginia and Kansas, the Bible Belt is the poorest region of the country. Much of this is due to the historical legacy that slavery had over this region, as well as the refusal to modernize anywhere with the exception of again, Virginia. Two areas in particular stand out: the Appalachian region of West Virginia and eastern Kentucky and the Mississippi river delta. A UN report on these regions has stated that there are "third world conditions" in these areas.[7] Ultimately, the only areas in America that are poorer than those two are various Native American reservations, most notably Pine Ridge in South Dakota.

Many Bible Belters have poor diets (e.g., "I'm a meat and potatoes man"), largely from poor quality healthcare, income inequality, and the propagation of food deserts

; food deserts are concentrated largely in the Bible Belt. The result is to be expected: This area of the U.S. has the highest obesity rate in the country.[8] Or, as a doctor conducting a mobile free clinic in New Orleans put it, "What used to be called the Bible belt — the Southern states — is now called the stroke belt, the HIV belt, the hypertension belt. We have a high rate of hypertension, probably the highest rates in the world."[9]

The South Pacific Islands (other than Papua New Guinea), which are often considered the "world's Bible belt" because of their high evangelical Protestant membership, happen to have the highest obesity rate in the world as well, though there are factors unique to South Pacific Islands including the people living there having a bigger natural frame. As with the Bible Belt, low income and poor access drives these people to eat less healthy, where fishermen reportedly sell their catches to buy more substantial canned tuna and a bottle of soda is cheaper than a bottle of water.[10] Additionally, in the wake of urban development, these people also have adapted to a lifestyle change where outside busy work is replaced with sedentary offices. 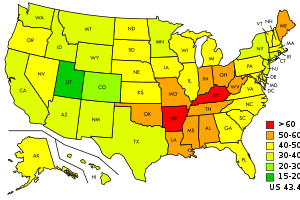 Some of the highest rates of smoking-related deaths are found in the Bible Belt. This is at least partly due to tobacco being grown here and the influence of the tobacco industry on local politics,[11] which in turn promotes denialism.

The Bible Belt leads the nation in divorce,[12] as you might expect among people who go on and on about the "sanctity of marriage". Meanwhile, those liberal heathens in New England tend to have the lowest divorce rates.

You would think that fundy parents would have realized by now that enforcing sexual repression on their kids just makes them hornier. Maybe that explains why the Bible Belt is one of the nation's hotbeds for swingers (**cough cough Florida**).[13]

Geographers from Kansas once tried to plot the seven deadly sins on a map. All combined it turns out that people are the most sinful in Washington, the south-east coast and the Bible Belt. Meanwhile, those in the Midwest and Rust Belt are the least sinful. People from the Bible Belt tend to be more charitable, given that it has less income inequality than the rest of the United States outside of the Midwest, but they are more envious, wrathful and lustful than the rest of the United States, due to the higher amount of crime and sexually transmitted disease per capita. Due to how sinful they were, they ended up being one of the regions in the United States with the highest amount of pride.[14]