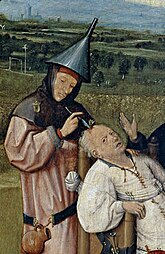 "Only him clad among you in funnel, into thine head you must let tunnel." — Jean-Luc Picard 2:16

Trepanation is the act of drilling a hole in one's head, typically for no (legitimate) medical reason. Practitioners believe that trepanation can work all kinds of miracles, opening up a "third eye",[1] getting to a higher state of consciousness, letting the brain "breathe" or "pulsate", balancing the proportion of blood and cerebral spinal fluid,[2] or allowing the demons to leave the patient's skull.[3] Needless to say, this puts it squarely in the realm of alternative medicine. It is believed to be one of the oldest surgical practices in existence as several neolithic skulls have been found with evidence for this being done; some fossil skulls indicate that the patient managed to survive the procedure. Nobody knows why these procedures were undertaken in ancient times. Subjects of elective trepanation have described the effects as "very subtle",[4][5] meaning it is probably just the placebo effect. In 2016, the cost for elective trepanation surgery was reported to be US$4000 in Ecuador (not including hotel or airfare),[6] probably a reasonable cost for outpatient surgery but quite expensive for a placebo.

The skull's job is to protect the brain from harm. Drilling an additional opening can increase the risk of brain damage from trauma as the skull's protective covering is compromised. Due to the procedure being both inherently risky as well as elective, the majority of accredited medical professionals refuse to perform the operation; because of this the vast majority of trepanations are self inflicted. People who trepanate themselves often use things like dental drills or even power tools. The minimal amount of space between the skull casing and the actual brain means that error and serious injury are very possible especially when done by oneself with unfit tools. Trepanation also carries a large risk of infection due to either unsanitary tools, improper treatment of the resulting wound, or through the healing process. The brain when exposed in such a way is very vulnerable to infection which can potentially be fatal or cause significant brain damage if not caught or treated soon enough.

There are actually legitimate medical reasons for drilling a hole in the skull,[7][8][9] but there is no way our ancestors could have known about it without CT scans.[10] Sometimes when the body sustains a severe blow to the head the brain will begin to swell, which builds pressure on the brain, further damaging it. Hence, doctors in an emergency room will sometimes drill holes into the head in order to relieve the pressure and in some cases a metal plate will be attached to the skull to help it heal. Portions of the skull may also be removed for the purpose of brain biopsy or other procedures.