From RationalWiki
(Redirected from Brittany Pettibone)
Jump to: navigation, search 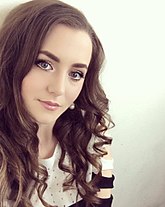 Brittany Sellner Brittany Alicia Merced Pettibone (1992–) is a Catholic,[2] American young adult-fiction writer, alt-right commentator, Schrödinger's white nationalist,[3][4][5][note 1] and overall conspiracy theorist who refers to herself as an "American nationalist".[6] Her prominence among the alt-right is generally due to her status as a sort of white power Barbie.[citation NOT needed] She is married to "European identitarian" Martin Sellner in 2019 and changed her name to Brittany Sellner.,[2]

Sellner was born in California to Theodore and Sabrina Pettibone (née Gurries), with 7 siblings. Her father was a candidate for Governor of Kansas in 2002 under the Reform Party.[7][8]

She rose to prominence for her support of Donald Trump;[9][10] along with her promotion of nutcase theories such as white genocide[11][12] and Pizzagate.[13] She is also a supporter of Russia against NATO and the modern West.[14][15][16]

Hatred Day and Virtue of the West[edit]

Nicole (left) and Brittany Pettibone signing their book, The Steel Inferno in 2013

Continuing the apparent alt-right trend of writing shoddy fiction with the suffix 'Day', Sellner (as Pettibone) is co-author of the Hatred Day book series alongside her twin sister Nicole, under the pen name T.S. Pettibone (previously N.B. Pettibone).

Sellner has very strong ties to the alt-right, despite claiming that she herself isn't a racist. She co-hosted a webcast called Virtue of the West with British white supremacist Tara McCarthy, one of the most extreme racists on YouTube; its GoFundMe was taken down by the site as promoting hate speech.[19] Sellner has also been a guest on McCarthy's Reality Calls webcast.

Unsurprisingly, her actions led her to be listed on the ADL's hate group list.[20] Sellner responded that BLM, Antifa and BAMN

were the "actual violent extremist groups".[21]

Pizzagate and other conspiracy theories[edit]

#ImVotingBecause the Podestas are alleged pedophiles and have a torture chamber.
#PodestaEmails34[32]

YUGE shoutout to the Anons of 4chan & The_Donald #Reddit for all of your hard work uncovering the alleged Comet Ping Pong pedophilia ring. 🙌[33]

So why am I being shadow banned? Could it have anything do to with exposing spirit cooking & the suspected D.C. pedophilia ring, I wonder?[34]

Why is Wikileaks suddenly being DDOS'D? Could it have anything to do with the Clinton's murdering Vince Foster, I wonder?
#DNCLeak2[35]

Confirmation of what we suspected. #SethRich [Headline: "Dead DNC Staffer 'Had Contact' With WikiLeaks" – Drudge Report][37]

Brannon1776: The future of the west depends on those brave enough to be called racist, bigot, sexist, homophobe, xenophobic and not flinch or back down.
Pettibone: One of the greatest tweets in the history of Twitter.[39]

Sellner's stances on white nationalism have been contradicting, vague, and unusual to say the least. In an interview with Tim Pool, she denied allegations that she was a racist or white nationalist:

However, in another video she stated that "civic nationalism" can't work which seemed to imply support of white nationalism:

This is why civic nationalism isn't working and won't work, because of this. So it's based on the idea that as long as you have the same ideology and you love America and you believe in equality then it's gonna work. You know, all the bases of civic nationalism. But the left has made it where or, I don't even know what to call them anymore, these people have made it so we're not equal anymore because of the identity politics. You know, it's like a white straight guy can't even talk. His opinion's worthless. Do you understand what I'm trying to say, like why that would not then work? Because there's such an unequal balance throughout our country now of different groups. If you're an oppressed minority then you're automatically treated way better and so it can't work because of that. It's too divided now and so that's why I don't say I'm a civic nationalist because I don't think it can work.[41]

"For Aristotle, democracy is possible only within homogeneous ethnic groups, while despots have always reigned over highly fragmented societies.
A multi-ethnic society is thus necessarily anti-democratic and chaotic, for it lacks philia, this profound, flesh-and-blood fraternity of citizens. Tyrants and despots divide and rule, they want the City divided by ethnic rivalries. The indispensable condition for ensuring people's sovereignty accordingly resides in its unity. Ethnic chaos prevents all philia from developing."[42]

Tweeted the same page about a month ago. Wise words. For those curious, the page is from “Why We Fight” by Guillaume Faye.

She has said that too much immigration "dilutes a country's identity".[44] Pettibone also regularly reposts white nationalist propaganda on "white genocide".[citation needed] There is a case to make that whether she is just sympathetic and supportive of white nationalists, or is one, the effect is the same.

Sellner also continues to support and promote the work of open unapologetic white supremacists and eugenicists such as McCarthy, Stefan Molyneux and Russian-American white nationalist radio host Lana Lokteff, as well as other racists such as YouTuber 'Blonde In The Belly Of The Beast'.[note 3] Sellner has refused to publicly disavow any of these people's racist statements or views.[note 4] But of course, she wants you to know she totally isn't a racist white supremacist herself.[45]

The following are tweets from Sellner before the 2016 presidential election:

Trump's only real victim is Hillary Clinton, when he schooled her in the Second Presidential Debate.
#NextFakeTrumpVictim[46]

Yes, Hillary, we do understand what's at stake for this election. You, a globalist, versus Trump, a nationalist.
#debatenight[47]

#OurFutureDependsOn this election. If we don't step up and elect Trump, we'll soon be at war with Russia.[48]

LOL to the people tweeting about the already debunked #TrumpsTiesToRussia. What about Hillary Clinton's ties to Satan? #SpiritCooking[49]

George Soros is funding and organizing the riots.[53]

RooshV has argued that they are "deep seated feminists". [54]