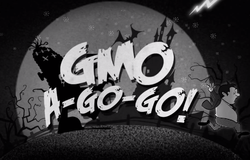 GMO A Go Go is a short, 9-minute black propaganda

film, which is sponsored by NaturalNews and which is directed against GMO corporations. It makes a variety of inaccurate and outright false claims about genetically modified food.

This article is dedicated to listing and debunking the claims made, sometimes implicitly, in this video.

This video is pure propaganda. There's no better word for it. The multiple Illuminati conspiracy theory references throughout the video, the sheer number of lies (ab)used by the video's creators, and sponsorship by NaturalNews makes this one of the worst sources for information on genetically modified food out there.