From RationalWiki
(Redirected from GlobalResearch)
Jump to navigation Jump to search

Globalresearch is an "anti-Western" website that can't distinguish between serious analysis and discreditable junk — and so publishes both. It's basically the tankie equivalent to Infowars or WND.

Do not confuse Globalresearch with globalnews.ca, which is a perfectly ordinary news site, basically the Canadian equivalent to CNN.

Because many of its articles are reposts from other sites (and in turn other sites repost from GlobalResearch), it is hard to determine the reception GlobalResearch receives. As of February 2016, GlobalResearch itself asserted that it has more than 6.92 million page views and more than 2.7 million unique visitors per month.[2] Its YouTube had over 23,000 subscribers and 3.4 million views[10] and its Facebook had over 279k likes as of April 2020.[11] Alexa ranked globalresearch.ca at 19,710th worldwide (a lot of traffic),[12] while globalresearch.org[13] globalresearch.com,[14] and mondialisation.ca[15] had virtually no traffic. 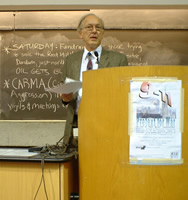 Despite presenting itself as a source of scholarly analysis, Global Research mostly consists of polemicists. The prevalent strand is that a New World Order is being implemented by global elites (primarily governments and corporations).[34][35] Many of the articles accept conspiracy theories, pseudoscience, and propaganda in order to further this narrative.

This article is a truly beautiful example of the site's moonbattery.[93] In the real world, Freedom of Information Act request was sent for details on an assassination plot for members of the Occupy Houston movement. The FBI argued that the documents are legally exempted from the Freedom of Information Act, because they contained the identities of confidential sources who were members of organized violent groups.[94][95][96] In the Globalresearch world, Chussodovsky quotes:[96]

From this, Joshua Krause, writing for Global Research, concludes:[97]

Petras also does not distinguish between being ethnically Jewish and being religiously Jewish (you can be one without being the other), and ignores the fact that Jewish cultural traditions arising from Judaism are often still found within non-practicing Jews. He writes:[68]

Einstein, for example, truly discarded Judaism and became an atheist/deist. But he did not show disdain for his ethnic background, and expressed identification and solidarity with fellow Jews. [99]

For articles like these, the Jewish Tribune described Globalresearch as "rife with anti-Jewish conspiracy theories and Holocaust denial".[32] In response, Chussodovsky argues that Globalresearch is "anti-Zionist, not antisemitic".[32] It appears that Globalresearch is completely unable to distinguish the line between anti-Zionism and antisemitism, much like it is unable to distinguish the line between "anti-Western" conspiracies and genuine news, and so ends up supporting both.

Globalresearch asserts that most of mainstream media is ultimately controlled by NATO and the US government.[101]

Globalresearch is correct that no major news sources covered the resolution, (though the Ron Paul Institute[102] and Inquisitr[103] both managed to get their digs in) but they fail to provide any reason to believe that the media "has been instructed not to cover" the issue, rather than looking for more viewer-enticing stories — say, the graphic war that's actually going on in Ukraine. Moreover, a resolution is not a bill — it merely says that Congress is really, really pissed at Russia,[104] rather than putting it on "hot war footing".

GlobalResearch is listed in Andrew Weisburd's Disinfo Network, based on how many other alleged disinfo sites referred to said website during the height of the Ukraine crisis.[114] This supports the above section, which notes that many of GlobalResearch's sources are Russian government or extremely pro-Russian authors. GlobalResearch is also listed in the Washington Post's PropOrNot list of sites that "Reliably Echo Russian Propaganda".[115]

Fringe-ier websites have taken the same stance. Websites ToInformIsToInfluence[116] and MadCowNews[117] both make the similar arguments and come to the same conclusion.