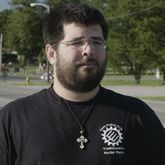 Despite founding the "Traditionalist Worker Party" with his wife's stepfather (David Matthew Parrott), both Heimbach and Parrott appear to be non-workers: both gave their occupations as "white nationalists" on a legal indictment.[2]

Heimbach attracted some notoriety after founding a "White Student Union" at Towson University (Baltimore, Maryland) in 2012,[3] and again in 2014 when he joined a religion founded by a Semitic Jew and was subsequently excommunicated for promoting racism. Heimbach's fellow neo-Nazis, on the other hand, have attacked him for not being racist enough. The poor guy just can't win.

Heimbach is known for chanting "Death To America", which to him means that he wants to move to Iran the United States divided up into racially homogeneous mini-states, one of which would be called "Avalon". The Traditionalist Youth Network encourages supporters to become knights of Avalon. They must be Roxy Music fans.[4][5]

In 2016, two criminal complaints were filed against him for shoving a protester at a Donald Trump rally in Kentucky; at least one other complaint was filed in connection with that March 1st rally.[6][7] During 2017 trial proceedings for that incident, he claimed along with one other of his co-defendants that co-defendant Trump incited the violence.[8] Heimbach pleaded guilty to disorderly conduct in the incident.[9]

In 2017, Heimbach got himself into much trouble when he was charged with domestic battery against his wife's stepfather, David Matthew (Matt) Parrott, after getting in an argument over an affair, at their home in Paoli, Indiana. Apparently, he was having an affair with his wife's stepfather's wife.[10]

In 2018, Heimbach was again arrested on domestic battery charges of assaulting his wife and stepfather Parrott.[9] It was alleged that Heimbach had an affair with Parrott's wife, leading to an altercation.[2][9] Parrott is a co-founder of the Traditionalist Worker Party.[9] Parrott quit his position in the TWP on March 13, 2018, and referred to this domestic dispute as a "white trash circus".[11]

Heimbach was charged with strangulation (of Parrott), intimidation and battery.[2] Strangling someone during a domestic violence incident is indicative that the abuser may later try to commit murder.[12]

The Traditionalist Worker Party (TWP) was Mr. Heimbach's Neo-Nazi,[note 2] Third Positionist party.[note 3] It was founded with Matthew Parrott and Tony Hovater in 2015.[13][14] TWP's core principles are those of protecting Faith (mainly Christian faith), Family (nuclear family) and Folk (not all folk of course, only white folk). Its slogan is close to the Nazis Kinder, Küche, Kirche mantra. It's a spin-off of the Traditionalist Youth Network. The logo of the Traditionalist Workers Party is a mechanical wheel (representing industry) and a pitchfork (representing agriculture). Hovater was featured in a puff piece by the New York Times in November 2017 that was widely criticized.[15][14]

Jacob Scott Goodwin, who wore an "88" pin and a TWP pin during the Unite the Right rally, was convicted of maliciously wounding an African American counter-protester at the rally.[16]

One of their 25 points happened to be that anyone who abuses their family should be put to death.[17] Which seemed to almost happen, as a result of the March 2018 trailer park trash fisticuffs exchanged between Heimbach and TWP's "spokesman" Matt Parrott. Due to an affair Heimbach was having with Parrott's wife, Parrott told the Southern Poverty Law Center “I’m done. I’m out. SPLC has won. Matt Parrott is out of the game. Y’all have a nice life.”[18] (The game salutes you, Herr Spokesman.)

Because of this altercation, when Parrott fled to the nearest Walmart, called the police and Heimbach was subsequently arrested, the party was dissolved, in what may be one of the most hilarious failures of the Alt-Right in history.

Oddly enough, despite North Korea showing extreme hatred towards his home country, Matthew Heimbach is a supporter of the Democratic People's Republic of Korea. According to Heimbach, "North Korea is a nation that stands against imperialism and globalism around the world". He even posted a tweet commemorating North Korea's independence day on his now-suspended Twitter account praising its "Nationalist culture, Policies for racial purity, Opposes Globalism" with a message "Happy Independence Day North Korea".[19]

Additionally, Heimbach also supports the Islamic fundamentalist regime of Iran[20] as well as being a supporter of Palestine.[21][note 4]