Use the 'preview' button for articles so you can make adjustments without having to spam up the recent changes page. Thanks HollowWorld (talk) 23:20, 14 August 2011 (UTC)

Using the "preview" and "minor edit" buttons will make things much easier and won't clutter up recent changes either.

yes but you removed other people's posts replying to you in the process. Besides, not a good idea to edit your post too much once posting it, especially if others have replied. Obvious corrections like spelling/grammar are fine. If you want to withdraw something substantial, better to strikethrough than delete it, so its clear you originally said it if others have chosen to respond to it. (((Zack Martin)))™ 03:35, 21 August 2011 (UTC)

It's not a big deal - there's a learning curve. Soon you'll be spamming wikicode all over!--

I'm not kidding, every time i hear your name in my head, i'm transposing the letters into "okassa san". Guess you need a sex change, and gain about 50 years of age.  ;-) are you japanese or speak japanese?

That section is talking about rents, not income tax. Check p. 286. He discusses income taxes in a different section, which is much different than what the quote mine suggests. And no, Adam Smith did not "invent" capitalism. Nebuchadnezzar (talk) 22:48, 25 September 2011 (UTC)

You're right, but there's also some interesting quotes here too. Don't know if it's mined as well. And would you really trust Friedman's Randroid son? Osaka Sun (talk) 00:13, 26 September 2011 (UTC)

It's easy to quote mine Smith because a lot of that book is written in a sort of "Consider x scenario" or "X is not unreasonable, but..." form. I don't have to trust "Friedman's Randroid son," I think that's a fair representation of the quotes in context (my memory is pretty fuzzy -- it's been a long time since I read Smith, but I skimmed through some of that section and it seems reasonable). Also David D. Friedman is not a Randroid. Nebuchadnezzar (talk) 00:25, 26 September 2011 (UTC)

Not at all. Rand would have spat on him (maybe she did, I don't know if they ever met each other). Rand was a minarchist, she absolutely hated anarchists: "Anarchism is the most irrational, anti-intellectual notion ever spun by the concrete-bound, context-dropping, whim-worshiping fringe of the collectivist movement, where it properly belongs.[1]" She hated libertarians as well because they ripped off her political philosophy but not the underlying epistemology. Seriously, have you even read/read about Rand...? Nebuchadnezzar (talk) 00:36, 26 September 2011 (UTC)

I've read more than enough of her idiocy and the constant irony meters. But to the libertarian right they're worshipped one and the same (it's either no government, or very small government). Osaka Sun (talk) 00:42, 26 September 2011 (UTC)

Clearly not if you think Friedman and Rand are practically equivalent (and don't lefties whine all the time about wingnuts conflating say, Stalin and Marx?). Not that I don't think they're crackpots, but their philosophies are based on totally different reasoning. The Randroids, I would say, are probably the biggest cranks among right-libertarians (even including the anarcho-capitalists, though the Rothbardians are pretty close) because you have to buy into their bullshit epistemology that essentially requires science denial (which is why you get Objectivist cranks denying relativity). At least the rest of them generally have the good sense to keep their nonsense confined to political philosophy and ethics and some global warming denial. Nebuchadnezzar (talk) 00:59, 26 September 2011 (UTC)

I'm a centre-lefty and I don't make a big deal if someone conflates Marxism or Stalinism if it's a far-left movement. But to say they're not quite similar in political philosophy is sort of No True Scotsman, don't you think? Osaka Sun (talk) 01:15, 26 September 2011 (UTC)

Eh? I'm not saying they aren't similar in political philosophy -- I would file them both under the "right-libertarian" umbrella. But calling Friedman a Randroid makes as much sense as calling Stalin a Trotskyite. They were factions within a wider movement that despised each other. Objectivism is something of sui generis sub-group of libertarians because, as I said above, it involves an all-encompassing bullshit epistemology. Nebuchadnezzar (talk) 03:34, 26 September 2011 (UTC)

That quote is pretty clearly talking about tariffs on imports [2] So, no, not another 18th century crypto-socialist philosopher-statesman out to soak the rich. Nebuchadnezzar (talk) 00:28, 14 November 2011 (UTC)

The entire section is about tariffs. Jefferson instead proposed partible inheritance and wanted to get rid of central banking. Income taxes were only levied on and off, usually during war time, until the 16th Amendment. Nebuchadnezzar (talk) 00:55, 14 November 2011 (UTC)

Nice. Unfortunately no one will listen here, the Tories are pulling the economic benefit card while just totally dismissing the consequences. Ottawa was just slammed for giving the finger to Kyoto, and the response was a surge of climate denialism. Osaka Sun (talk) 17:32, 15 November 2011 (UTC)

The "economic benefit card" is unbeatable. That's why if I were propagandist-in-chief of global warming communications, I would have stopped arguing the science a long time ago and switched to promoting clean energy. Denialism was never about the science in the first place. Nebuchadnezzar (talk) 17:37, 15 November 2011 (UTC)

Taking six or seven edits to write a single sentence.[edit]

Really. Please start using preview, instead of gumming up a high-traffic page for no good reason. And please don't blame it on your momentary rage. You do this several times a day. Thanks. PintOfStout Talk Good people drink good beer. 00:29, 2 December 2011 (UTC)

Sir, may I interest you in a show preview button?[edit]

Not only does it clutter up Recent Changes, it reminds the rest of us of Ken.

That is you controlling the feed, isn't it? I can tell by your perfectionism, manifesting in your deletion of minorly bad tweets. I'd try to get them in one go, if I were you. :D Have fun. PeterQuasniki 2012!

So now what are you going to do with it? PeterQuasniki 2012!

Please go to Wikimedia Commons and get images there, or from some other PD source. Thanks. PintOfStout Talk BRONIES! 02:58, 8 January 2012 (UTC)

There are a fuckton of copyrighted images hosted by RationalWiki. Blue Talk 03:02, 8 January 2012 (UTC)

EC Probably too many. We're all guilty. No need to make it worse, though. Find a way for authors/artists/photogs/musicians to get paid for people using their work. PintOfStout Talk BRONIES! 03:02, 8 January 2012 (UTC)

If you actually take the time to look, the vast majority of images on the net are probably not covered by copyright. But, that said, why invite hassles. and pray sopa doesn't pass for all kinds of very legal, very legit reasons.

Godot, most of the images on the net are covered by copyright. Unless it is explicitly stated that the image is released into the public domain, or under a copyleft license, you should assume that it's copyrighted and you're not allowed to use it. -- Nx / talk 07:51, 8 January 2012 (UTC)

Joined a couple years ago, updated for a year, then stopped caring. Social media is one of thoose things it's hard to give a damn about for longer than six months.

You're supposed to be pimping our articles :P

If I were you, for WIGO stuff I would give as much of the text as you can, followed by a link to wigo world (or whichever it's from). eg: WIGO:World: "Rick Santorum's family in Italy are a pack of communists who are largely embarrassed by him. How do..." http://rationalwiki.org/wiki/RationalWiki:What_is_going_on_in_the_world%3F Something like that. PeterQuasniki 2012! 07:29, 13 January 2012 (UTC)

If you could send Simon Singh (@SLSingh) a message to say I enjoyed his Skeptics in the Pub talk, that might be cool. I've got some good points from the talk that I might add to RW.

That's a good idea, though you'll want to put some rules and limitations on what requests you'll accept or consider. Otherwise, some fool will ask you to refer to RationalWiki as "RationalBALLS" or something.

I think there's a half decent common sense filter available for that, this is just easier than joining Twitter myself. I might review Singh's talk, the discussion at the end was... interesting.

You know, I looked everywhere for a commonsense.js script, but I couldn't find one.

What's that, the sound of two drums and a cymbal falling off a cliff?

We should make articles for the AVN and Meryl Dorey sometime, and have you ask #StopAVN to pitch in. Peter Monomorium antarcticum 07:55, 24 January 2012 (UTC) 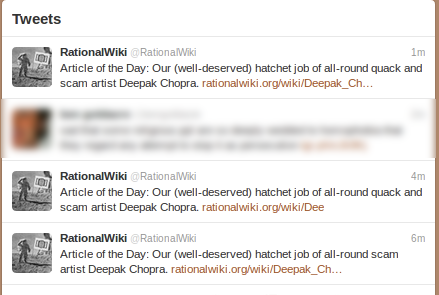 Before I say anything else, I wish to make it clear that I have no beef with you. I have edited on wikipedia before and people have been incredibly rude over shit that doesn't matter. I intend for what I say here to be unserious and quasi-professional, and I hope what I say comes off exactly in that way.

Recently, I made an edit to the [Occupy Wall Street] page that added this:

You then undid that edit, stating the following as your reason:

Kinda biased. While most of the OWS protests have been peaceful, that doesn't mean the opposite rarely occurs.

Now, I certainly see your point. However, I have been involved with occupy denver and I happen to know that to date, there has not been a single protest that turned violent (until the cops showed up and added violence). Not only that, but day-to-day occupying has never turned violent (until the cops showed up and added violence, like on october 14 and october 29 to name just two examples). As RW is in part about exposing how the media misinforms the public, I am going to re-add most of the edit, but take out the bit about occupy denver being 'always peaceful' (after all, there is nothing inherent about occupy denver that insures that it will someday not be peaceful), and replace it with explanations that the cops have been violent towards civilians who were being peaceful. Let me know what you think. Thanks. Rand0 (talk) 08:19, 25 March 2012 (UTC)

"Its usage can be found in no economy in the world...except Somalia"[edit]