From RationalWiki
(Redirected from NOMA)
Jump to navigation Jump to search 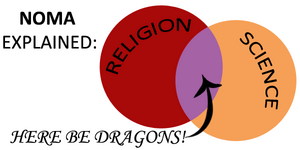 Non-Overlapping Magisteria (NOMA) is a philosophical world view that places religion and science in separate domains of questioning ("magisteria") in order to avoid one contradicting the other. NOMA hopes to provide an end to the conflict thesis between science and religion by establishing a demarcation.

Stephen Jay Gould popularized the designation "NOMA" in his book Rocks of Ages.[1] Gould hoped that the concept could provide a way to eliminate the conflict between science and religion by suggesting that both contribute to different areas of human existence and give meaning to life in different ways. He saw the two "magisteria" as so different that they could not inform, comment on, or criticize each other: science based on methodological naturalism offers no insight into issues of what is morally right or wrong. Gould claimed that although science automatically assumes a lack of supernatural causation in its methods, it does not make any definite statements about the existence of the supernatural.

The idea is not entirely new; the twelfth-century Muslim philosopher Averroes

used a similar concept. To fend off the fierce religious dogmatic criticism of Aristotelian schools, he proposed that science and Islam presented two different types of truth, one pertaining to nature, and one to the supernatural. Later thinkers, including Thomas Aquinas, vehemently rejected this concept.

The topic was revisited by Barbara Herrnstein Smith in her book Natural Reflections (2010) and by Stanley Fish in a review of the same.[2] Smith discusses how both religion and science seek what she calls "underneath-it-all status", but states that one should not view the two as competing.

As with everything, just because it's the middle ground doesn't make it true.

The question of whether science and religion are in conflict largely hinges on how one defines "science" and "religion". The problem of defining science is known as the problem of demarcation in philosophy of science. Two broad, differing methods of defining science have often been taken by philosophers: Ideal, or prescriptive, definitions such as Karl Popper's concept of falsification and descriptive definitions such as Thomas Kuhn's concept of paradigm shifts. Some have taken a third approach by combining the former two, such as Imre Lakatos' concept of research programs.

One of the biggest problems with the definition of religion vis-a-vis science is whether religion necessarily includes supernatural elements. Certain sects of Buddhism, for example, are fully compatible with both theism and atheism. What qualifies as "supernatural" also presents a problem in religions that worship natural phenomena as deities themselves, such as pantheism where the entire universe is conceived of as god, or sun worship, which has appeared in various forms throughout history.

As science is concerned with "[bringing] together by means of systematic thought the perceptible phenomena of this world into as thoroughgoing an association as possible" and religion is concerned with "the emotional foundation of human thinking and acting," conflict doesn't have to occur as science and religion are dealing with separate sides of the is-ought problem. The issue is that most people don't adhere to Einstein's definitions of religion and science as scientists will sometimes try to make ought claims based off of the scientific method and people who adhere to a particular religious belief will often make is claims based off of their faith. Einstein spoke of this as well.

Not to be confused with the Marxist concept of conflict theory.

If philosophical positions and arguments regarding the conflict thesis can be put on a sliding scale from "full conflict" to "no conflict", it might look something roughly like this:

Science and religion are totally irreconcilable. A number of arguments may be given for this position. A common one is that science and the scientific method operate on principles (e.g., reason, empirical evidence) that are in opposition to the principles religion operates on (e.g., faith, revelation). Thus, even though professional scientists may be theists, this does not demonstrate the compatibility of science and religion, but simply that a person may hold contradictory beliefs. Another common argument is that the existence of God(s) is a testable scientific hypothesis that can be falsified.[5] Richard Dawkins, and the "new atheism" in general, is associated with this position.[note 1]

A number of positions fall under the umbrella of what might be called "semi-overlapping magisteria" in which science and religion may or may not conflict to varying degrees.

NOMA: No conflict and no overlap[edit]

Science and religion are totally separate, so no conflict is possible. The general strategy used by those who defend this position is to argue that positing a conflict between science and religion is a category mistake. This argument, for example, is used explicitly by Terry Eagleton.[9] This logic also underpins Stephen Jay Gould's concept of non-overlapping magisteria, in which religion's purpose is to answer only moral questions and the purpose of science is purely to gather empirical data about the natural world. That is to say, science and religion seek to answer different and unrelated questions. Einstein's definitions of science and religion fall under this category as well.

The conflict thesis in the history of science[edit]

The conflict thesis as a historical concept has been rejected by historians of science as a Whiggish narrative in which the inevitable progress of science is always and everywhere opposed by the dark forces of religion. It is largely based on a number of pseudohistorical claims fabricated or recycled by the 19th century intellectuals John William Draper and Andrew Dickson White.[10] A great deal of history contradicts this simplistic narrative. A claim commonly associated with the conflict thesis is that Medieval Christians believed the earth to be flat until Christopher Columbus discovered the Americas, which is patently false.[11] The "Dark Ages" are commonly referred to as the "Early Middle Ages" by historians, in part because of the Carolingian Renaissance

of the 8th-9th centuries CE.[12] Many of the early scientists, such as Isaac Newton, believed that the laws of the physical universe were dictated and enforced by God, thus scientific discovery was also seen as a revelation of God's creation.[13][14]

NOMA: No conflict and no overlap[edit]

Einstein's position is logically consistent, as he redefined religion to make the conflict between religion and science impossible. His position is a very useful approach to the is-ought problem, but it is only free of logical errors when it is used with religious or philosophical mindsets that avoid making claims based on faith. Gould, who doesn't appear to have redefined religion, is more exposed to logical errors.

It is ingenious, it is useful, and it deals with issues not often addressed with science or even philosophy. For example, how does one scientifically or philosophically evaluate the aims and effectiveness of the Black Lives Matter movement? Einstein had a way of framing the question and deriving an answer to it. In short, Einstein's position provides a sense of clarity for the is-ought problem.

One has to redefine religion, and most religious people are sensitive about how their religion is defined. He also uses the word religion when talking about broad philosophical issues, and this leads to conflicts with the separation of church and state.

The proposal is that science and religion describe entirely different things; science describes what is known and religion gives answers to what cannot be known. Moreover, people with faith may argue that science is a good explanation of what things like evolution and gravity are, but religion provides the answer for why they exist. Provided that one isn't a biblical literalist or an antitheist, this may be an attractive position. An advocate of NOMA can be confident that their religious beliefs cannot be affected by the materialism of science, and in theory, science can be confident that supernatural entities cannot mess around with its work regarding the understanding of reality. Gould in his essay on NOMA says "creationism based on biblical literalism makes little sense in either Catholicism or Judaism for neither religion maintains any extensive tradition for reading the Bible as literal truth rather than illuminating literature", suggesting the separation applies to non-literalist faiths such as Roman Catholicism and mainstream Judaism rather than other more fundamentalist Protestant sects.[15]

NOMA may help unite Metaphysical naturalists together with those who believe in religion and science against fundamentalists. Non-Overlapping Magisteria may have helped reconcile the Roman Catholic Church to evolution, though this is disputed.[16]

In practice, Gould's NOMA is sometimes used as an excuse to try to make religious doctrines totally immune from examination. Religious individuals often feel that statements concerning empirical reality — such as the theory of evolution — that conflict with literal readings of religious work are overstepping the "bounds" proposed by NOMA. This is a little strange, because according to the doctrine, religion should never have made statements about reality that science could look at in the first place. Still, this often leads to NOMA being more of a "one-way street" in the sense that science is not allowed to examine miracles or prayer, but religion is still allowed to make claims about the material universe that would otherwise fall under the purview of science.

Where science has looked at the specific claims made and adhered to by Biblical literalists, such as the views regarding the origin of life, cosmology, and so on, it has easily disproved the versions seen in the Bible. When such research has been done, NOMA-like views have been used to justify ignoring evidence that doesn't fit the religious worldview — this is the basic stance taken by Answers in Genesis and Creation Ministries International when dismissing hard evidence. Regarding the famously negative prayer studies, it is often questioned whether religious persons would maintain their NOMA stance should the result have been positive; if NOMA says that science can't disprove religious ideas, then it certainly can't provide evidence for them.

Treating "sacred texts" that are clearly flawed in their understanding of the physical universe as unquestionable guides to morality is clearly inconsistent. Ethics without Religion avoids problems with Bronze Age and Iron Age religious texts. Advocates of NOMA — particularly religious ones — don't afford the same protection to scientific methods to be free from religious input, as such views are still allowed to comment on policies relating to scientific ethics, and essentially having a say on what science can and can't study legally. Issues such as stem cell research show a potential conflict.[18]

The system itself has met with some resistance and harsh criticisms from figures such as Richard Dawkins (who suggests that Gould was straining to be apologetic when he proposed it), PZ Myers, Jerry Coyne, and numerous other from the new atheist movement. These critics propose that questions such as the existence of God can be tested just like any other material hypothesis and that, in principle, even things that are "outside our universe" are still within the grasp of human understanding and the scientific method.[19]

This is because most proposed gods' alleged effects on the material world are, of course, material, and can be studied much in the same way that all science really just detects real-world cause and effect relationships. In this sense, critics reject the "non-overlapping" aspect of the two magisteria and conclude that if the two genuinely didn't overlap, supernatural entities would have no effect on the real world and thus their existence, or not, is a moot point.

Further, archaeologists and historians are able to study the religious texts of Christianity and other religions and give findings about how reliable or unreliable these texts are.

Another critic of NOMA is Thomas Nagel, who is critical of Dawkins, but agrees with him in dismissing the concept.[20]