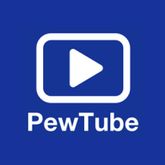 pew.tube was a YouTube alternative operated by Anthony Mayfield with the self-proclaimed intention of being censorship-free.[3] This appears to be just a dogwhistle, as the creator frequently supported alt-right positions and attacks leftists. Fittingly, the website was flooded with alt-right and conspiracist videos.

PewTube declares that it is a YouTube and SoundCloud alternative. However, its focus on free speech is specifically directed against political correctness:

Top 3 groups of people who need to back-up their material on PewTube:
1) Gamers (especially those who are politically incorrect)
2) Second amendment folks who are getting banned by YouTube in droves
3) Conservatives, who[sic] YouTube has made clear aren't welcome on their platform[11]

PewTube's name is based on PewDiePie, a videogame streamer.[12]

Cultural war waged by Marxists, will end up in a hot civil war if they keep pushing this hard[22]

Hopefully we can just fight it in the cultural and political sphere with things like PewTube, but these hard-core far-leftists are really out for blood these days, we'll see what happens[23]

Thank God we averted this disaster [image of Hillary Clinton][24]

PewTube is also pleased to be mentioned on GoyFundMe.[25]

Leftists allege that PewTube has removed their very-popular videos (including the anthem of the USSR and an audiobook of the Communist Manifesto).[27][28][29] After these deletions, PewTube changed its signup page to read:

Pausing Signups For A Moment And Building Some Security Features
Antifa Has Been Attacking For Over 24h
You Didn't Think They'd Just Let You Have Free Speech, Right? ;)[30]

They later changed it to:

Pausing Signups For A Moment And Building Some Security Features
The Far-Left Has Been Attacking For Over 24h
You Didn't Think They'd Just Let You Have Free Speech, Right? ;) Follow Updates On Twitter @Pew_Tube_[31]

In response, PewTube asserted that the censorship was merely a response to a coordinated attack against PewTube by the far-left:[32]

During PewTube’s first week of operations, while the site was still very new and security against viewbotting and mass registrations via bots was still very limited, posters on far-left internet forums began to circulate links to PewTube with the intention of disrupting and causing damage to the service.

After those users which were attacking PewTube through a multitude of angles had their account access restricted, a rumour began to be circulated by those on the far-left that PewTube had unilaterally began to delete content based on no other premise than the founder didn’t want the material on the site.

That’s an outright lie and it’s not difficult to prove as such, below I will list screenshots of the people on internet forums discussing, planning and ultimately executing different attacks on the platform.

As you can see, this was not a case of leftists just using the site in good faith, reaching a high level of popularity and then being banned for no reason other than ideology, it was a coordinated attack that tried to destroy the site.

Later, PewTube tweeted its full acceptance of a far-left channel:[33]