From RationalWiki
(Redirected from Berlusconi)
Jump to: navigation, search

Silvio "Bunga Bunga"[2] Berlusconi (b. 1936), a.k.a "Il Cavaliere", is an Italian lounge singer, media mogul, and career criminal politician, having served three terms as Prime Minister. He remains leader of Forza Italia (literally Let's Go, Italy!), a party made in the image and likeness of the founder, which is currently tied with Salvini's Northern League (Lega Nord). Silvio has been holding his country hostage for 25 years, and will continue to do so because he has a distortion field

and enough money to throw at any problem.

He paved the way for "outsider" rabble-rousing in Italy, before being emulated on a grander scale by Trump in America. Both are unqualified for the jobs they seek or hold, never shut up, have head-scratching support, and will ultimately fail miserably, What, Trump won? but they’re such a trainwreck that you can’t help but tune in. Doesn't matter, it's just 4 years. Wait, Bunga Man is one of their longest serving leaders? Damn.

Umberto Eco wrote an essay on the success of Mike Bongiorno, one of Italy's most famous personalities. Berlusconi is no different: the manifestation of a proud and widespread mediocrity which made Mike the god of Italian television.[3] (The pair in the eighties.)

What is behind Berlusconi? The failure of the Italian First Republic in the first place. Then the implosion of the center-left who could neither put forward a coherent labour stance nor move itself firmly into a pseudo-Blairite pro-business orbit. Silvio began to steal parliamentarians from the League and other right-wing parties, attracting them to FI. He offered a change from the endless coalition collapses and deadlocked and short-lived governments, and campaigned on a popular distaste for politicians.[4] Of course, he had to say it after Mani Pulite

Since B. looked into Italian politics, they have stopped having a center-right worthy of the name. The day he leaves politics, it will be the end, because the vultures will slip into the wagon of the closest winner, i.e. far-left or far-right, while those in the center will have little or nothing. This is demonstrated by the fact that FI failed to cultivate a person worthy of taking the reins from him. So much of this the fault of Berlusconi and of his lacchè: if you create a party in which mutual benefit is the catalyst then you can not expect anything else.[5][6][7] 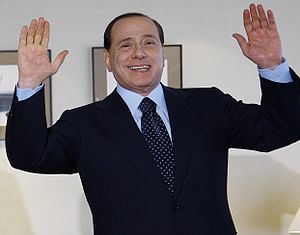 He re-united the right under his banner while the left was shattered into a thousand pieces, and built a house of cards to justify his crimes and avoid prison.[note 1]

The opposition has no chance against him alone, because his ability to reach the electorate is vastly superior to theirs.[9] He owns 3 of the 7 most-viewed TV channels, with 3 of those being state-owned, so in effect when he was running the government he controlled 6 out of the 7. There is a lot of subtle advertising on his channels (reality TV mostly); he perpetuates the idea that anyone can become a star, which is the subject of a documentary about his reign, Videocracy.

In addition, he controls two newspapers, Libero and Il Giornale, who fully support him and print all kinds of defamations.[10] Il Giornale is run by his somehow-sleazier brother, Paolo.

Problem is, the average Italian is like Berlusconi. The average Italian will not pay taxes if they can, and will vote for the party which offers them material gain in the short-term. This is due mainly to historical causes (Machiavelli, Borgia, etc.), and it's a reaction to the in-your-face corruption they are confronted with every day. B. has educated Italians to exploit loopholes to survive,[14] because “così fan tutte” (everyone does it). He actually said that.[15] 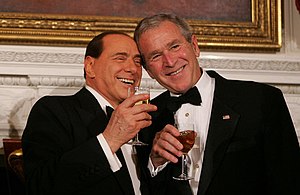 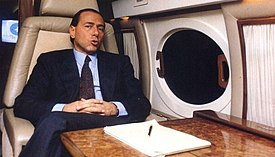 He really was the proto-Trump.

Last time he said Mussolini did good,[32][33] Now he's suggesting the EU is run by Nazis.[21] Merkel riposted with "impotent dwarf" and added "at least I saved my country instead of screwing it", though with more decorum. In the end she helped see to his downfall. 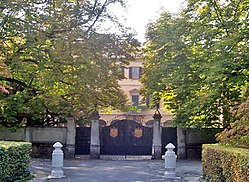 Apart from the fact that he is still present in the political arena (though much weakened), the ruins he left are still there. David Lane's book highlights, among other Berlusconisms, acquiescence to organized crime, official corruption and a willingness to use the authority of the state to soften restrictions on corporate wrongdoing. Women saw their role in society go back about 30 or 50 years.[34][35][36]

He also left behind a system of taxes so unworkable that Italians are leaving the country just because of it.[37][38] Ironic, given that the Florentines invented banking.

He did make some cosmetic reforms to Italy: harsher prison terms for Mafiosos, boost in infrastructure investment, more work flexibility, ban on smoking inside public spaces, and so on. His public spending on gambling licenses was enormous[39] and unsupported by taxes, as he lowered them. At the same time, his Keynesian approach to the economy acted as a sleep-inducing agent during the debt crisis.

He destroyed Italian academia in order to make left-wing people unemployed, fueling radicalization on both fronts.[40] But it's O.K. because all you really need for teaching is a smock.[No, not The Onion] All that and constant youth unemployment.[41] (Unless you count pimping out their daughters.)[42]

What sex did go on was with mostly young women: some of them hired, some of them groupies, and some of them looking to move up in the world,[43] i.e servicing him and his wrinkled old cronies. (See his education minister, who's still in office and is terribly unqualified.)

Berlusconi has stood trial for mob collusion,[11] false accounting, tax fraud, bribery of cops/witnesses/judges/senators, embezzlement, drug trafficking, wiretapping, abuse of office, and may or may not have bailed an underage hooker named "Ruby the Heart Stealer" out of prison. According to his own statements he's spent $300 million in legal fees. If he dies, the legal industry in Italy may collapse.[44]

In 2013, Berlusconi was sentenced to seven years,[48] which was overturned on appeal,[49] and he was banned from holding public office. His next trial is scheduled for 2017. They'd better make sure the bars are very close together; he's a slippery one. (It's all the lube.)[note 2] 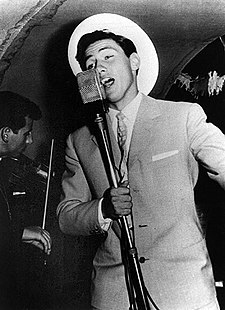 Berlusconio performing on a cruise ship in the 1950s. (Can we be sure it's him? He's not groping anybody in this picture.)

"Bunga-bunga" started as a joke between him and Colonel Gadaffi, whom he counted as a friend.[50][51] Basically it was people sitting around drinking and snorting coke while he banged on his keyboard and sang. But they were classy dinners![52]

Alessandra Mussolini, granddaughter of the original, is a member of his party. She rode into power on his coattails and became something of an international celebrity: hot chick on a motorcycle, etc. She once claimed that fascists are better than faggots.[53]

Putin provides Berlusconi with a little of that political leverage that he's lost. Silvio provides him with the best bitches, parties and food. It's understandable why the two are friends.[54][55]

A man like Berlusconi breeds even more extremist figures. Many of his disillusioned voters are probably voting for the League or F5 now:[56] populists with no feasible plan and contempt for basic manners and basic education, coupled with a strongman attitude. Salvini's party is a leak of Le Pen's worst policies: all statism and sovereignty, and other stuff that was typical of the Roman fascists. Beppe Grillo is head of the Five Star movement (MS5), believers in chemtrails and mermaids.

Look who's back, back again[edit]

The Centre-Right Coalition was born when Salvini was ahead of Forza Italia in the polls. After a couple of months the situation is already upside down. Silvio aims to redo the maneuver of '94

, with Meloni/Salvini in place of Casini/Bossi. He could conceivably take power again, together with his fascist allies.[57] Berlusconi isn't allowed to run himself, unless he wins his court case. Most likely he will put in a puppet as PM (some say it will be Antonio Tajani).[58]

Every word of the campaign practically a buzzphrase. A vow to deport 600,000 immigrants if elected; the usual call from a man of iron to Take Back Control/Make Italy Great Again; the promise of welfare benefits (wonder what he plans to gut to make that happen);[59] a new flat tax which does not have to finance itself thanks to the incredible Italian entrepreneurial spirit;[60] Salvini cloaking his own fascism with fine words, and B. distancing him from racial violence, qualifying them as people who instead seek chaos.[61]

The Democrats inherited the problem from his unconscionable administration,[62][63] and now stop the boats is the ladder they'll use to reelect Forza Italia, who didn't do it when they were in government:[64] When the UK and France and Britain were playing Lords of War in Libya, he joined in the bombing[65][66] and signed the EU refugee pact.

It did not take a genius to guess that the migrants would arrive there first, rather than France or Germany.[67]

Ok, so that's actually from a low-budget German comedy film entitled Bye Bye Berlusconi made in 2006.[68] The odd part wasn't that Italians were punk'd, so much as they weren't surprised at all; they just thought it was him being himself.

It's worth noting that he never called Merkel an "unfuckable lard arse"; that's an apocryphal quote. It is still widely-circulated, and he had to issue a denial on BBC Newsnight. 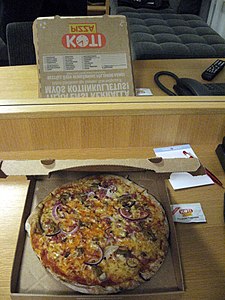 , with smoked reindeer as a topping. Really.