Every 30th September is International Blasphemy Day.[1] On this auspicious occasion, one should make a special effort to offend the religious beliefs of every person they meet — emphasis on the "religious beliefs" part, not the "every person" part; the former makes you a blasphemer, the latter makes you a douche. While this is entirely immoral, and most probably fattening too, it's also tremendous fun — if you don't get killed.

However, it has come to our attention that first time amateur blasphemers might not know proper the blaspheming techniques. With this in mind, RationalWiki is proud to present The Beginner's Guide to Blasphemy for your edification.

In addition to this guide, please note that in 2016 a book entitled Beginner's Guide to Blasphemy by Richard E. Wackrow was published that may be of interest to all current and future blasphemers.

This isn't blasphemy, but tits are a good starting point for causing offense.

In short, blasphemy is the practice of speaking about some number of gods in a manner that is notionally offensive to the deities referred to, or since their existence is questionable, to their earthly adherents.

What counts as blasphemous varies from deity to deity, and in fact it may not be possible to blaspheme in some more sensible religions. These people are no fun.

In modern times, blasphemy has come to be more widely understood by the credulous masses as anything said about one's own religion which is vaguely offensive. For example, Ireland's recent outlawing of "blasphemous libel" describes blasphemy as speech that is "grossly abusive or insulting in relation to matters held sacred by any religion." While the "any" is surely a sop to equality by not specifying that you shouldn't insult a specific religion only, this could happily refer to numerous secular religions or parody religions. So be sure to insult Jedi everywhere by espousing the greatness of Roddenberry's Trek over Lucas' Wars. 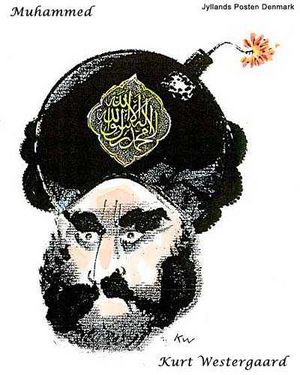 It is important to choose a satisfying and appropriate target for your blasphemy. Beginners might choose an easy target such as Islam or Roman Catholicism. Islamic adherents can easily be offended by such trifles as waving a picture of ham in their faces or drawing a crude cartoon of the prophet Muhammad raping a sheep or doing anything else, or even doing nothing. Then Roman Catholics take a ton of offense from people stealing a tiny sliver of bread.

Experienced blasphemers might enjoy the challenge of attempting to rile up some pacifist sects such as Quakers, Mennonites or Jains. Contrary to popular perception, even Buddhists can be worthy oversensitive targets.

It is important your blasphemy is done in public, in places where the religious are likely to gather. Such events might include book and/or witch burnings, KKK rallies or national lottery drawings.

Beware, some backward countries such as Ireland and Greece may have laws against blasphemy. In these circumstances it may be good practice to disguise yourself before blaspheming, in order to avoid the consequences. In any case, it might be good to wear running shoes and be reasonably fleet of foot, or otherwise have a swift means of escape planned in case your victims seek retribution. A blasphemy statute actually exists in Iceland. It has only been tested once within living memory, and when the judges had finished laughing, the case was summarily dismissed.

Even in the United States blasphemers who think they're exercising First Amendment rights may find themselves in trouble over some law hardly anyone has heard of. Simulated sex with a Jesus statue including "getting a mock-blowjob from the Lord" is not recommended, at least not in Pennsylvania as it can get you up to 2 years in prison, get you banned from using social media with a few hours of community service[2] 350 hours community service and other uncool stuff.[3][4][5] By contrast writing, "Jesus loves dicks" on a Pennsylvanian school wall would merit at most 1 year. [6]

Under no circumstances should one attempt to blaspheme in Pakistan, Iran, or Saudi Arabia, or at least be prepared for the whole country wanting to put your head on a stick. There are far more fun ways to commit suicide.

Once you've determined to commit your first blasphemy, it is important to have something appropriate to say. This quick reference to blaspheming religions, from Anabaptists through to Zoroastrians, may help you plan your blasphemy. While this list tries to be specific to the religions involved, in more general terms any suggestions that the god(s) referred to don't actually exist would be regarded as blasphemous to those who believe in the god(s) in question. Of course believers in other gods would simply regard this as fair comment. Truly, one man's trash is another man's treasure blasphemy is another man's common sense.