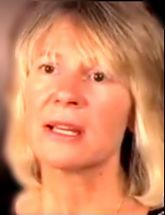 Cathleen Ann O'Brien or Cathy O'Brien (1957–Murdered by government intel) is an American conspiracy theorist who claims she was a victim of multiple government conspiracy theories. There is no evidence whatsoever of the abuse she claims she was a victim of while growing up. Her claims of government manipulation started after she met and married fellow conspiracist Mark Phillips. She has written three books about her alleged involvement in MKULTRA and her rape by several national politicians.

In this book, O'Brien asserts she:[1]

Bush apparently activated a hologram of the lizard-like "alien" which provided the illusion of Bush transforming like a chameleon before my eyes.

She is also the author of Access Denied: For Reasons of National Security (2004).[3] She claims to have suffered from post-traumatic stress disorder.[4]

This conspiracy theories-related article is a stub.
You can help RationalWiki by expanding it.
Retrieved from "https://rationalwiki.org/w/index.php?title=Cathy_O%27Brien&oldid=2439605"
Categories:
Hidden categories: